On December 17, 2020, Prevention Access Campaign (PAC) joins sex workers, allies, and advocates the world over in observing the 17th annual International Day to End Violence Against Sex Workers. As an organization dedicated to ending the dual epidemics of HIV and HIV stigma, and to advancing the Undetectable Equals Untransmittable (U=U) movement, PAC highlights the ways in which HIV-related stigma and discrimination contribute to violence against sex workers, and how that violence undermines the ongoing effort to end the HIV epidemic.  Today, we bring attention to the cause, and every day is an opportunity to take action.

While HIV prevalence is 0.8% in the general population worldwide, it is1

While HIV prevalence is 12.9% among all transgender women worldwide, it is1

Sex workers often face stigma, poverty, and lack of access to health care and other social services—all of which make it harder for sex workers to protect themselves from HIV or to start and continue treatment if they are diagnosed with HIV. As a result, sex workers are at high risk of acquiring HIV and, without access to treatment and protection, passing it on. Social and economic factors contribute to increased HIV risk among sex workers, including homelessness, unemployment or underemployment, incarceration, mental health issues, alcohol and drug use, and emotional, physical, or sexual violence and/or abuse.

Factors arising from the nature of sex work also increase HIV risk. For example, sex workers may earn more money for sex without a condom, and the unequal power dynamics that contribute to violence may also make it difficult to negotiate condom use. Aside from the issue of condom use, economic realities, as well as power dynamics, may make it difficult or impossible for sex workers to know their partners’ HIV status.

PAC calls on government agencies and nongovernmental organizations to support community-based organizations that implement HIV treatment and prevention strategies that support sex workers, such as condom distribution, community mobilization, HIV testing, and coordinated referral networks. We also call on government and nongovernmental stakeholders to support community-based behavioral interventions, awareness efforts, anti-stigma campaigns, and harm-reduction programs that serve sex workers and the communities in which they are based.

PAC strongly calls for decriminalizing sex work. A study reported in the medical journal The Lancet in 2014 found that decriminalization of sex work could reduce new HIV transmissions by a third to nearly a half within a decade. Rescinding laws in the United States like the 2018 Stop Enabling Sex Traffickers Act (SESTA) and Allow States and Victims to Fight Online Sex Trafficking Act (FOSTA) would serve to reduce HIV risk among sex workers by making interactions safer for sex workers as well as clients, improving relations with police, and minimizing fear of talking to law enforcement when abuse occurs. We support laws that prevent sex trafficking while not interfering with consensual sex work.

In order to achieve a more just society, we must end both violence against sex workers and stigma against HIV—intersecting forms of injustice that often impact the very same people. Racism, sexism, misogyny, homophobia, transphobia, social and economic injustice, systems of colonialist and state violence, and all forms of discrimination and oppression must end. It is imperative that sex workers be meaningfully included in HIV and other community policymaking, and to be clear that sex work is legitimate work. On this day, please join PAC in standing alongside sex workers, and in taking action against the violence and criminalization that endanger the health, safety, and lives of sex workers in our community. 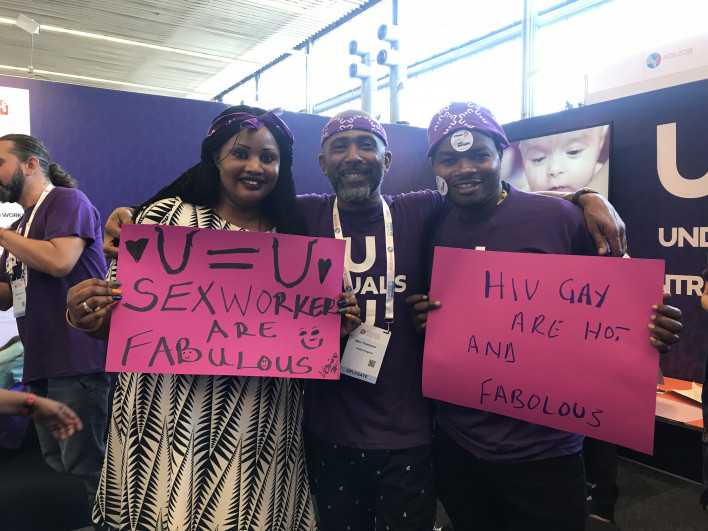 Prevention Access Campaign is a health equity initiative to end the dual epidemics of HIV and HIV-related stigma by empowering people with and vulnerable to HIV with accurate and meaningful information about their social, sexual, and reproductive health. Prevention Access Campaign’s Undetectable = Untransmittable (U=U) movement is a growing global community of HIV advocates, activists, researchers, and over 1,000 Community Partners from 102 countries uniting to clarify and disseminate the revolutionary but largely unknown fact that people living with HIV who are on treatment and have an undetectable viral load cannot sexually transmit HIV.  Among those we work with and support are the sex workers who are such a vital and important part of the community, including the many who are working as sexual health educators.

ABOUT INTERNATIONAL DAY TO END VIOLENCE AGAINST SEX WORKERS

International Day to End Violence Against Sex Workers is observed annually on December 17 by sex workers, their advocates, friends, families, and allies. First organized by Dr. Annie Sprinkle and the Sex Workers Outreach Project USA in 2003, the event was held as a memorial and vigil for the victims of the Green River Killer in Seattle, Wash. Since then, it has grown into an annual international event calling attention to the violence committed against sex workers worldwide, as well as the need to eliminate the social stigma and discrimination that have contributed both to violence against sex workers and to indifference from the larger communities in which they live and work.