Twitter
Facebook
Pinterest
Tumblr
Email
Advertisement
After the DC trip last week I judged a pageant, in which not one but two girls were crowned.  It was the last preliminary before Miss Virginia, and contestants had to have been a runner-up in a previous pageant to qualify.

As a thinblooded judge, the baton twirling during talent made me nervous.  But she nailed it, and ended up taking one of the crowns.  I asked another contestant with ties to Miami if she’d watched Pedro on MTV, since he’s from there.  She had not.  “I highly recommend it!”  I said, knowing I’d have been remiss had I not ended Pedro Zamora Appreciation Week without plugging the movie one more time.

Having done my civic duty as a pageant judge, I kicked back on Sunday with my dad and buddy, Zach, and watched the ultimate in pageantry- Wrestlemania 25!   The first Wrestlemania I ever saw was the third, back in 1987 about a month or so before I tested positive.  Hulk Hogan slammed Andre the Giant, but Ricky “The Dragon” Steamboat stole the show in his match with Randy “Macho Man” Savage. 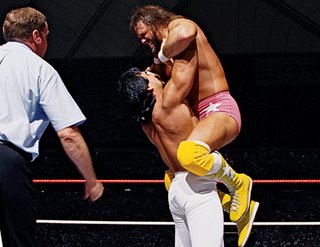 Wrestlemania 3 is one of my last memories of life as a negatoid.  Even though- of course- I was positive at the time, and had encountered some health problems... but, when I was watching Wrestlemania 3, I was doing so through the eyes of someone who had little sense of their own mortality.  Basically, through the eyes of what I was- an 11 year old.

So, I guess this begs the question- why am I still watching wrestling now?

Because it’s awesome!  Especially Wrestlemania.  And especially watching it with my dad, who spends most of the time making fun of the commentators.  Wrestlemania 25 also showcased the comeback of “The Dragon”, wrestling for the first time in about 15 years.  And he stole the show again!  And, I must say, watching Wrestlemania through the eyes of a positoid, who has lived for a long time with a healthy respect for his own mortality, is just as enjoyable as it was back in 1987.

If not more so.