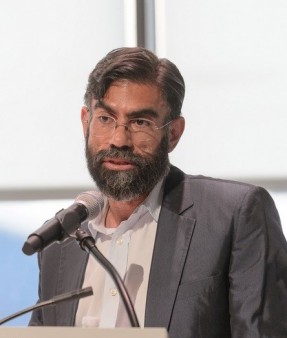 The 11th annual Visual AIDS Vanguard Awards (VAVA Voom) recognize the contributions of individuals who, through their work, talent and dedication, strengthen our communities and reinforce the mission of Visual AIDS. This year Visual AIDS is proud to honor Glenn Ligon, Gregg Bordowitz and Jessica Whitbread.

Visual AIDS: When did you first meet Gregg, and describe your first impressions?

Pamela Sneed: I can’t remember when I first met Gregg. I think back to the late 80’s and early 90’s, and I remember an outline of his face. I can see his dark hair. He was speaking somewhere. He was famous for his AIDS/activism work. Later, I’d heard about him in South Africa/making work about HIV/AIDS. He is legendary. Brave. I feel as if I have always known Gregg. We were both part of a Gay community/communities that were decimated by AIDS. He’s a beautiful man, outspoken, visionary, a freedom fighter and warrior. We have traveled parallel paths.

VA: What do you think is the legacy and continued relevance of Gregg’s art and activism?

PS: Gregg has been vigorously involved in AIDS activism for decades. As a writer, poet, videographer, scholar and former Member of ACT UP (short bio), he has created a more than substantial body of work. He is outspoken and his work as a writer and videographer is seminal in understanding and viewing the history of the AIDS crisis and activism in New York.

He is also a long term survivor. I identify with his mission to document that period of time, seek justice for the thousands of people whose lives touched his/and are unnamed in history. His experiences as a survivor and activist and artist inform him as a director and leader of an MFA program and there is not a student of his that I have met that has not quoted from his work and been transformed by his work, insight, compassion, ferocity and magic of spirit. In this way, he continues to shape and impact a new generation of artists.

VA: You have read poetry alongside Gregg in events he has coordinated including "In The Life“ at the Whitney Museum of American Art and ”AIDS & ITS METAPHORS" with Visual AIDS at Artists Space. Can you describe those experiences?

PS: As a Black Lesbian poet who came of age in the late 80’s and early 90’s, I was very much influenced by and was friends with the Black Gay male poets who formed the Writers Collective, “Other Countries.” A lot of these men died from AIDS. I feel that their histories as men of color along with the women of that generation have been invisible and ignored. So, I was beyond thrilled when Gregg contacted me about the tribute and reading he was organizing at the Whitney in honor of Other Countries. Finally, we were being seen and counted. As I said at the tribute, “I’ve waited almost twenty years for this moment.” At the other event “AIDS & ITS METAPHORS,” I said to Gregg beforehand that I was for some reason feeling more emotional than I did at the Whitney. I knew I was going to speak about the Black Gay Men from Other Countries, losing a close friend to AIDS and I felt sick with grief and fear. Like a father and friend Gregg said to me in response, “Don’t worry, we are all together now.”

At both events that Gregg organized, the readers were intergenerational, bringing together young people, veterans, scholars, poets, and artists. The events were important for those who lost lovers and peers to AIDS, those dealing with the illness, those still impacted by the crisis, and more.

VA: You are involved in Gregg’s MFA program at the School of the Art Institute of Chicago. What have you found most interesting about Gregg’s pedagogical approach?

PS: If you go to the website at the School of the Art Institute Chicago’s MFA in Visual Art Low Residency Program and you look at Gregg’s Mission statement as director, you will see that he states he is interested in Poetics. I think Gregg is the first visual artist I’ve met and certainly the director of an MFA program in the U.S. that understands the vitality and usage of poetry, knowing it is seminal to an educational program. Gregg sees poetry not just as literature, but also as a visual medium and form of intellectual inquiry. This vision is truly interdisciplinary and revolutionary, where one form is not privileged over another.

Claudia Rankine’s Citizen is required reading, and literature, theater, performance, and visual art are not separate. It is truly visionary to understand that the artist speaks in many tongues. Gregg also states in his mission statement that the program will consider the very real problems of governance, and examine alternative histories, and so he has created a program that at its foundation is concerned with the world we live in and examining alternatives, all themes which are progressive and sustaining.

As a Professor in his program, I feel true freedom and innovation.

VA: What is a favorite anecdote you that you have about your time working with Gregg?

PS: Gregg is working on an essay for the Whitney Museum about David Wojnarowicz. I spoke to him about an assignment I was working on for students that included the works of David Wojnarowicz and Audre Lorde. In viewing some of Wojnarowicz’ interviews and reading Audre Lorde, I was very struck by the parallels between the two of them—a white gay man and a black lesbian—two voices that were transformed by illness. In 1992, Wojnarowicz died of AIDS. In 1992, Lorde died of breast cancer. They became the warriors and prophets of our generation, and gave us all art to help us survive. Each endured tremendous suffering. I was interested in how they were both committed to speaking the truth and how when they spoke you could feel it down to your bones. I was telling Gregg the way I feel about them, saying “That’s the kind of teacher I want to be.”

In a line that revealed his tremendous mission statement, Gregg responded, “Me too.”

I am always struck in talking to Gregg, how he can go from such an acute intellectual and seer to a young boy who always appears willing to laugh and play, full of enthusiasm and wonder.

VA: Describe Gregg in a sentence.

Pamela Sneed is a New York based poet, performer, writer and actress whose work has been featured in the New York Times Magazine, The New Yorker, The Source, Time Out, Bomb, Next, MetroSource, Blue, VIBE, HX, and on the cover of New York Magazine. “A six-foot-three-inch-tall black woman with a shaved head, a big smile, and a wily sense of humor, Sneed began making a name for herself in New York in the early nineties as a writer at poetry slams and other performance-art venues while teaching at Hetrick-Martin, an organization for gay, lesbian, and transgendered youth. There and elsewhere, Sneed gave voice to the fraction of the city’s population suffering from AIDS, poverty, and bias-related crimes.” -Hilton Als, The New Yorker

Gregg Bordowitz is a writer, artist, and teacher. His books include DUETS: Stephen Andrews & Gregg Bordowitz In Conversation (Visual AIDS, 2014), General Idea: Imagevirus (Afterall Books, 2010), Volition (Printed Matter, 2009), and The AIDS Crisis Is Ridiculous and Other Writings 1986-2003 (MIT Press, 2004). He has performed his poems and improvisational lectures at such international venues as the Poetry Project (New York), The Whitney Museum (New York), Iceberg Projects (Chicago), If I Can’t Dance (Amsterdam), and Tate Modern (London). Bordowitz wrote and directed the opera The History of Sexuality Volume One By Michel Foucault: An Opera, performed at Tanzquartier in Vienna. His films, including Fast Trip Long Drop (1993) and Habit (2001) have been widely shown internationally. These films are autobiographical accounts of living with HIV that documented AIDS activism. As an activist, Bordowitz was a member of ACT UP New York who contributed to the organization of the non-violent takeover of the FDA in 1988 and clean needle exchange in 1991— among many other acts of civil disobedience. Bordowitz is currently the Director of the School of the Art Institute of Chicago’s Low Residency MFA Program.