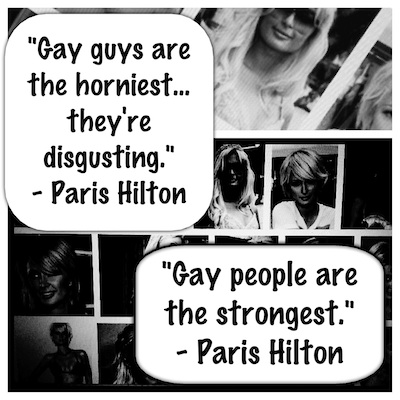 Can you tell which quote above was secretly recorded and which one was not?

Mostly everyone has heard Paris Hilton’s controversial comments by now.  If you haven’t, here’s the scoop.  She was riding in a cab with a gay friend (his orientation matters here) talking about the hook-up site, Grindr.  That’s when Paris went on a little rant about gay men and her thoughts on their sexual appetites.  Her opinion on the matter was capped with, “Dude, most of them probably have AIDS ... I would be so scared if I was a gay guy. You’ll like, die of AIDS.”

You may remember a few years ago Paris stepped in a puddle of water and said she was worried she’d gotten AIDS from it.  She wasn’t being serious, it was a brain fart but it did provide some fodder for me and countless others.  In some ways, we should thank Paris for sparking conversations that reach people who may not otherwise know that you can’t get AIDS from a puddle, or that all gay men are not at risk of dying from AIDS.  In some ways, she’s kind of an accidental Ambassador for AIDS Discourse in America.

What Paris Hilton said was wrong-headed.  Make no mistake about it.  I hope her friend attempted to correct her thinking, even at the risk of being snubbed for a while and missing out on cool parties and shopping expenditures, or whatever it is that Paris occupies her time with.  I also wish the cab driver had challenged her, if he were offended by her remarks... did he start recording her for a reason?  Had she said ridiculous things before that?  Was he offended, or just trying to make money off of her fame?

Either way, her comments brings to light a very real problem because many people feel the same way she does.  Whether or not they think gay men are disgusting, lots of folks still think AIDS is problem that is only faced by the gay community.  Lots of young men in the gay community practice unsafe sex, because they think AIDS is a problem faced only by old men- men in their 40s.  It’s all about perspective, and Paris Hilton’s skewed perspective on this isn’t a rare or novel concept.

So when you hear this story don’t focus your anger on Paris Hilton unless you expected more from her.  Also, if this really caught you off guard then- please- find new people to look up to.