I’ve been involved in the world of HIV since the early days of the epidemic, and for the past eight years or so, I’ve edited the treatment pages of POZ. The combination--knowing friends who are long-term survivors, and having an interest in the science of treatment--has prompted me repeatedly to cover peripheral neuropathy (PN) in the magazine.

In case you are fortunate enough to have ducked this particular side effect of HIV and some of the meds that suppress it, PN describes the constellation of numbness, pins and needles and generally relentless pain some people experience in their limbs. (It can result from diabetes, as well as from HIV and HIV meds, though diabetic neuropathy differs in some ways.)

I always sympathized with those who suffered from PN, thinking it must be hard to live with that kind of chronic discomfort and pain. But until this past summer, I had never actually felt their pain.

Enter the surgeon. With increasing degeneration of the vertebrae in my lower spine, I had no choice but to submit to a seven-hour surgery that, a month later, the doctor told me was “complicated” and “difficult.” Apparently, in the course of those complicated hours, the nerves running down my spinal column were disturbed--producing nerve damage.

The result: A feeling on my lower back that I distinctly recall from childhood, when I got a serious sunburn requiring medical treatment. I remember how any slight breeze wafting over my skin made me shriek in agony. Nothing on the skin itself showed why it hurt so much and so deeply. 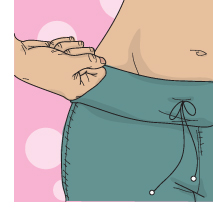 But here I was again, half a century later, ready to shriek. And I couldn’t--still can’t--wear my chosen daily uniform of jeans. Anything that presses on the area in question causes pain that quickly becomes unbearable. Yoga pants (rolled halfway down my butt), here I come. I would wear my jeans pulled down to below my backside, but I don’t think President Obama would approve--he says sagging is passé.

Along with my newfound comprehension of what neuropathy feels like, I also better identify with HIV-positive people who find their health care providers less than helpful. My surgeon looked at me as if I were from a yet to be discovered planet when I tried to tell him that structurally my back felt pretty OK, but the skin was on fire.

His nurse practitioners came to my rescue, at least psychologically, when they told me, “Some patients experience that,” confirming that it is a form of nerve damage, post-spinal surgery neuropathy. How long till it clears up, I asked, and what can I do to treat it? Don’t know, and not much. One nurse did recommend massage; other than that, he said, just be patient.

Fortunately, not only do I study and write about HIV, but I also have a best friend who is an HIV doctor. She suggested vitamin B-12 shots and found me a somewhat helpful topical oil called Neuragen PN (only somewhat affordable, too, at more than $25 for less than a quarter ounce).

Twice a day I rub in that oil, then follow with lavender oil, which helps ease my discomfort mostly, I suspect, by means of aromatherapy. I suspect the Neuragen benefit results as much from massaging the oil into my back as from its homeopathic combination of essences.

So here I sit, in my yoga pants, wondering what will happen when the weather turns cold and the thin leggings don’t protect me. I’m also thinking of how much some people living with HIV have to put up with, without much recognition for the pain they endure. HIV, manageable? Some days, probably, not so much.