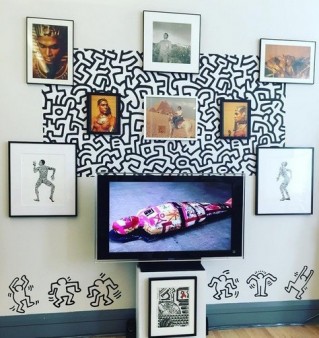 “PERSONS OF INTEREST” A Wunderkammer in a Queer Kunsthalle

An exhibition curated by Sam Gordon for Visual AIDS

As an artist and the curator of PERSONS OF INTEREST, I have been thinking of this exhibition as a wunderkammer, a microcosm of books and objects presented without categorical hierarchies. PERSONS OF INTEREST is a Visual AIDS exhibition within The Bureau of General Services – Queer Divison, that is hosted by The LGBT Community Center. The Bureau, located on the second floor of The Center in Room 210, is a bookstore and event space hosting readings, performances, film screenings, book discussion groups, and workshops.

The queer kunsthalle is The Center, founded in 1983, which also has a museum quality art collection painted directly on its walls. A map of the murals and longterm installations at The Center is available at the front desk, and at The Bureau, for visitors to guide themselves through the building to view artworks created by Visual AIDS artist members such as Arch Connelly, Keith Haring, Tseng Kwong Chi and Martin Wong among numerous others.

The all gender bathroom right next to The Bureau features a wheatpasted poster installation by the collective fierce pussy. The many other rooms of The Center are shared by Recovery and Wellness groups as well as Family and Youth meetings. On the ground floor there is a café. PERSONS OF INTEREST exists as a wunderkammer within this queer kunsthalle in the heart of the West Village.

PERSONS OF INTEREST is an exhibition that generates multiple lists of artists. First the artists whose work is included in the show. Secondly the persons who are portrayed in the photographs, paintings, masks, and sculptures. In the photographs of Tim Greathouse, artists include: Jimmy De Sana, Richard Hoffman, Peter Hujar, Greer Lankton, Nicolas Moufarrege, Dean Savard, Andreas Senser, Sur Rodney (Sur), Stephen Lack, David Wojnarowicz, and self portraits of Greathouse himself. Moufarrege is also represented in the show with his embroidered paintings and an assemblage sculpture. Ben Cuevas’ knit paintings echo the work of Moufarrege, and both artists will be featured in the next Visual AIDS DUETS book series this Fall.

The Polaroids by Lucas Michael feature a contemporary cast of characters including supporters, board members and staff of Visual AIDS, and some of the many artists they have worked with: Justin Vivian Bond, Thierry Dumolin, Alex Fialho, Yvonne Force, Malik Gaines, Sam Gordon, Esther McGowan, Wardell Milan, Jeanine Oleson, Patrick Owens, Doreen Remen, Nelson Santos, and Jerry The Marble Faun. The Polaroid portrait of Jerry from 2015 draws a line through time and space with another photograph of him included here—on his horse named Confetti, in Egypt.

PERSONS OF INTEREST checks the pulse of Visual AIDS and strives to portray an array of artworks by artists from many different backgrounds, some well-known names, others emerging or under-recognized. Self-taught artists such as Raynes Birkbeck, Jerry the Marble Faun and Joyce McDonald bring their handmade and visionary worlds to our attention. Mark Carter, Arnold Fern, Affrekka Jefferson, and Hugh Steers speak to us from the past through their idiosyncratic voices that resonate with urgency today. Luna Luis Ortiz and Frederick Weston create portraits in two and three dimensions, including photography, collage and performance with portrayals of both themselves and their communities.

PERSONS OF INTEREST also takes a look at sex from many angles, from abstract neon glory holes by Lucas Michael and the ghosts of the trucks by Ben Cuevas to the personal rediscovery of one woman’s sensuality after diagnosis and recovery through the work of Joyce McDonald.

A video program with Chloe Dzubilo, Hudson, Hunter Reynolds, and Muna Tseng is presented as a 50 minute loop within the exhibition. The videos all document live performances that range from Chloe Dzubilo’s at the legendary 1990’s queer-punk club SqueezeBox to Hunter Reynolds’ at the Chicago Art Fair last year, and beyond. Viewers are encouraged to sit, watch a video and flip through the books, zines and other publications available at The Bureau. Visual AIDS will highlight titles related directly to artists and themes of the show, mixed in with table-top sculptures and Keith Haring merchandise courtesy of Art Markit.

One subtext to this exhibition are the people left behind and the challenges with archives and legacies. A special thank you to The Estate of Chloe Dzubilo, run by her partner T Delong who shares with us a video, collage and three fascinating mobiles by Chloe. Muna Tseng’s performance ode to her brother Tseng Kwong Chi mirrors my own desire to include Hudson in this exhibition, as homage to someone lost who meant so much.

Organizing books and knick-knacks was one of my earliest explorations into curating. As a boy my bookshelves were a bibliography to be deciphered and the rest of the shelf space was a site for objects, framed photos, toys, anything found in the world, on the street, in a 99 cent store that might have some special, unique quality. That certain je ne sais quoi- and arranged just so. In another life I might have been an interior decorator or done window displays, like Jasper Johns and Robert Rauschenberg as their pseudonym Matson Jones.

Growing up queer in the 1980’s, I felt that desire to be loved for the things one makes, because of the feeling of being inherently unlovable, compounded anew by the fear that sex equals death. Actually, it’s silence equals death. Nowadays the situation has shifted, we live in a world of PrEP—not Rock Hudson chasing around the world for a cure to this thing he had called AIDS, which Linda Evans thought she might have it too, because she kissed him on Dynasty. Today though when even our allies get it wrong sometimes, like Hillary Clinton recently referring to Nancy Regan as an early champion of AIDS awareness, it’s clear that there is still much work and education to be done. Whether Male, Female, Transgender, Straight, Gay, Lesbian, Queer, Black, White, Asian, Latino; the artists in PERSONS OF INTEREST are all connected and invested in the mission of Visual AIDS.

Founded in 1988, Visual AIDS is the only contemporary arts organization fully committed to raising AIDS awareness and creating dialogue around HIV issues today, by producing and presenting visual art projects, exhibitions, public forums and publications - while assisting artists living with HIV/AIDS. Visual AIDS is committed to preserving and honoring the work of artists with HIV/AIDS and the artistic contributions of the AIDS movement. I would personally like to thank all the artists and lenders whose time and interest made this show possible, and Visual AIDS for their dedication and support.