A descent into decadence. But why, and at what cost?

Rageful, filled with anger and resentment, I was on a mission: I wanted to escape my feelings. Why? Because someone I had been interested in had found a new boyfriend and because it was Black Party weekend 2015—the hottest, most decadent weekend of the year—and I was newly single and sober. All of this brought up a lot of self-doubt: Why didn’t I think I was good enough? Why didn’t anyone want me? Was I defective? I was tired of seeking approval and questioning my worth. I wanted a quick solution. And on that morning of March 23rd, 2015, I found it

(BEFORE WE CONTINUE, I SHOULD WARN YOU: THIS STORY MAY TRIGGER ANYONE DEALING WITH DRUG AND SEX ISSUES. PROCEED WITH CAUTION—GOD KNOWS I DIDN’T.)

My mind likes to play tricks on me. See, alcoholism and drug addiction are diseases of perception. In reality, things were going great for me. I had just begun a new journey, touring the country on weekends while I working my new retail job in the Shop at Equinox during the week. The retail job also allowed me free access to the high-end fitness club to focus on my body.

Weeks before spinning out of control, I started traveling with Miss Fame, a contestant from RuPaul’s Drag Race S7. I was her choreographer and dancer. She’d rent studio space, and we’d go rehearse with my friend Chad whom I hired to backup dance with me on the road. It was wonderful. I was this kid, with less than a year of sobriety, whose dreams were finally coming to life.

My online presence started to grow. I started getting more attention from people in the nightlife and dance scenes in New York. Guys started flirting with me left and right because of the wonderful changes happening in my life.

Even with all of the validation, “London” still haunted me—he’s the guy I had been talking to, went on a bad date with, had awkward sex with, and definitely felt nothing for, yet when he ended up in a relationship with some guy from Wilton Manors, FL, I freaked out about it. What was up with that? It’s not like we had that great of a connection. Yet I resented him, and I wasn’t okay with myself for feeling that way. I vaguely remember going out the night of March 22nd, 2015, with my sober friends, trying to feel better. I went home and I resented myself even more, and it ate away at me until that sunny Monday morning after Black Party weekend. 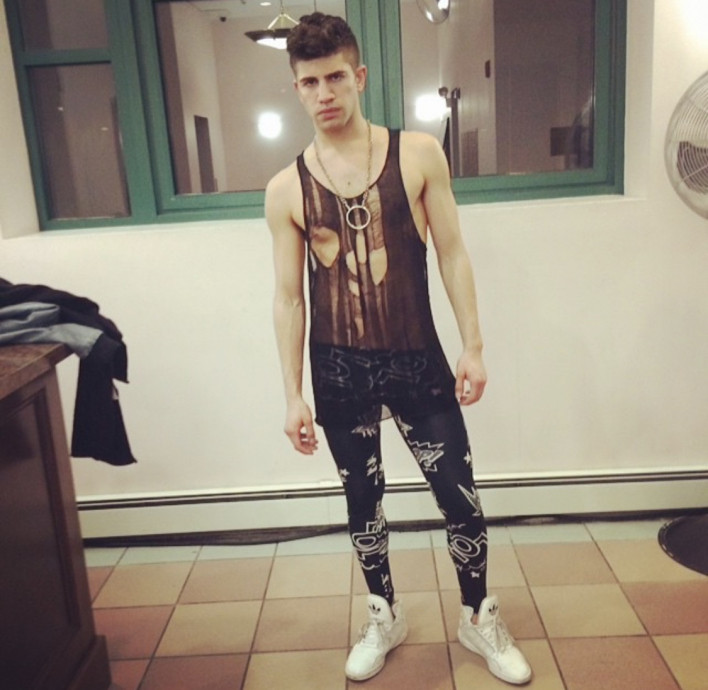 The night before my relapse, I went out with friends and you can see how lost I looked.

That was the morning I decided to score meth and party. But before I headed to down to my hookup, I text my sponsor and friends telling them what I was up to. I’m not sure why I contacted them. Maybe it was a way of saving myself, or maybe I needed attention. I was getting it. The entire train commute from upper Manhattan to Hell’s Kitchen, my friends and my sponsor were texting and calling me. They were worried. They did not want me to go through with it, but my mind was set.

I arrived at this guy’s apartment that I had been talking to online earlier that morning, and all of a sudden I felt weird, really unsure and wanting to escape. I wondered if I could rethink the situation during the time in his bathroom to douche—did I really want to destroy everything I had built? All it took was him suggesting I hit the meth pipe once before showering, and so I did. I tossed my sobriety out the window.

The initial feeling was release. It was like this old friend came back to visit me, but how long would he stay? I remember looking in the mirror and taking a selfie. I looked into my eyes, and all of the spirit had left, my soul just disappeared. My energy changed and my frequency lowered. I had really done it this time, so I thought I may as well dive right in to everything that comes along with my using.

I came out from the bathroom and hit the pipe again and again, needing a bigger fix. Hell, I hadn’t smoked the stuff in almost a year and I was trying to make up for lost time. I proceeded to get on his massage table where he started rubbing me down. Each press and stroke of his hands had my body begging for more, and more was never enough. I grabbed my phone so I could look for more guys to join. The sensation was so great that I couldn’t imagine why I ever gave it up in the first place. I missed this feeling so much, not a care in the world, just being like a lost boy and never growing up.

I wanted more, needed more, of everything. I needed more drugs, more dick, more guys, more more more. The thing I thought was a friend was really a monster. It didn’t even take an hour, but I found myself bouncing from apartment to apartment seeking more. I couldn’t slow down, I needed to speed up. Within a few hours I found myself at the place of my old dealer friend. He had some buddies over and was more than welcoming. I stayed there for hours on end, in the sublevel, dark bedroom. It was like a cave. The only light coming was that coming from the television playing adult videos. Time passed by and I was flying high, covered in lube and deciding what my next move would be, my phone still blowing up with concerned friends. I was beginning to understand why I had put down the pipe before, I couldn’t stop. I was selfish, self-centered, and doing things that I couldn’t explain doing.

I got on my apps and finally found somewhere to go nearby with a really hot group of guys. The host was super sexy, and I wanted to go over, so he invited me. When I got to the door of 33J, I knew that this is where I wanted to be. A luxurious apartment with hot guys who were making me the center of attention. We had sex, smoked cigarettes, and then had to start thinking about moving because the host had to get a few hours of sleep before heading into work. And then it hit me, I had to be at work in three hours. I made sure to get his number as I left with his friends.

Immediately I felt panic. I didn’t want to stop using the drugs. I went to his friend’s place nearby and had more sex and did more drugs for a few hours; if I had stopped, I would’ve crashed. I showered and got ready for work and headed to the train. I hoped no one could see that I was high. On the way into the train, there were cops checking people’s bags and I got nervous. I know I didn’t have any drugs on me, but what if they noticed I was high? I panicked, breathing and praying to myself, “Don’t let them notice I’m tweaking.” I had lube and  a douche and sex gear in my red duffel bag, but luckily no drugs or paraphernalia.

I made it through the checkpoint and hopped on the subway downtown to Equinox TriBeCa. I was running late so I texted my manager that the trains were slow and I apologized profusely. It was fine because I had a good track record. Only running on fumes, I had to pull myself together because even after my shift I had an event that night, too. What was I going to do?

Luckily I made it through the day shift, and the guy in 33J offered me his place on 42nd Street to get ready. I went to his building and showered, lube still in crevices from the shenanigans the day before—silicone really is hard to get rid of. I went back downtown to my job where I used the last of my high to work for me to be social. I danced and entertained everyone for a bit and when I was done, 33J invited me over for a Dominos feast and movie in bed. Obliged by his suggestion, I starting thinking about the type of pizza I wanted.

We cuddled through the night and it felt so good to have a man who wanted me around. It felt good to overlook lower Manhattan from his window. It felt good to feel safe in that moment free of shame. As Big Hero Six played on his big screen television, the view of downtown and Jersey lit the window and my eyes shuttered, I finally gave in and drifted off to sleep.