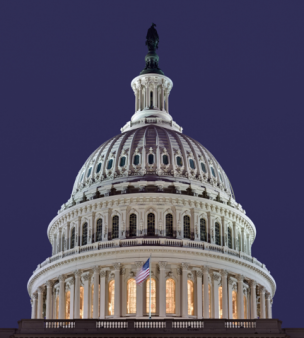 The U.S. Capitol at night

House Republican leadership has been angling to release a funding bill to wrap of the remainder of Fiscal Year 2018 all week. It is now Friday and with a government shutdown only a week away not only is there no vote on the calendar, but there are few assurances that the omnibus will be introduced in time to wrangle enough votes for passage.

House Minority Leader Nancy Pelosi (D-CA) has said she is expecting House Republicans to release their bill sometime on Monday, but just because a bill is released does not mean it is that much closer to passage. Bipartisan funding talks have “locked down” in recent days in the House Labor, Health and Human Services subcommittee according to top Democratic appropriator Nita Lowey (D-NY). At issue are a series of “poison pill” policy riders around funding for Planned Parenthood and Affordable Care Act subsidies, along with potential legislative action on background checks for gun sales and the continuing back and forth between Democrats and the Trump administration over the status DACA and the President’s border wall.

For his part, House Minority Whip Steny Hoyer has said that the best chance for passage of an omnibus before the shutdown deadline next Friday is to strip away all the riders and put forth a clean bill. “Let’s drop every rider no matter who’s for it,” Hoyer said earlier in the week. Such a strategy would safeguard Planned Parenthood from being defunded by anti-choice Republican riders, but it would also prevent any chance of getting stabilization measures passed for the ACA or working to protect young immigrants in danger of being deported by the Trump administration.

At this point, the nuts and bolts of any Labor-HHS bill for FY18 are still unknown, so HIV advocates are largely stuck reading the tea leaves and appropriations measures put forth back in the fall to try and determine how funding will take shape. AIDS United will keep you up to date on all the latest appropriations developments as they unfold.