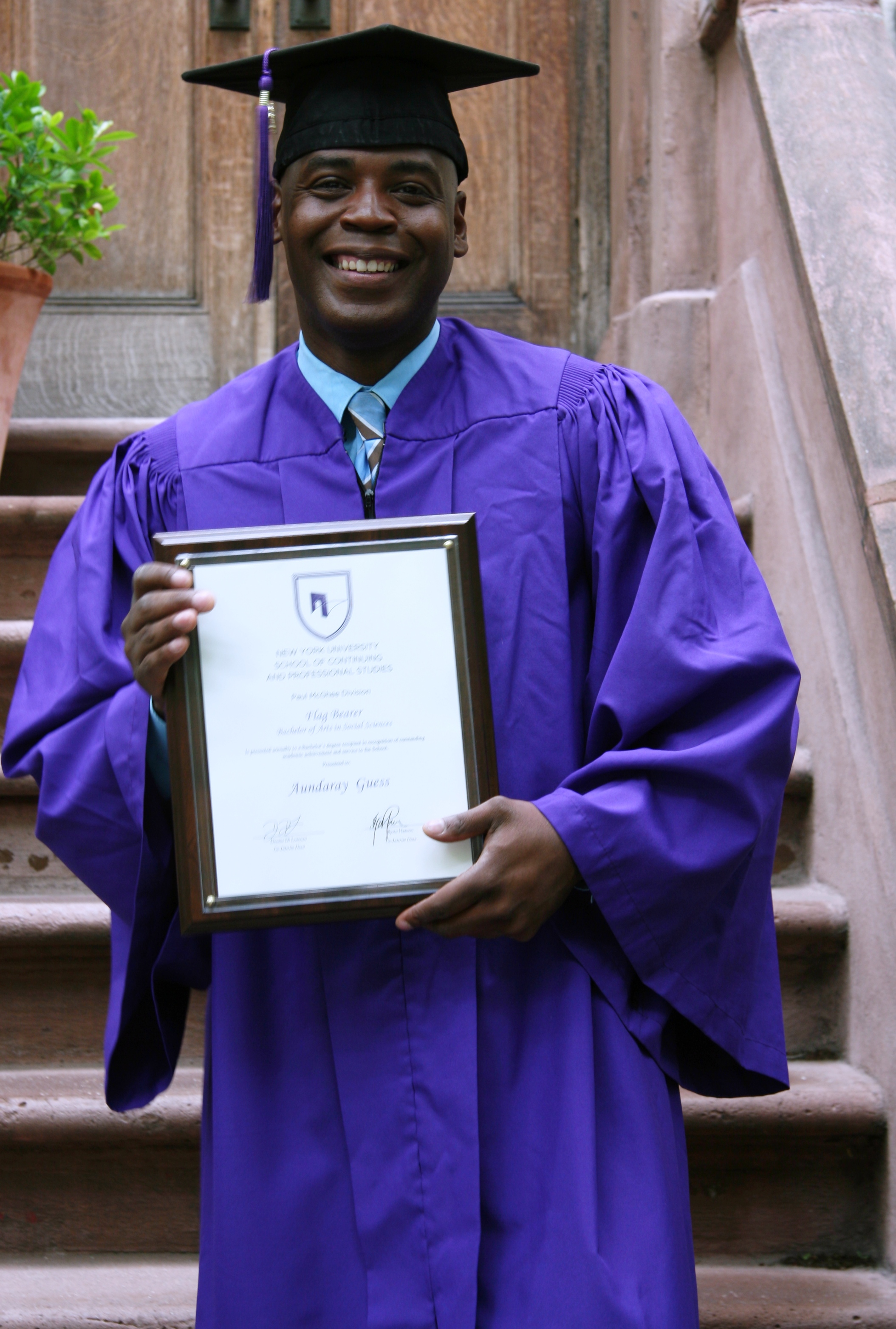 This is what I told myself as I finished my first class in my freshman year at NYU SCPS. It was language that was familiar to me as I had echoed it throughout my life. It started with my first try at college and upon receiving all A’s on my report card hearing my family telling me to not let it go to my head. Needless to say education achievement was not a huge goal in my family system.

To compound my success I was rewarded with another slice of negativity from this so-called life. I was told that I was HIV positive.

It gave birth my to my words of doubt as I felt I was being given an unfair hand at the age of eighteen. I was supposed to have had an open world in front of me with unlimited possibilities but instead found myself looking in the mirror. Staring back at me was a reflection of qualities that I felt was in place for me to fail; I was a gay black man with HIV.

My mother had a feeling that I was gay but was unaware of my status. She even went so far to tell me that if I ever turned out to be gay she would kill me. This coming from the woman who gave birth to me, yet having no pause in letting me know she could take back her gift. She didn’t kill me but she did tell me to get out her house as I must have slipped and in some way let her know about my sexuality.

When you’re sleeping in a rusty Chevy Chevette and the drive shaft is sticking you in the ribs as you’re trying to get comfortable, you’re not in a place where you’re rewinding your life trying to connect the dots of why she did what she did, you’re basically in a survival mode. Yet with empty pockets and a rumbling stomach I sat alone regurgitating the words I knew by memory.

Yet although the light in me was dim it never went out. There was still a spark there despite my circumstances. And I never stopped learning. Although I was not in the ideal place I always had this love of reading. Even at a young age of fifteen I would read the local newspaper everyday and I was a fixture at the library, always having to replace my paper issued library card from over usage.

There was something about me that just liked to learn. I even contemplated going back to college but had convinced myself that with me having HIV what was the point as I would probably be dead before I even graduated. Beside I could just self learn on my own and didn’t need college. But it was a dream denied and being that I was on my own this time I couldn’t blame my mother. It was now I putting the roadblocks in my way.

My changing moment came in the drugstore waiting for my prescription. A stranger to me was also waiting and he was talking about education and I shared how I should have finished college. He asked me why I didn’t and it was a good question as I couldn’t use the excuse of my HIV as it was now twenty years past me learning about my status. But I did try to use my age as an excuse and replied I would be around 44 before I got it. He simply said, “You’re going to be 44 regardless so you might as well be 44 with a degree”.

He was right. In order for me to reclaim my dream despite my status I had to remove the words, “Don’t think’ to ”I can do this’

Fast forward to 2012 in the month of May, as I walk across the stage with honors to receive my degree.  As I turned back to look at my other classmates it takes me back to what got me to this place. I realized that the ability to reach this moment was always within me. It was in me when I found an apartment after a month of being homeless. It was in me when I turned my love of writing into several staged plays, one which received a highly recognized Jerome grant. It was in me when I created a theatre company. It was in me to have a successful career as an actor/model with a national ad. It was in me to live but I first I had to stop focusing on dying.

My graduating doesn’t guarantee me a life on easy street, but it does prove to me that if I set my mind to it I can achieve it. As one of my professors said, “Be in it to win it”. I not only wanted to win but also be enriched by an educational goal that I thought was unattainable. Looking back, although my family never supported my education, they didn’t tell me to drop out. I made that choice.

My diploma symbolizes that when I move out the way of blocking my success, no matter what obstacles I face, I can do it. In the words of the stranger, he was right I was going to turn 44. And despite the fact I’ve been living with HIV for 25 plus years I have something I thought I never had, a degree and an unlimited world waiting for me.