Who could resist guys in white crop-top T-shirts and red Speedos dancing around?

Life has been so stressful lately and I have felt so discouraged to write for so long, that I forgot that writing things down gives me a sense of serenity. I know there has been a lot to celebrate in the last few weeks including the victory for President-elect Joe Biden and Vice President-elect, Kamala Harris. But then the reality of where we still are sets in and it can leave me feeling downright depressed; that being said, I’d like to tell my story of happier times when I was out and about doing things with my life like traveling to Provincetown in 2017 for the first time while living my dream of performing.

I woke up on a Thursday morning in June of 2017 in a new town on the cape. I hadn’t had a chance to explore more than the bike ride to the gym along with a few coffee shops and the grocery store, plus a few 12-Step recovery meetings at 7 a.m. on this particular morning, I started by making my bed, enjoying some coffee, douching and showering, and working out at the gym. I then headed to Rock Hard at the Post Office Cabaret, the venue where we would have our opening night of Male Call. I was sore and ready for a day off but fully aware I wouldn’t have one until the following Monday, so I persisted through a run-through of the show. We felt ready.

After we left dress rehearsal, we all went to eat and rest before we went barking down Commercial Street. Barking is a term for promoting the show. We’d pass out flyers on the street lined with people. Now if you don’t know much about Provincetown, there are two main roads: Commercial and Bradford. Bradford is considered more of the back street while Commercial is the main road with tons of shops, galleries, restaurants, theaters and bars. It is always busy around 6:30 p.m., so three of the four of us would hop into the producer’s 1984 Jeep Renegade named Renée and we’d drive down Commercial Street blasting one of our playlists while passing out as many flyers as we slowly made our way to the Boat Slip Resort where Tea would let out at 7 p.m. 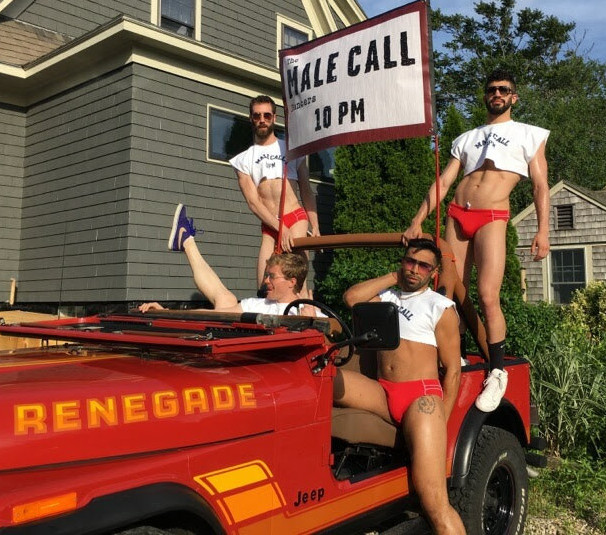 The entire cast on our first night of barking for the show.

Tea is a huge to-do  days a week in Ptown. Hundreds of people would pour out onto the streets from the resorts decks and we’d sell the show to them many times in fifteen seconds or less, hopefully. Who could resist three guys in white, crop-top, cut off sweatshirts and red Speedos dancing around, right? I’m here to tell you a lot more than you’d think. It was still fun. We’d stick around until about 7:15 before heading back to our cottages where I took a nap & prepared for another round of barking in front of the cabaret before the show. I got the hang of this whole thing real quick. 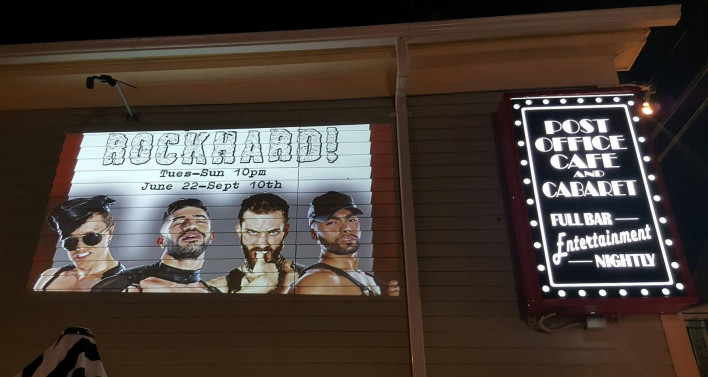 the projection outside of the cabaret entrance.

Before I go on stage, I always get really nervous and feel like I have to pee, so I made sure to use the restroom before going backstage where there were no bathrooms. The entire backstage was basically two small makeup tables with barely enough room for one person on each side, let alone two. We somehow made it work.

While backstage, I heard the preshow music end and the audience cheer. The show music started after the announcements and intro, and then we were on! First entered Micky (Michael) then Apollo (Justin), Boom Boom (Gabe), and lastly me—ManDrake. Our stage names were fun and matched our show archetypes.

I never imagined this was the type of show I wanted to be doing, but it was. My heart was on fire with passion, and my soul was floating in ecstasy from start to finish. That dang full-frontal finale was the one I was most nervous about, but it was incredibly empowering to dance with my dick and ass just out there. It really helped me embrace my body head-to-toe.

Directly following the show, we met with audience members on the back deck with our tip jar for pictures. People wanted to touch our sweating bodies and snap a photo where we encouraged them to follow, like, and tag us on social media.

The opening show gave me a glimpse of what the rest of my summer would be like and I was definitely ready for it. I had waited for so long to feel this alive because I finally recognized what it was like to be happy, joyous, and free… at least in that moment. 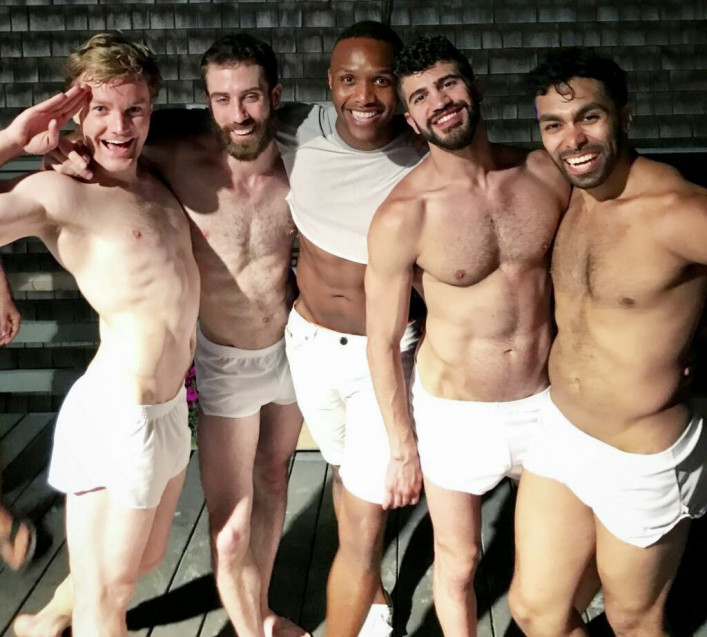 On the back deck after our first show. Micky, Apollo, Shadoe, ManDrake(me), & Boom Boom