For this post I’m going to comment on an issue that is receiving attention at the moment, and if I’m correct will receive a whole lot more in the coming months. This is pre exposure prophylaxis, now called PrEP.

PrEP is an HIV prevention strategy where uninfected people take antiviral drugs before exposure to the virus to prevent becoming infected. Nobody knows if this will work or if it is safe. Several studies have been underway and more are planned to test this intervention for safety and its efficacy in preventing HIV transmission.

It is important to emphasize that PrEP is not meant to replace more traditional prevention interventions, including the use of condoms and clean needles.

A teleconference on PrEP was held last week. It was organized by CHAMP. Their effort to educate and engage the community is admirable. But the flier promoting the teleconference stated that, as trial results were soon expected, planning for how best to use Prep should now begin. Surely this presents an impression that PrEP is both effective and inevitable. This promotional flier failed to make it clear that PrEP is not intended to replace more traditional prevention strategies. The words condom, safe sex or sterile needles were nowhere to be found.

Of course, the idea of preventing an illness by taking some precautionary action is not new. People with less than 200 CD4 cells take Bactrim to prevent Pneumocystis pneumonia; if we visit an area where there is a risk of getting malaria we take drugs to prevent this from happening. At the recent teleconference PrEP to prevent HIV infection was compared to taking drugs to prevent malaria, and even to the use of suntan lotion to prevent sunburn!

I have to say I was taken aback by this absurd comparison. Malaria is curable.

Seriously, some presenters actually placed sunburn in the same category as HIV infection. Maybe this was just a condescending way of explaining what “prophylaxis” means.

PrEP sounds like a great idea. It is. It would be particularly significant for some women (and men) who may be unable to persuade their male partners to use a condom. The drugs that are being studied for PrEP are tenofovir (Viread) with or without emtricitabine (FTC). Truvada is the combination of these two drugs. All are made by Gilead Sciences, although there is a generic version of tenofovir.

PrEP trials have been conducted or are planned in several African, Asian, and S. American countries as well as the US.

Click on this link to take a look at a list of places where PrEP is being studied or where studies are planned: PReP Trials.

Additional information on PrEP trials is available from the CDC by following this link: CDC PReP Information.

I don’t know how many people took part in the teleconference organized by CHAMP last week but there may have been several hundred. Disappointingly, several critical issues concerning efficacy trials of PrEP, and questions about problems encountered in a number of previous PrEP trials remained unaddressed.

What was not mentioned at all in the teleconference was that several PrEP trials in African and Asian countries had been stopped, some by by activists and community groups for a variety of reasons. The reasons include an alleged failure to provide treatment to individuals who became infected, inadequate prevention counselling, and poor laboratory standards. I will add links to fuller information about these and other problems with prior trials a little later in this post.

But not a word about these significant events was heard from the presenters and no questions about them were answered on the call. I did ask for comments on the stopped trials, but received such a totally meaningless response from the moderator that it seemed that he was actually unaware that there had been so many problems with prior PrEP trials.

It is really quite remarkable that a community group did not feel it necessary to tell participants about the concerns of their fellow activists, particularly Act-Up Paris and some Thai groups, regarding PrEP trials.

It’s important to say that the concerns are with the trials, not with the principle of PrEP.

The essential problem of trials of the efficacy of PrEP is an ethical one, and it is inescapable. The best known effective prevention means must be provided when a new prevention strategy is being tested. The most recent revision (2008) of the Helsinki Declaration clearly spells this out in guideline 32. This provision was present in previous revisions as well.

This means that in the case of sexual transmission of HIV, condoms must be provided as well as sustained counselling about their consistent use.  In fact, as recognized by the CDC in the information they provide on PrEP, we have to go the extra mile in prevention education and the use of condoms, to ensure that trial participants do not regard PrEP as a substitute for condoms.  In the case of trials among IV drug users, sterile injecting equipment must be provided. This is clearly unlikely to happen:   it is a point on which Thai protesters have been very articulate in relation to PrEP trials.  I will return to this.


It seems quite clear that if we are to meet generally accepted   ethical requirements in conducting a PrEP trial, we will have to do all we can to ensure that condoms are in the possession of participants and that counselling regarding their use is constantly provided.   It is just not enough to say, as previous PrEP trial investigators have , that condoms are available.

Provision of condoms, if persistent and effective counselling is provided, will probably mean  that there will then not be sufficient seroconversions to be able to measure a protective effect of PrEP.

A protective effect of PrEP - if there indeed is one, will only be seen if condom usage falls below a certain level, which is something we must make every effort to avoid.    This was a point made by the protesters regarding the Cambodian trial which was stopped.  The investigator’s response was entirely inadequate and irrelevant - claiming only that community consultation preceded the trial.

I don’t know what this response has to do with the essential conflict of interest that faces the investigators.  The conflict is this.  On the one hand the investigators must do everything possible to ensure that condoms and counselling are provided. They also have an interest in seeing an effect of PrEP, something that will be less likely if the first requirement is diligently met.

Attention was brought to the stopped Cambodian trial by a rather dramatic demonstration at the International AIDS Conference in Bangkok. 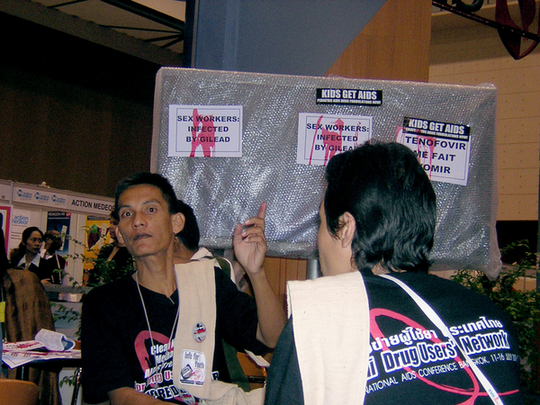 In the case of drug users, if they were provided with sterile injecting equipment it is pretty obvious that no protective effect of PreP could possibly be seen.

The unhappy responses of the investigators to the protesters can be seen in these two links.

The Abandonded Trials of PreExposure Prophylaxis for HIV: What went wrong?

You can see that a past president of the International AIDS Society was quite patronizing and almost contemptuous of the protesters.

Here is an extremely articulate response to the above criticisms:

The Tenofovir pre-exposure prophylaxis trial in Thailand: Researchers should show more openness in their engagement with the community

None of this means that PrEP is a bad idea,    On the contrary it may well prove to be a useful strategy.  But there do seem to be insuperable obstacles to testing its efficacy.

However, safety testing is entirely possible without the ethical burdens presented by efficacy trials. In this case we can provide condoms and constantly encourage their use, and make it absolutely crystal clear that PrEP is no substitute for their use.  If tenofovir or Truvada prove safe there seems to be no reason to withhold it from those individuals who are particularly vulnerable, while of course continuing to advocate for condom use.  Such groups would include women and men who have difficulty in persuading their male partners to use condoms.

Do we expect uninfected people to respond differently to tenofovir regarding adverse effects?  Probably not.   In Cape Town last month troubling evidence was reported that the bone mass of some African men enrolling for a tenofovir PrEP trial was lower than American standards.  Tenofovir is among the drugs that have an adverse effect on bone mass.

Certainly, if condom use by the male partner cannot be relied on, having access to PrEP is absolutely better than doing nothing.   One might ask:  Why not provide people who are particularly vulnerable with  PrEP now?    There is a realistic additional danger.  If a person taking tenofovir as PrEP were to become infected, it is likely that the virus infecting the individual would, if not already resistant to the drug, - most likely would become so.

Still at the end of the day, if the risks were spelled out it seems to me that it is a choice that should be available to individuals at particular risk, of course with appropriate monitoring for toxicity and infection.

I can well imagine that in some situations, some women -  particularly,  but also some men, might decide that an unproven prevention strategy with all the attendant risks is worth pursuing. This should be a choice for the individual.

There is just one more issue to talk about.  Consistent condom use is a proven prevention strategy. Gay men in the 1980s came up with the idea to use them, and were effective in curbing the epidemic’s increase among them at that time.  This was all done without government help and most definitely without armies of behavioral psychologists telling them what to do or not to do. The principle that prevention education and condom use can work is definitely established.

What has not worked so well is perhaps the effort of people entrusted with prevention education.  Indeed every new case is an indication of failure, not of prevention education, but of the lack of it and maybe of the poor quality of the little that exists.

I believe that this is the most important task facing us.  That is a renewed and reinvigorated effort at prevention education.

It is impossible not to note that in at least two areas a technological fix is being looked for.  Of course PrEP is one; the other is the idea that the epidemic could be ended if everybody were tested and all infected people treated.

As always it seems that initiatives that generate profit have a chance of getting off the ground.  Unlike the sale of drugs, there is no money to be made from promoting condom use.

One of the ways suggested to forestall the problems that have beset so many PrEP trials in the past is a greater degree of community involvement early in the process with a view to obtaining  their commitment to the endeavor and minimizing community criticism.

Is this what we are now seeing in the US, as exemplified by the conference organized by CHAMP and others  to come, including one soon to be held by the CDC?

I wonder if the stopped trials of PrEP will be neglected there as well.