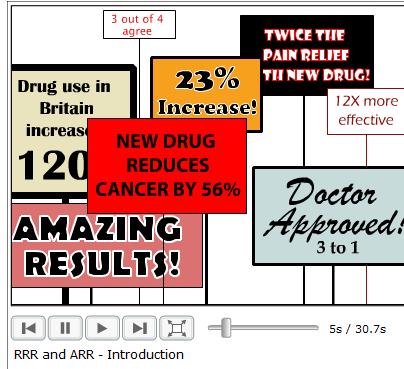 Data on risk reduction derived from trials can be expressed in different ways.  Too often the results of prevention trials are presented in ways that exaggerate the benefits of an intervention, and information is withheld that would allow us to more realistically understand the degree to which risk is reduced.

The most common way in which results are presented in order to throw a more favourable light than is warranted is to only present the reductions in relative risk, and to withhold information on  absolute risk reduction.

In iPrEx for example we were told that the relative risk reduction in people taking Truvada was 44%.

But what does a 44% reduction in relative risk mean?   Certainly not a 56% risk of infection without PrEP, as several people have said when asked this question.   It’s because of these answers that I’m writing this.

Relative risk reduction tells you the percent reduction in risk in the treated group compared to that in the control group, or how much lower the risk with an intervention is relative to the starting risk.

If you are not clearly told what the risk is to begin with, then you can’t tell what the actual reduction of risk is when taking the intervention; all you know is how much lower it is than a number that is not clearly presented to you.

Although it is not clearly stated in the published trial report, we can work out what the starting chance of infection is.

The absolute risk reduction, as opposed to the relative risk reduction conferred by Truvada tells you how much lower the risk is than in the placebo group in absolute terms.

Truvada PrEP reduces the absolute risk of infection by 2.3%.

Yet this lower number is a more accurate measure of the efficacy of Truvada PrEP. (1)

The actual risk of infection in the Truvada arm was 2.8%, which surely is a figure that is more useful to an individual considering PrEP.  (2)

Maybe in Rome, the absolute risk reduction conferred by Truvada was in fact clearly stated.

Knowing the absolute risk reduction allows one to calculate another important measure, which again I did not notice in the trial report.

The cost of the drug is the least of it.  A person taking Truvada needs to be monitored at regular intervals for toxicity and importantly, for infection, in order to prevent the inevitable emergence of resistant viruses as a result of sub optimal treatment.

It should be possible to make a ball park estimate of what it will cost to prevent one infection. Whatever it is, it’s the cost of treating and monitoring 44 people who will derive no benefit and be subjected to the adverse effects of tenofovir on their kidneys as well as other adverse effects. There will be additional costs if they generate resistant virus.

There is a great deal of information written to inform people about the differences between relative and absolute risk and how risk data can be manipulated to make the results appear to be better or worse than they really are.

I would recommend “Know Your Chances” by Steven Woloshin  and others .  The book opens with this statement.

But they don’t have to.

Learn how to make them help you.

Or just put “absolute and relative risk” into the google search box.

I have copied this from a website in the UK addressed to patients:

Helping to decide about taking a treatment

The decision on whether to take a treatment needs to balance various things such as:

To which must be added:

Given that the receptive partner is at greater risk, their best protection is of course to refuse sex with a partner who will not use a condom.  Among men who have sex with men there surely can only be very limited situations when the receptive partner would choose the more dangerous course. For example, in a relationship where the insertive partner cannot maintain an erection with a condom, or where a couple feels that intimacy is diminished with a condom. We should be supportive of PrEP  in these circumstances  We should also make clear what we know about risk, and provide more information than simply relative risk reduction numbers.