14 “indicators” of success show a 30% reduction in AIDS-related deaths but an increase in homelessness among people with HIV.

The National HIV/AIDS Strategy (NHAS) has guided our country’s response to the domestic HIV epidemic since its initial release in July of 2010. Six years later, while substantial progress has been made in several key areas of the strategy, progress in others have stalled, according to a new Indicator Supplement released just last week by the White House’s Office of National AIDS Policy to celebrate the six-year anniversary of the NHAS.

The Indicator Supplement tracks the national progress towards successful implementation of the updated NHAS 2020, by measuring available data against 14 “Indicators” of success. The result? Annual targets for 8 of the 14 indicators were met, with significant progress made in 5 of them. However, 5 of the annual targets were not met, and we appear to be backsliding on 2 indicators.

ONAP, within the report, has provided the following “at-a-glance” infographic summarizing the report: 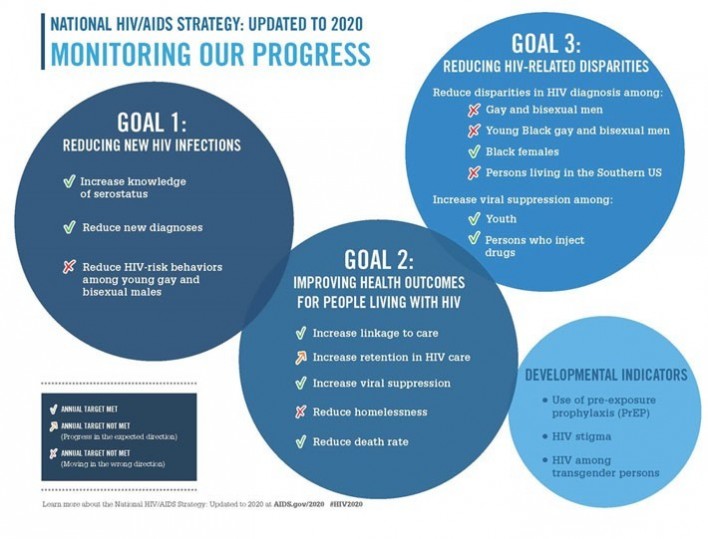 AIDS United is particularly encouraged by the 30% reduction in AIDS related deaths, the reduction in diagnosis disparity among black cisgender women – which actually surpassed the NHAS 2020 target – and the steady improvements in diagnosis, linkage to care, and viral suppression along the entire treatment cascade.

However, we are deeply concerned with the increase in homelessness among people living with HIV – a staggering 9% of those in medical care – especially in the context of a nationally declining rate of homelessness across the country. The unique vulnerability of people living with HIV for housing instability and homelessness demonstrates an increased need for integrated and holistic services as part of our response to the epidemic. It is for this reason that AIDS United fought so strongly for HOPWA Modernization, and continues to fight to guarantee that Congress enacts federal appropriations funding levels which not only shift resources into communities deprived of HOPWA funds under the original formula, but also maintains the funding levels of jurisdictions which may see funds diminish under the new formula.

Equally concerning are increases in HIV risk behavior, as well as diagnosis disparities, among both gay and bisexual men overall and specifically black gay and bisexual men. Additional measures must be taken to address prevention needs, including prevention funding for both Pre-Exposure Prophylaxis (PrEP) and Post-Exposure Prophylaxis (PEP) and funding to reduce community viral load through treatment-as-prevention. Funds must be allocated to halt and reverse these increases in vulnerable communities.

Regional diagnosis disparities – another important indicator from the NHAS – also remain. We are disappointed to see that diagnosis disparities persist for people living in the South since the gains of 2012. Without additional funding, AIDS United fears that the tenuous progress that has been gained in the South could be lost. AIDS United will continue to support Southern communities, whether through the Southern REACH program or other grantmaking and capacity building initiatives, and calls upon the Federal government to live up to the commitments of NHAS.

Since the onset of the epidemic, the HIV/AIDS community has faced seemingly insurmountable challenges, and have met them with strength and grace. We are encouraged by the progress made thus far, bolstered by the bold commitments of the National HIV/AIDS Strategy, and are doubly committed to fighting for the resources and policies needed to meet our commitments to end the epidemic.