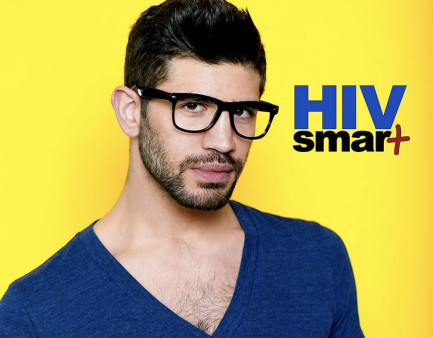 Putting My HIV Status Out There for the First Time

I’d be more vulnerable than ever before. Something told me it was time.

Across from me on the subway a man with a brief case finishes emails while the woman next to him files her nails, and one more seat over is a guy sleeping. Everyone seems headed to the next stop of their journey. I sit here taking in my surroundings and discovering inspiration to write.

I last left you with me finding myself thanks to the unexpected publication of a life-changing question-and-answer exposé about me in The Huffington Post written by my friend “Cookie.” The article taught me that I could be of service just by being me and by being human. I wasn’t super public about my status yet, but I had been inspired to post something on Facebook in late January about being HIV positive. That post along with my HuffPo feature inspired Ryan Colford to reach out to me about being the first person to be interviewed for his HIV Smart campaign to raise awareness and end stigma of the disease.

I remember being nervous to tell my story as I asked the universe for strength and courage to be willing to be open and honest. If I went this public with my status, then everyone would know. I’d be more vulnerable than ever before. Something told me it was time.

Ryan had sent me a list of questions as a guideline of points to touch on. I wrote my truth one word at a time. I laughed, cried and felt a sense of healing and understanding as it came out. Accepting this weakness started to make me feel stronger.

I had only been talked to at this point and never really asked questions or had someone to truly listen to my full story. As I sent my rough draft to Ryan, I felt a sense of relief wash over me.

I had been holding on so tightly to, what felt like, a secret. Through doing the work of getting sober, I learned a slogan that gave me a new viewpoint about secrets and how damaging they can be. That slogan is, “we are only as sick as our secrets.”

Finally, it came time for Ryan to publish the article. Within hours there were hundreds of likes and shares, comments from tons of friends and people randomly reaching out to thank me. It was a door that swung open, and gratitude filled my heart.

I hated my life when it seemed full of stigma and rejection, but now I felt strong and like the whole world could say what they wanted to try to hurt me and as long as one person could relate, I would be just fine. For so long I felt like there was something the matter with me. But telling my story made me feel like a human being. At that point I could only smile—and I felt the unexpected need to do more. My journey was just beginning.

Click here to check out my HIV Smart article