Reagan Statue, Like Prez Himself, Is Silent on AIDS

Last week a 40-foot bronze statue of Ronald Reagan was unveiled in Washington DC. Here’s a speech given by Congressman John Boehner, who cries, yet again. 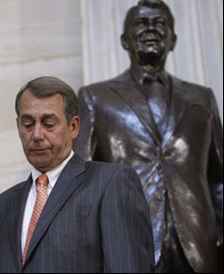 Boehner, like many Republicans, has a soft spot the size of the national debt for Reagan. But for people with AIDS, Reagan is not a symbol of a better time. He’s the chief enabler of an act of domestic terrorism. Harsh? Reality can be. Can you imagine 40,000 people dying today and the president saying nothing? (I’m including W. in this hypothetical, too.) Ten Americans get the sniffles today, and Obama would be on CNN with a box of tissues and a tear in his eye. But then, when Reagan finally spoke, his words were dickish. You can hear them here.

“... let’s be honest with ourselves, AIDS information can not be what some call ’value neutral.’ After all, when it comes to preventing AIDS, don’t medicine and morality teach the same lessons.” Ronald Reagan, April 2, 1987

Maybe I’m missing the point here. Perhaps that statue isn’t the worst idea, because it will provide school children with an excellent lesson on exactly how Reagan dealt with the crisis, which went on to kill millions upon millions more. “Kids, any questions for the president about AIDS?”