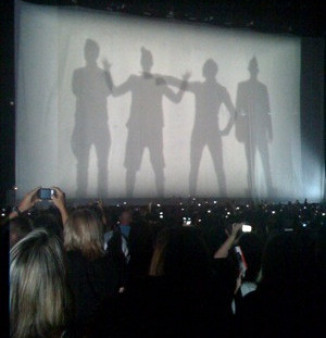 Here’s how No Doubt started their incredible live show.

Quick blog. Here’s a couple of places I’ve been recently. For a birthday gift, my parents bought Gwenn tickets to see her favorite band, No Doubt, who happen to be one of my faves, too.

We got trapped in traffic on the 3-hour car trip to Virginia Beach, mainly because humans hate to drive into tunnels underwater. Gwenn was really frustrated, but we allowed enough time for the over hour delay. I told her that for thousands and thousands of years humans didn’t travel by car, nor were they capable of traveling “underwater” at over the speed of their ability to swim. Not sure if my explanation helped or fanned Gwenn’s flames of frustration.

No Doubt, however, put on a show worthy of the irritation of getting there. So glad they decided to get back on the road together. That was last week, this week we went to see some pro wrestling! Gwenn’s first live event. “The Punjabi Prince” The Great Khali was there, as was Chris Jericho, Edge and Jeff Hardy.

Here’s a shot- no, that’s not me holding the sign. 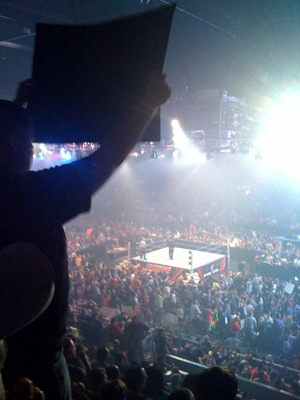 At both shows, I learned moves for an upcoming Synthetic Division show. More in the next blog or two about that, right now I’m off to eat a bowl of cereal and hit the road to speak at a retreat for positoids in the woods. Seriously!  Till then, I hope you are feelin’ hella good.