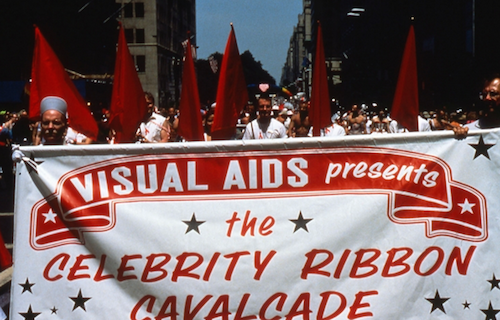 The red ribbon is joining the ranks of the @ symbol, the Creative Commons logo and the Google Maps pin in the Museum of Modern Art’s permanent design collection. MoMA acquired the rainbow flag in June in conjunction with Pride, and continues to serve as the home for an amalgam of cultural milestones. By acquiring the red ribbon, the institution recognizes Visual AIDS’s history and validates the red ribbon’s cultural impact.

In 1988, when there was little public acknowledgement of the AIDS crisis, a group of individuals in the art world founded Visual AIDS to use art in response to the overwhelming silence from national news outlets. As this group grew to include additional artists, activists and cultural workers, they formed the Visual AIDS Artists’ Caucus to begin planning public events to raise awareness about the pandemic and its profound effect on the arts community. During a meeting in 1991, the Visual AIDS Artists’ Caucus was inspired by yellow ribbons tied around trees to honor servicemen of the Gulf War, and suggested using a red ribbon to symbolize support for “the war against AIDS.” The color red was chosen because its references blood, but is also a striking symbol of anger and power. The Visual AIDS Artists’ Caucus would hand-cut, fold and pin these ribbons to their jacket lapels, stick them in pamphlets and distribute hundreds of them to the public. The Red Ribbon made its televised debut at the 1991 Tony Awards. Visual AIDS Director Patrick O’Connell and other members of the Artists’ Caucus had Broadway connections, and when celebrities, including Jeremy Irons, Daisey Eagan and Kevin Spacey arrived with a with a ribbon pinned to their clothing, the popularity of the Red Ribbon exploded. Further information on this history here.

The red ribbon, dubbed “the most powerful icon of the ’90s,” became an international symbol for HIV/AIDS awareness and support for HIV-positive people and their caretakers. Schools and churches were distributing red ribbons. Different AIDS organizations were co-opting the ribbon. The design found its way onto mugs, T-shirts and jewelry. By the end of 1992, it was being criticized as an easy out--a trendy statement which didn’t actually progress the fight against AIDS. Costume designer and Artists’ Caucus member Marc Happel was OK with this, noting that as long as the Red Ribbon continued to spark conversations about the pandemic, it was still relevant to the movement of AIDS activism. And though treatments for HIV/AIDS have progressed in the United States, there are more people living with AIDS today than ever before. Through the red ribbon’s inclusion in the MoMA’s permanent collection, it is gaining institutional recognition of the fact that AIDS is not over. 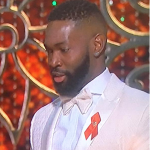