Heart Feldt: A Tribute to David

Gwenn and I are finally home, having swept in and out of “The Little Apple”, Manhattan, Kansas this week, our last talk of World AIDS Week 2008.

We just made it to K-State, too. Wisely we’d taken the first flight out from Richmond, which meant we landed in Kansas City before a snowstorm hit. When we woke up from a very long nap, the ground was white. Drivable for us (the school was two hours away), but enough to cause flight delays. On the way back home the next day, we heard someone saying that a few of the later flights had been cancelled.

But travel turmoil- averted or otherwise- is not what you want to read about. You’re in the holiday spirit, and you’d probably prefer the heart-warming, hot cocoa, warm-fuzzies stuff.

Well, a lot of that happened in the last few weeks. And I’d be remiss if I didn’t give a big shout out to all the places that invited me and Gwenn to speak: Buena Vista University, Southeast Community College in Lincoln, NE, the AIDS Task Force of Great Cleveland, Baldwin-Wallace College (Berea, OH), The University of Toledo and Kansas State University. We can’t thank you enough for letting us share our story, and help educate some folks along the way.

One story I want to share at this moment occurred in Cleveland, over the course of the last two years.

In December of 2006, I shared a story about being recognized by a bookstore manager named Jonathan. “Your book is in my bathroom right now!” He was so happy to see me that he called his partner, David, who was in the hospital recovering from a heart attack.

“We’re like the gay version of you guys,” Jonathan said with a smile. “I’m the negatoid, David’s the positoid.” He so connected with the story, that he ran off to get his cell phone to call David, exclaiming, “You won’t believe who is the bookstore right now!”

My ego and spirit were soaring. The book had just come out, and it was selling modestly. My expectations, given the magnitude of the work of genius, were unrealistically high, and by this point reality was setting in that I wasn’t going to reach my goal of selling 100,000 copies in a year.

After Jonathan’s greeting, I’d forgotten all about my poo-poo attitude about the goal. When I asked to talk to David, my mind raced for something good. Something witty; it’s a lot of pressure being someone’s bathroom read. “David? I heard my book made your heart stop beating.” We laughed, and I gave the phone back to Jonathan and we exchanged hugs before leaving. On the way out, Gwenn said. “See? Your book is reaching people.”

I knew it was, and that moment reminded me of what was important- the real goal before I got stupid about thinking of numbers. My original goal was to tell my story in a way that people enjoyed and could connect with. After meeting Jonathan and David, I never again felt like my book was anything less than a success.

In August of 2007, I was back in Cleveland for a conference called Staying Alive. After I spoke, a guy came up to me and introduced himself as David, the person I’d spoken to from his hospital bed eight months before. We shared a big positoid hug, and I told him to tell Jonathan I said hello. In my heart, I felt really fortunate that our paths had crossed once again, and was happy to see that David was out of the hospital and looking healthy as a horse.

This past August, I got an incredibly sad email from Jonathan. He informed me that in February of this year, David started to have trouble breathing, that complications from an open heart surgery were starting to reveal themselves. David’s t-cell count remained high, and his viral load remained low as it became clearer that the ravages of Ideopathic Pulmonary Fibrosis were going to be tough to overcome.

Even so, Jonathan stated, David’s spirit remained strong as he repeatedly said: “New definition of irony - the AIDS didn’t get me.”

A past president of the AIDS Taskforce of Cleveland, the group immediately honored David Feldt by naming their continuing education program after him. I make a lot out of my horoscope sign being Cancer- a disease- and having the initials “S.T.D.” Maybe David bonded with my story because he was born on April Fool’s Day?

On the day after World AIDS Day this year, Gwenn and I spoke for the AIDS Taskforce that David Feldt once led. We spoke to his best friends, his sister, his colleagues. We spoke to clients of the group and got to catch up with his partner, Jonathan.

When he introduced us, Jonathan shared the story of how, when he met David, it was David who was worried about the complications of dating someone who didn’t have HIV. By the time he got to our meeting in his bookstore- I already had tears in my eyes, the tribute to his partner was beautiful. And I once again felt so very lucky to stumble into that bookstore that day.

During our talk, I was describing one of the more serious aspects of my history with HIV, my AIDS diagnosis in 1999. “I’d lost close to thirty pounds, my t-cells had dropped to below 50...” As I was going on, an ambulance outside the hotel kept getting louder and louder. It sounded like the ambulance was going to burst through the wall, so I stopped speaking for a second. Then promised everyone that this wasn’t an audio trick to ramp up the drama.

Somehow, I believe David was laughing, too. His spirit was in that room, and I felt it the rest of the week as Gwenn and I travelled and spoke about our reality with HIV, and what people need to know to protect themselves.

So now I’m home, making the yearly transition from red ribbons to gaudy holiday sweater vests. As I do so, I am thinking about how honored I am to have had the opportunity to meet David Feldt, ever-so-briefly, on this plain we are all currently inhabiting. 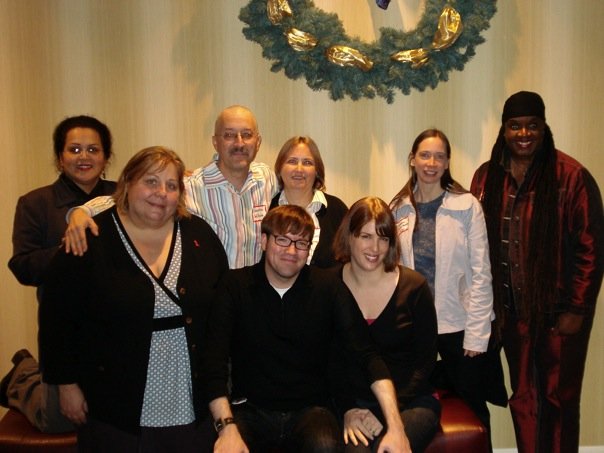 The friends and family of David Feldt. (That’s Jonathan in the white-striped shirt.) 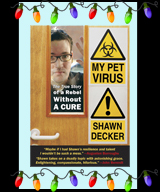 Looking for a Stocking Stuffer?

Nothing says holiday cheer like a humorous memoir about AIDS. Show the ones you love that you care, and get them a copy of My Pet Virus.

Be sure to visit ShawnandGwenn.com to learn about my educational work at colleges and universities.

Haven’t seen a real blog in a day or so? Follow Shawn’s cellphone micro-blogging at Twitter.com.