Twitter
Facebook
Pinterest
Tumblr
Email
Advertisement
I distinctly remember when Kenneth Cole’s “We All Have AIDS” awareness campaign first appeared in 2005. It featured prominent people in the fields of entertainment, politics, culture and science and was designed to illuminate the devastating stigma connected to people living with HIV/AIDS. The tagline was “We All Have AIDS...If One of Us Does.” The message was clear: HIV does not discriminate. Therefore, people should not discriminate against people living with HIV.

I remember thinking how desperately I wished I’d understood that better before I contracted HIV. Because it was the thought that HIV couldn’t happen to me that let me make a decision that left me vulnerable to the virus.

None of us think terrible things will happen to us, until they do. And when they do, when we get hurt, or sick, or are somehow touched by life’s darkness, people (except those who love us unconditionally) often instinctively turn away.

This phenomenon is especially true with HIV/AIDS. The myths, misperception and stigma surrounding the disease cast it in a negative light unlike any other.
For years, I have thought about how to unravel the damaging stigma around HIV. It’s as deadly as the virus itself because it keeps people from wanting to know their HIV status, from seeking medical help and from asking for the love and support all who are sick need and deserve. Love and support that is as critical to getting well as is accessing care and treatment.

Sean Strub, POZ’s founder, has reminded me of U.S. Supreme Court Justice Louis Brandeis’ suggestion that “sunlight is the best disinfectant.” It’s true. And I think it’s especially true for people’s negative attitudes about HIV/AIDS. Time and time again I have seen people make the journey from misunderstanding, fear, cruelty and even hate to a place of understanding, comfort, kindness and compassion when the facts of HIV are exposed, and especially when they get to know someone with HIV.

I thought about this notion recently when participating on a jury to evaluate designs for a new, proposed AIDS Memorial Park in lower Manhattan at a site across from where the mighty St. Vincent’s hospital used to stand. When casting my vote for a design that would serve the mission of the AIDS memorial best--paying appropriate homage to the past while reminding people HIV is still a clear and present danger--I looked for a design that would invite people into the space to remember and learn about HIV, and one that could shed light on a dark thing in order to change the way people see it--for the better.

We saw 475 entries from 26 U.S. states and 32 countries on six continents. It was fascinating to see the vast diversity of interpretations for an AIDS memorial (you can see them all yourself here). And it wasn’t easy to choose. 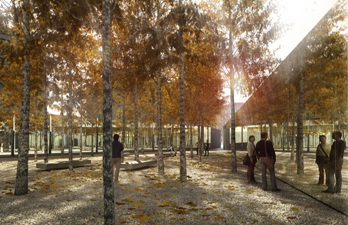 The winning design picked by our jury (led by Michael Arad, designer of the 9/11 Memorial and including Kurt Andersen, novelist and journalist; Kenneth Cole, fashion designer and Chairman, amfAR; Elizabeth Diller, professor of architecture at Princeton University and founding partner of Diller Scofidio + Renfrom; Whoopi Goldberg, actor and comedian; Thelma Golden, director and chief curator of The Studio Museum in Harlem and Amy Sadao, executive director of Visual AIDS, myself and others) does that beautifully. My hope is those who visit the space created by a triangle of mirrored glass filled with a forest of trees will  remember, grieve and celebrate all at once. Hopefully, by causing people to see their own reflection beside those of many others, it will also lead visitors to consider their personal relationship to HIV/AIDS--and to realize that anyone can contract HIV and that we should all know our status and embrace those who have passed from HIV and those who are living with HIV/AIDS. Because, as Cole said, if one of us can have HIV, any of us can.

Two urban planners, Christoper Tepper and Paul Kelterborn founded The AIDS Memorial Park Coalition in 2011. The coalition aims to “recognize and preserve the ongoing history of the AIDS crisis through the creation of a memorial park to honor New York City’s 100,000+ men, women and children who have died of AIDS and to commemorate and celebrate the efforts of the caregivers and activists who responded heroically to the crisis.”

I was so touched when they shared their vision for this memorial with the journey. They explained that too many people in their generation were not aware of either AIDS history, or the impact the virus is currently having on people their age.

The proposed location of the AIDS Memorial Park is an approximately 17,000 square-foot triangle of land bordered by Seventh Avenue, 12th St. and Greenwich Avenue in New York City’s West Village. The property sits across the street from the former St. Vincent’s--ground zero for the AIDS epidemic in America. Following St. Vincent’s bankruptcy in April of 2010, Rudin Management Company acquired the entire medical campus and plans to turn the property into luxury residences including new public open space at the triangle-shaped site.

According to the AMP Coalition, “the redevelopment received unanimous approval by the New York City Planning Commission at a meeting in January 23, with strong support from the Chair of the New York City Planning Commission & Director of the Department of City Planning Amanda Burden and others for an AIDS memorial within the park. The AIDS memorial has received broad-based support from AIDS advocacy groups across the city, historic preservation groups and local community and political leaders including Community Board #2 Chair Hoylman. New York City’s City Council will vote on the redevelopment for the site in late February or early March.”

I sincerely hope the city sees the value of this memorial. Given that NYC has lost so many, and the world has lost more than 25 million people to HIV/AIDS and another 34 million are living with the virus, it’s high time HIV sat squarely back on the radar screen of public awareness. AIDS is far from over and we will not end it unless we remember the grave price we pay--and have paid--for reacting too slowly and in a way that failed to entirely break through the thick layer of stigma.

Today in America, there are an estimated 1.2 million people living with HIV. One in five of them doesn’t know it and more than 900,000 people are not on medication for HIV. Medication that can keep them healthy and also lower the risk of transmission of the virus by 96 percent if they take the medication correctly. The main reason for this? Stigma.

I really hope the wonderful vision for the NYC AIDS Memorial is realized and when it is, all who pass into the bright, light, reflective space will see HIV/AIDS and those living with it in a whole new way. And perhaps see themselves as connected to a disease that once they shied away from facing.

Click here for more information about the proposed AIDS Memorial Park (there is also a complete list of jurors) and to see all the designs. Join up on Facebook at facebook.com/AIDSMemorialPark and on Twitter at twitter.com/AIDSMemPark. 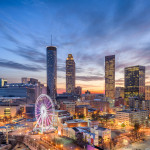