She was also one of the first doctors in New York City to care for people who had AIDS.

I recently received the incredibly sad news that Joyce Wallace died. She was one of the first doctors in New York to care for people with AIDS. She will always be remembered for her compassion and kindness and courage in pursuing sometimes unpopular causes, particularly her efforts to improve the lives of sex workers, providing them with safe-sex education, condoms, HIV testing among many other services.

I started my practice in New York at the end of 1977 with an office on West 12th street, very close to Joyce’s office, also on West 12th Street. We soon became friends. It was through a patient we shared that both of us became aware that Kaposi’s sarcoma was being reported in gay men. Early in 1981, before AIDS was “officially” recognized, I referred a patient with anemia to Joyce for further investigation. An examination of this man’s stomach revealed the presence of purple lesions which on biopsy proved to be Kaposi’s sarcoma.

Joyce called to inform me of this result. She also told me that she had called the National Cancer Institute in Bethesda to ask for an appropriate referral in NYC as she was completely unfamiliar with the diagnosis of Kaposi’s sarcoma. She was referred to Dr. Alvin Friedman Kien, a dermatologist at NYU Medical Center who had already reported the occurrence of Kaposi’s sarcoma in several gay men.

This is how Joyce and I came to know that our patient was one of several gay men with Kaposi’s sarcoma. It was the moment we knew that something extraordinary was occurring.

Joyce was a plucky and determined woman. Her kindness was a quality that stood out, particularly in the New York of the early 1980s when individual ambition seemed to be valued above all else, no matter the cost to others. Despite considerable opposition she fought to improve the lives of female sex workers, recognizing their particular vulnerability during the AIDS epidemic, and towards this end she established the Foundation for Research on Sexually Transmitted Diseases (FROST’D).  She provided safe sex education and HIV testing and distributed condoms to street walking sex workers; some of whom were homeless. Many other services were provided to sex workers by her care-vans that roamed the city.

Joyce was also an enthusiastic participant in the early research efforts undertaken by the AIDS Medical Foundation. She was an author on an important publication appearing in the Lancet in April 1982, less than a year after the “official” recognition of AIDS in June 1981. A graphic of data included in the publication is below: 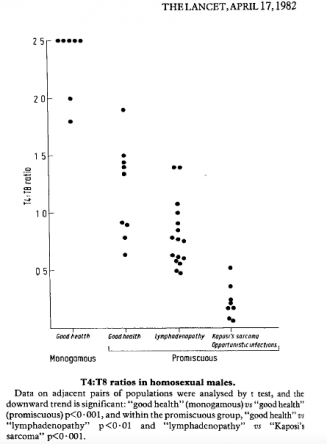 A graphic appearing in The Lancet in April 1982.From “T-Cell Ratios in Homosexuals,” printed in The Lancet, April 17, 1982

This was well before the isolation of HIV, and what was shown was that gay men in New York with multiple different sexual partners had abnormalities in their T lymphocyte subsets. Gay men without a history of multiple sexual partners, such as those in stable monogamous relationships, showed no immunological abnormality. Of course, unknown to anyone at the time, HIV was circulating widely and so men reporting multiple sexual partners would have been predominantly affected. The publication contained a completely non-judgemental warning which was largely ignored. Instead it was seen by some as a judgemental criticism of recently hard-won sexual freedom.

This is how it ends:

On the basis of these data, it would seem prudent for homosexual men to consider possible effects upon their immunological responses of the frequency and diversity of their sexual partners.

Appearing in April 1982, it was one of the very earliest publications on AIDS.

The full publication can be seen here.

Joyce’s work in championing the needs of female sex workers deserves the greatest respect. These women faced multiple difficulties; for some, including homelessness. On top of this they now had to contend with the risk of HIV infection.

Joyce also helped to push back the unjustified additional stigmatization of female sex workers as spreaders of HIV. In reality, the women, not their clients, carried the greatest risk of acquiring HIV infection[1].

Joyce was a remarkable woman. Compassion and kindness towards marginalized individuals are commendable qualities, but it’s the willingness to act on these feelings that distinguish extraordinary individuals

[1] An earlier blog post describes the inefficiency of female to male HIV transmission in N.America and Europe.