Detail from the 2017 HIV/AIDS progress report

It includes data up to 2015. How can we praise any progress as the Trump Administration aims to derail it?

On the surface, there was nothing terribly unusual or noteworthy about the 2017 National HIV/AIDS Strategy Progress Report that was quietly released to the public last week. Aside from a few passing mentions of the incoming Trump administration and the slightest sliver of trepidation from the study’s authors at the Department of Health and Human Services’ Office of HIV/AIDS and Infectious Disease Policy, there was very little acknowledgement that there had been any significant federal policy changes concerning health care and HIV since their last report in 2016. 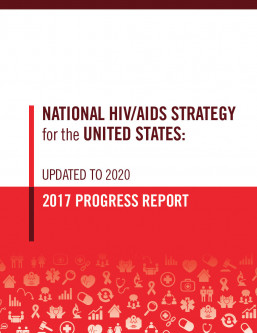 The report was released in May 2018

Nowhere in the Progress Report was there any mention of the Trump administration’s repeated efforts to repeal the Affordable Care Act, which has provided health care access for millions of people living with or at risk of contracting HIV, nor was their discussion of the administration’s radical attempts to undermine the Title X Family Planning Program or their failure to appoint a director of the Office of National AIDS Policy while leaving the Presidential Advisory Council on HIV/AIDS empty. For all intents and purposes, the 2017 NHAS Progress Report was created in a political vacuum, almost entirely separated from the world HIV advocates live in but for a thin strip of hope that maybe, just maybe, the political appointees at HHS and in President Trump’s inner circle will do the right thing and provide the funding and leadership needed to end the HIV epidemic in the United States.

As has been the case in past years, the 2017 NHAS Progress Report uses a set of traditional metrics to gauge success (and failure) in our nation’s domestic response to the HIV epidemic. It is a straightforward assessment of 17 indicators that are used to measure progress on NHAS goals. They measure the growth from the initial NHAS in 2010 through the most recent data we have available. From there, the indicators are extrapolated to see what gains we would need to see between now and 2020 to meet the targets that have been set.

Overall, the most recent batch of progress data (2014/15) on the NHAS indicators is promising, if not necessarily at the place needed to meet the targets set for 2020. Some of the highlights include:

At the same time, there were a number of NHAS indicators that saw significant regression since the last progress report was released. All of the negatively performing indicators were associated with the reduction of risk behaviors and disparities in HIV diagnoses among various populations, including failures to reduce HIV risk behaviors among young men who have sex with men (MSM), homelessness, and disparities in HIV diagnosis among MSMs, young black MSMs, and people living in the South.

Outside of the statistics, the 2017 NHAS Progress Report stressed the need to continue reducing stigma and eliminating discrimination as key to ending the HIV epidemic in the United States and, very much in line with that goal, featured their take on U=U (the “Undetectable = Untransmittable campaign), saying that studies have shown that, “people living with HIV who take HIV medications daily as prescribed and achieve and then maintain an undetectable viral load have effectively no risk of sexually transmitting the virus to an HIV-negative partner.” The Report also called for “full access to comprehensive PrEP services for those whom it is appropriate and desired,” and the need for a robust HIV-centered response to the opioid epidemic.

Unfortunately, due to the draconian budget cuts recommended by the Trump administration in both of their budgets and their aforementioned failures concerning ONAP, PACHA, Title X Family Planning, and our nation’s health care system writ large, the report does not show the full picture, and is sometimes directly at odds with, the actual National HIV response as it is occurring on the ground.

For instance, in the Report’s section detailing the most recent progress on federal actions related to NHAS, there were 26 specific examples provided to illustrate the types of activities taken by federal agencies to address NHAS indicators. Of those 26 examples, 9 of them featured projects that were funded either in whole or in part by programs that would be completely eliminated under the Trump administration’s FY19 budget. Included in this group of praised, yet at-risk activities were the creation of a free online curriculum around HIV/HCV coinfection by the AIDS Education Training Centers’ National Coordinating Resource Center, a 3-year Special Project of National Significance seeking to improve system-level outcomes impacting employment, housing and health care for people of color living with HIV, and a whole host of projects funded by the Secretary’s Minority AIDS Initiative Fund benefitting a wide range of groups from adolescent sexual minority males to American Indians/Alaska Natives.

Alongside their praise of programs underneath the crosshairs of the Office of Management and Budget, the NHAS Progress Report also highlighted recent legal decisions and policies that have been directly contradicted by the actions and statements of the Trump administration. Perhaps most jarring, in the Report’s Reducing Stigma and Eliminating Discrimination section, they spotlight a legal battle that was brought on by an Oklahoma nursing home’s violation of Section 1557 of the Affordable Care Act when it illegally discharged a woman because of her HIV status. The report also fails to note that the Trump Administration has attempted on numerous occasions to dismantle the Affordable Care Act (both through legislative efforts to repeal the law and through ongoing regulatory and administrative sabotage) as well as the health care nondiscrimination policies in Section 1557. No broader context surrounding these events is provided.

It is also worth mentioning that the statistics included in the 2017 NHAS Progress Report do not provide any insight into how the policies of the Trump administration have impacted HIV in the U.S. With the most recent data included in this year’s Report only taking us up to 2014 and 2015, it will be another 2 to 3 years before we are able to see the direct impact that President Trump and this Republican Congress have had on the NHAS indicators. At the same time, AIDS United is pleased that the report remained on schedule and that the indicators continue to be intact. It is not too late to ensure that we stay on track to reduce HIV in the U.S. and even alter course towards a direct plan to end the epidemic.

U=U Is Important for HIV Health, But U.S. Providers Less Consistent in Sharing It