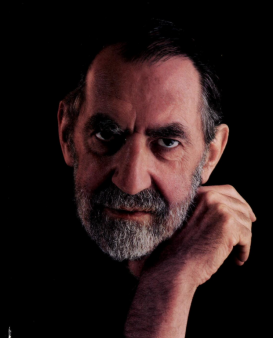 The pioneering AIDS researcher and clinician was 88.

This statement was released to the media by Jay Blotcher. Please call 845-612-9837 or email jblotcher@hvc.rr.com for more information.

Pioneering AIDS researcher and clinician Joseph Sonnabend, 88, died January 24, 2021 at the Wellington Hospital in London, after suffering a heart attack on January 3, 2021.

Born in Johannesburg, South Africa, to a physician mother and university professor father, Joseph Adolph Sonnabend grew up in Bulawayo, in what was then Rhodesia (now Zimbabwe).  He trained in infectious diseases at the University of the Witwatersrand in Johannesburg and the Royal College of Physicians in Edinburgh.

In the 1960s, Sonnabend worked in London under Alick Isaacs, the co-discoverer of interferon, at the National Institute of Medical Research. In the early 1970s, he moved to New York City to continue interferon research as associate professor at the Mt. Sinai School of Medicine.  Sonnabend later served as Director of Continuing Medical Education at the Bureau of VD Control at the New York City Department of Health, where he advocated for a focus on gay men’s health, particularly programs to reduce sexually-transmitted infections.

In 1978, he volunteered at the Gay Men’s Health Project in Sheridan Square, Greenwich Village, and started a private clinic for treating sexually transmitted infections. When gay men in his practice began to get sick, he was among the first clinicians in the U.S. to recognize the emerging AIDS epidemic.

Sonnabend was widely respected as an unusually compassionate clinician and researcher, willing to see any patient regardless of ability to pay, never giving up on a patient and always providing hope. In return, he earned an unusually devoted appreciation and admiration from his patients.

Simon Watney, a writer, activist and close friend of Sonnabend’s, said, “One of Joe’s most important contributions was his belief—that he conveyed to his patients—that AIDS would not be 100% fatal, that no matter how bleak the prognosis, some people would ultimately survive.  That provided powerful hope at a time when hope was in short supply.”

Sean Strub, POZ magazine’s founder and a former patient, wrote in a 1998 profile of Sonnabend, “The environment (in his office) was such that patients in the waiting room sometimes rearranged the order of seeing Joe, based on our collective assessment of who needed to see him first, or who had other doctors’ appointments to get to. Joe’s patients are protective of him. Those of us with insurance remind him to send out bills; those without often helped in his office, cooked him dinner or volunteered with the organizations Joe started. Over the years, his patients have redecorated, filed, cleaned and helped in the management of his practice.”

David Kirschenbaum, an AIDS activist and close friend, said “When thinking of all his accomplishments and contributions to saving lives during the AIDS crisis, one cannot separate Joe the scientist/physician from Joe the man.  His compassion for humanity was the driving force behind all that he was able to achieve in medical research.  This is why he eschewed the spotlight which he so rightly deserves.” 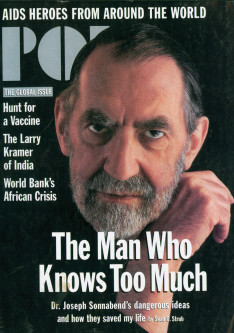 In a POZ magazine interview in 1998, Sonnabend said, “I realize that I was seeing cases of AIDS-related PCP in the late ’70s. But I first encountered the disease a few months before the first New York Times report in July 1981. I had a patient who had parasites and had become anemic. And in order to have him worked up for anemia I referred him to a colleague. She had him admitted to St. Vincent’s Hospital. In the course of working up his anemia, they put a tube down his stomach and saw these purple lesions. The biopsy showed Kaposi’s Sarcoma (KS). Well, neither of us knew much about this rare a cancer, so she called the National Cancer Institute for a referral, and found out that there were 26 or 28 cases of young homosexual men in New York with KS. And this was unbelievable.”

With a background in microbiology, virology, infectious diseases, and experience working with immune-compromised transplant patients, Sonnabend was uniquely qualified to help the scientific community grasp a better understanding this new, pernicious disease.  Working independently of government agencies, which were slow to respond to the epidemic in those early days, Sonnabend conducted some of earliest research into AIDS, often at his own expense.

“The other doctors who were treating AIDS didn’t have the research experience or the instincts or the colleagues. I’m not putting them down. They were just doctors with patients. And the academic researchers—the top immunologists, virologists and so on—who had the expertise, didn’t have the patients. I had both the background and the patients. And that was an amazing discovery. I mean, it was as if I had jewels. I had something so valuable. I had patients who liked me, who were willing to give me blood, who would participate in anything. The one thing I didn’t have was a freezer. I couldn’t afford a freezer, so I kept the blood in a refrigerator that had a little freezing compartment.”

To purchase a freezer and help fund research on his patients—before HIV was discovered or the disease had a name—Sonnabend reached out to a former interferon colleague, Dr. Mathilde Krim, who was also a noted philanthropist and fundraiser.  He asked Krim to help raise $10,000; that collaboration led Sonnabend, Krim, activist Michael Callen and others to found the AIDS Medical Foundation, the first AIDS research group, now known as amfAR, the American Foundation for AIDS Research.

Sonnabend resigned as chair of amfAR’s Scientific Advisory Committee in 1985, protesting what he believed was the organization’s over-hyping, for fundraising purposes, of the threat of heterosexual female to male HIV transmission.

When asked about Sonnabend’s contributions to the epidemic in 1998, Krim said, “What did Sonnabend contribute? He contributed me. He was the one who alerted me to the problem. I remember the day in the early ’80s when Joe came to me and said, ‘I’ve lost my stature as a physician. I have patients with big lymph nodes and high fevers, and they don’t get better. What’s strange is they’re all young, gay men.’ He’s the only doctor I know who goes to every funeral. From the beginning, Joe said the government was wrong to give money to academic clinical research—people who had no contact with the disease.”

Sonnabend also pioneered community-based clinical research, helping to launch the Community Research Initiative (now ACRIA) and other organizations.  In 1983 he founded and until 1986 edited the journal AIDS Research, the first professional peer-reviewed publication focused on the epidemic.  With Michael Callen and Tom Hannan, he co-founded the PWA Health Group, the first “buyers club” for people with AIDS in the world.

From the earliest days of the epidemic, Sonnabend championed the rights of people living with AIDS. He was particularly concerned by the ethical issues around the AIDS crisis, winning the Nellie Westerman Prize for Research in Ethics with his co-authors in 1983 for the article “Confidentiality, Informed Consent and Untoward Social Consequences in Research on a ’New Killer Disease’ (AIDS)” in the journal Clinical Research.  His work inspired the New York State Legislature to pass the first confidentiality protections for people with AIDS.  In 1984, he initiated, with five of his patients and the New York State Attorney General, the first AIDS-related civil rights litigation, suing his landlord for attempting to evict him for treating people with AIDS at his office.

Believing that patients are their own best advocates, Sonnabend encouraged his patients to speak for themselves, not to rely on government officials, LGBT community leaders or others.  When he introduced two of his patients, Michael Callen and Richard Berkowitz, it launched an historic activist collaboration.  With Sonnabend’s groundbreaking scientific guidance and editing, Callen and Berkowitz introduced the concept of “Safer Sex” to a global audience, through their landmark booklet, “How to Have Sex in an Epidemic: One Approach.”

When Sonnabend found the use of Bactrim was effective as prophylaxis against pneumocystis carnii pneumonia, the leading killer of people with AIDS in the 80s, he urged his patients and community activists to advocate with government officials and educate community clinicians to establish Bactrim prophylaxis as a standard of care, saving an untold number of lives.

Sonnabend earned the ire of some gay community activists when he encouraged gay men to change their sexual behaviors to avoid sexually-transmitted diseases, rather than just to have fewer sexual partners, as advocated by Gay Men’s Health Crisis, the leading AIDS service provider in New York at the time.

Prior to the identification of HIV as the cause of AIDS in 1984, Sonnabend’s investigations led him to propose that AIDS among gay men might be caused by multiple factors, including Epstein-Barr virus and repeated exposure to cytomegalovirus and semen. His multi-factorial model conflicted with the view that a single agent was likely responsible, which Sonnabend did not rule out.  After the discovery of HIV, he acknowledged that HIV alone was enough to cause AIDS, but he maintained that repeated assaults on one’s immune system from sexually-transmitted diseases played a role in the progression and severity of HIV infection.

“When AIDS first appeared, having witnessed this incredible surge in STDs in the late ’70s, I felt that the two were connected. Saying that it was caused by some brand-new virus just didn’t seem reasonable to me. I had been trained in a view of health and disease that had gone out of fashion by the time this disease hit. In my day, we were taught to look at disease not simply as something caused by a germ—there are many other factors that affect one’s immunity and the ability to handle infectious diseases.”

Reflecting on his multi-factorial model in 1998, Sonnabend said, “In the beginning, as far as gay men were concerned, I thought this disease was only affecting those with a history of multiple STDs. But now I’ve encountered people who apparently have never had syphilis, hepatitis or anything else—who don’t fit into that model. So that was wrong. The other thing is the role of HIV. It’s not as simple as saying that HIV causes AIDS. It’s rather a view that infection with almost any microorganism doesn’t cause disease in every infected person. It’s not clear that HIV came from monkeys who suddenly started to bite people in the last hundred years. It’s probably been endemic for ages in a small percentage of humans, maybe more or less in different geographic areas. And that a small inoculum may not be followed by seroconversion, but that HIV becomes integrated into DNA, dormant and latent. It may be reactivated, but the immune system may control it and not enough virus is made to seroconvert. After all, many species have their own immunodeficiency retrovirus, which usually doesn’t cause disease. Why should humans be any different? I don’t think we’re dealing with a simple infectious disease.”

In 2000, he was recognized as an inaugural Award of Courage Honoree by amfAR.  In 2005, he retired from his medical practice in New York and moved to London and on World AIDS Day that year, he was awarded a Red Ribbon Leadership Award from the National HIV/AIDS Partnership.  In 2018, at the age of 85, he made his public debut as a composer of classical music, with a concert at London’s Fitzrovia Chapel, part of the AIDS Histories and Cultural Festival.

He was pre-deceased by his sister, Yolanda Sonnabend, the renowned theatre designer and artist.  He is survived by close friends, former colleagues, a number of his patients and two sons.  Funeral details and a memorial event will be announced at a later date.