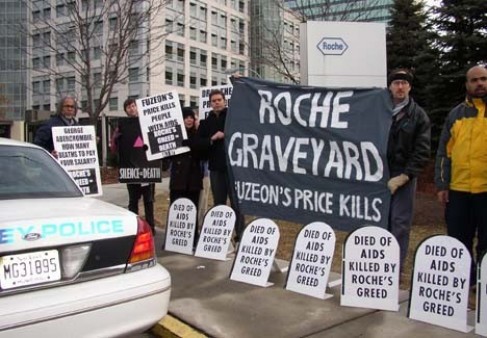 Hoffmann-La Roche, a pharmaceutical company with a checkered history in AIDS drug development, has recently announced that they are ending their efforts against HIV/AIDS. Some activists have pointed to news like this in the past to warn that big pharma is about to abandon AIDS research in droves, because AIDS activists have given them too much grief, or forced them to give their drugs away in Africa, or that there’s just not enough money in it for them anymore. Wrong, wrong, wrong.

HIV/AIDS always has been, and sadly, probably always will be, a profitable business. Pharma isn’t going anywhere. Individual companies have come and gone, but that’s true with any disease area. Over time, the overall pool of companies working in AIDS has actually increased, however slowly. In the late 80’s, it was 2 to 3 companies, then 5 to 7 in the 90’s, and now it averages around 10.

As long as overall antiretroviral sales average over $10 billion a year, industry isn’t going to walk away. And with HIV infections continuing to rise, this is sadly a growth industry.

But back to Roche. They’ve always been one of the weakest links in the chain. They were the third company to bring an antiviral to market, with a me-too drug called ddC (Hivid, 1992), which followed AZT (Retrovir, 1987) and ddI (Videx, 1989). It paled in comparison, and eventually become the first AIDS drug pulled from the market due to lack of sales.

Then came the first protease inhibitor, saquinavir (starting as Invirase, then reformulated as Fortovase, then back to an easier-to-take boosted Invirase - at least they kept trying!), which quickly got out-marketed by stronger and easier-to-take PIs.

When they finally brought a useful AIDS drug to market, it wasn’t even theirs! Fuzeon, the first entry inhibitor, became a crucial salvage therapy over the last five years, offering thousands of people with AIDS their last hope after becoming resistant to first- and second-line therapies. But another company, a small biotech called Trimeris, discovered it. They partnered with Roche to help them market it. Even still, the drug is now faltering as easier-to-take salvage therapies have hit the market.

Roche fumbled the development and marketing of all three of these drugs, working poorly with and infuriating AIDS activists along the way. I was one of hundreds of activists from ACT UP and TAG that completely blocked over a dozen entrances to their Nutley, NJ headquarters in February, 1993, protesting Roche’s refusal to offer ddC on expanded access. Then they tried to abuse the accelerated approval process with saquinavir, causing a huge policy schism among AIDS activists over AIDS drug development and the FDA drug approval process.

Finally, they infuriated activists by pricing Fuzeon at close to $25,000 for a year’s supply, the highest price ever charged for an anti-HIV drug. There were many demonstrations, but the company never budged on the price. We all cheered when Tibotec (Prezista, approved in 2006) and Merck (Isentress, approved in 2007) actually listened to AIDS activists and priced their salvage therapies at levels more typical of other HIV drugs on the market.

Roche got one big thing right. They have been a leader in drug development for hepatitis C, especially for those coinfected with HIV. Since almost a third of people living with HIV in the U.S. are coinfected with HCV, Roche’s commitment in this area has been of huge benefit to our community.

For the record, here’s Roche’s letter to AIDS activists announcing their decision: