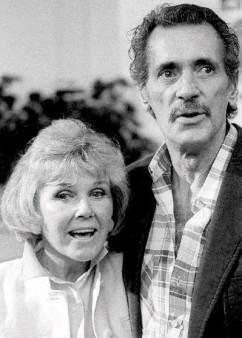 Rock Hudson: The Shot Heard ’Round the World

On July 16th, 1985, Hudson appeared at a press conference on Doris Day’s ranch in Carmel, California, to promote Day’s new TV cable show. The once-virile and muscular actor had not been seen publicly for a number of months, and his gaunt and frail appearance with Day, his former movie co-star, was shocking to the nation. He was a shadow of his former matinee idol self, and his speech was slurred. This appearance became an international news item and was aired on television repeatedly over the next few days. It was rumored that Hudson had AIDS.

This was the “shot heard ’round the world.” It was the absolute moment that changed public awareness of the epidemic.

To the uninitiated: In the 1960s, Rock Hudson and Doris Day were the King and Queen of fluffy romantic comedies: Pillow Talk, Lover Come Back and Send Me No Flowers. In those movies, Day was apple-cheeked, jaunty and forever virginal.  Hudson was virile, square-jawed and a playboy. He had a combative, yet breezy, chemistry on film and, privately, they were friends.

I was working at the time as an AIDS information hotline counselor for the New York City Department of Health. The virus was then called HTLV-III. I was twenty-seven years old.

We worked in a square, state-funded, industrial room with dull, informational posters scotch-taped to the walls, with a corner always curled up or down until someone would smash a palm on the fallen edge so that the poster could stay up for at least one more day.

I remember the sssss of the radiator in the winter and grimy paint-peeling windows we had to lift from the bottom to open.  I remember the smells of pencil shavings and Xerox paper and the ring of the telephones (a loud brrrinngg brrrinngg) and the small square red lights flashing, each one representing a person on ’hold’.

Before July 16th, the phones would ring at an intermittent pace. There were four of us on the shift, answering the push-button phones. We would talk and listen with an ear crooked to the receiver, cradled on shoulder, while the opposite hand grasped a pencil that checked off boxes on a mimeographed form. In the “Reason For Call” category, the majority of the checkmarks ended up in the “Worried Well” box: mosquitoes, swimming pools, casual contact with supposed members of a high risk group, and highly imaginative scenarios depicting every possible “what if” situation.

Two days following his appearance with Doris Day, Hudson was flown to Paris to receive a second treatment of a medication that was being developed there. It was called HPA-23. On July 25th, after first declaring that the actor was suffering from inoperable liver cancer, Hudson’s publicist announced that Hudson had, indeed, been diagnosed with AIDS a year earlier.

But it is his appearance with Doris Day that catapulted AIDS awareness into the American consciousness. It got people talking. And panic set in.

The shock of this revelation was many-fold: AIDS was considered to be a gay disease, and here was the fantasy he-man -- a likable, non-threatening Hollywood action figure, admired by men and lusted after by women, proclaiming that he was gay.

AIDS soon became a visible manifestation of gay men’s “otherness.” With K.S. lesions and severe weight loss, many men were now forced to tell friends and family that not only did they have an infectious disease that would kill them, but they were also leading a secretly gay life.

And now, with his former co-star at his side, Hudson, the square-jawed pal of Ronald Reagan, unwillingly exploded the steel closet door of the AIDS epidemic.

At the press conference, Doris Day showed no sign of fear or pity or sadness. In fact, she glowed with pride as she purposefully gave her co-star a big kiss on the cheek. It was a wonderful and important moment: America’s sweetheart showing the world that, even though there was no mention of the disease, she was not afraid of casual contact with her friend.

From that moment on, the phones never stopped ringing. The Centers for Disease Control established the National AIDS Hotline, and I became its Director. People with AIDS were ostracized, demonized, shamed, blamed and shunned. Our President, Ronald Reagan, did not publicly speak about the epidemic until April, 1987. By then, over 20,000 Americans had died of the disease.

Rock Hudson died nine weeks later, on October 2nd, 1985. For the next ten years, the storm would rage, uncontrollably, despite the occasional and hopeful emergence of possible treatments.