SNL is lazy and lame when it comes to jokes about STIs, so it’s no surprise that homophobia was the center of their Dovato HIV ad roast.

Over the weekend Saturday Night Live had their season debut for 2023, hosted by Aubrey Plaza, star of The White Lotus, Season 2 and Parks and Recreation. During the episode, there was a send-up of the ubiquitous Dovato HIV medication ads. You know them. They play during football games, cooking shows and even run during Christmas movies on a defiantly Christian platform that thinks Hallmark is the moral equivalent of a 1970s Led Zeppelin tour and that over 50 new Christmas movies a year is somehow constitutes a war on Christmas. 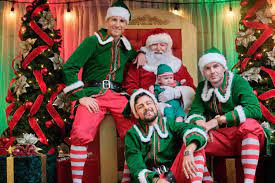 By the way, The Holiday Sitter (starring Jonathan Bennett and George Krissa) was great. It was Hallmark’s first Christmas movie where the main characters who are falling in love with the holiday season as a backdrop are... two men! And don’t get me started on Three Wise Men and a Baby, a masterclass in storytelling (co-written by personal favorites Kimberley Sustad and Paul Campbell) which is basically the Avengers of the Hallmark Christmas Universe, starring Campbell, Andrew Walker and the brooding John Bender of the genre, Tyler Hynes.

But I digress. Let’s get back to the source material of SNL’s skit. No matter where you are, or what you watch, you’ve seen ads for HIV medications. They are so relentless that, right now, I think people are more familiar with the folks living with HIV in those commercials than they are with the current cast members of Saturday Night Live.

Kenan Thompson, of course, is a notable exemption.

I still watch Saturday Night Live. Well, on and off. When it’s good, it’s a fun watch. When it’s not, well, I’m ready. See, I’ve got a Spidey-Sense when a sketch is lookin’ to spin in the mud for five or ten minutes. Like, if a character is a screamer that hasn’t been suitably introduced or written into a funny scenario, I’ll scan them without a second thought. I watch SNL the way Simon Cowell watches contestants on America’s Got Talent, with a “show me somethin’” scowl and a raised eyebrow that doubts I will be entertained sufficiently.

One of the areas in which the writers at SNL are the most consistent, unfortunately, is when it comes to sexually transmitted infections. “I have herpes” or something to that effect is regularly used as a punchline with no set up. So I should have been a little more on guard when the Dovato send-up began…

Foolishly, I thought it would be about how omnipresent the ads are. One of the reasons why they’re doing the sketch is because everyone has seen the source material. The skit is set in a gay club with Aubrey Plaza as the director. A guy in the ad keeps ad-libbing that he’s straight, and Plaza’s character keeps imploring the actor not to ad lib.

But he keeps doing it. To his logic, he’s straight and he’s trying to bring that into his character. Clearly, the joke is he’s a actor taking a gig that he’s not entirely comfortable with. There’s comedy in that concept, clearly, but it wasn’t mined in favor of the hilarity that is homophobia. One of the last of the beleaguered troubadour’s ad libs was: “I got HIV the same way Magic Johnson did, from a basketball.”

Did dumbfucks remember that Magic has HIV or something? We haven’t seen so many not-hot takes on his HIV status since the early 90s. For instance, recently former UFC fighter and current professional blabbermouth and meatwad, Brendan Schaub, recently “joked” about not wanting to be near Magic Johnson, alluding to his HIV status. And here’s a headline on POZ right now: Magic Johnson Did NOT Contract HIV from Hepatitis Vaccine. My point is, the general population is already still tragically beyond stupid when it comes to HIV.

Admittedly, I loved hearing one of the cast members in the skit say that taking his HIV medications helps him keep his viral load undetectable, and I think the constant bombardment of HIV medication ads are doing a good job in educating the general public about U=U.

It’s not going to change anytime soon but I hope, someday, the SNL staff will resist the urge to punch down when it comes to sexually transmitted infections and those of us who are living with them, or loving someone who does.