Twitter
Facebook
Pinterest
Tumblr
Email
Advertisement
Back in November,  I wrote about how President Obama should appoint Poz founder, Sean Strub, as the new White House AIDS Czar because an intelligent and thoughtful positoid in that position would be incredible. 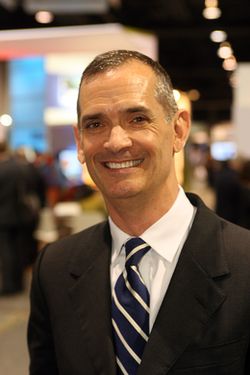 Well, the administration didn’t follow my advice, and Cable Positive has taken advantage and snatched up Sean Strub as their new CEO.  So what is Cable Positive?

They are an organization that keeps HIV/AIDS awareness on the airwaves, and have been doing so since 1992 when many in the cable industry noticed the impact of what AIDS was doing to their colleagues and friends.  Realizing the potential they had to raise awareness via programming and PSAs, Cable Positive sprung into action.  Learn more at their website.

Reducing stigma for those already infected is also a goal for Cable Positive, which makes Sean a natural pick.  When I found out he was being unveiled in DC at the Cable Show ’09 conference, I journeyed to the event.  Heavyhitters such as Larry Flynt strolled by in a gold-plated wheelchair and guys in Storm Trooper costumes told (commanded at gun point?) me to write about the new animated Star Wars show on my Facebook page.

Rumor had it that Batista from the WWE was there, too.

But the real heavyweight was Rachel Maddow, who was emcee’ing the Power Awards at the Cable Positive booth.  Here’s a clip of Rachel at the conference, speaking about how HIV/AIDS has influenced her life, starting at the 3 minute mark.


Yes, I dig the glasses.  No, I didn’t record this myself.

Gwenn and I have been fans of Rachel’s ever since seeing her on Al Franken’s Air America show years ago.  The big thrill, of course, was being there to support the guy who basically started my writing career by giving my Positoid column a greenlight back in 1997.  Meeting Rachel?  That was just an added opportunity to make an ass of myself by fawning over her...

So imagine my shock when- as Sean was introducing us- Rachel said she knew who I was?

“I’ve been reading about your love life for years!”

I wasn’t prepared to be humble.  Not in any way.  And throwing the inner-switch from Fawning Jackass to Humble Writer/Educator was a seven notch swing, but I managed to perform the task with as much grace and poise as I could muster.

“Yer on TV!”  I shouted, all buck-toothed and pointing.  (Okay, that didn’t happen, thankfully.)

As mutual fawning ensued, Sean Strub proudly smiled on as I was once again reminded of just how small the HIV/AIDS universe is.  Not since I slept in Sean Sasser’s pajamas had I been shown such an obvious example of that.  And Rachel’s own involvement in raising awareness about HIV/AIDS isn’t surprising- one of the reasons why I like her work so much is because she is very open-minded and compassionate.