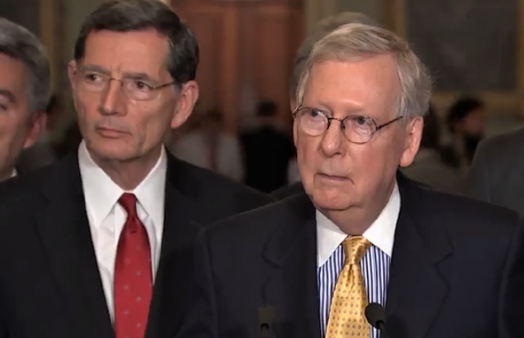 While the nation is glued to James Comey’s testimony, U.S. senators quietly work to undo Obamacare.

On Thursday morning, June 8, the entire American political world revolved around former FBI Director James Comey’s testimony before the Senate Intelligence Committee. All across America—in offices, living rooms, and even bars that opened their doors early to accommodate those who felt like nursing a beer during the morning’s proceedings—all eyes were on Mr. Comey. However, while the media’s attention was laser focused on the Comey hearing, Senate Majority Leader Mitch McConnell and Senate Republicans were working feverishly to push their version of the House-passed American Health Care Act (AHCA) through the Senate.

For the past few weeks, Senate Republicans have been very quietly laying the groundwork for the repeal of the Affordable Care Act (ACA, or Obamacare) and the passage of some version of the AHCA, a health care bill that has been roundly rejected by the American people in all its previous incarnations and would rip health insurance away from up to 23 million Americans. In response to the overwhelming public opposition to the bill and the surging support for the ACA, Sen. McConnell and the rest of the Senate GOP leadership have chosen the road of obfuscation, holding the contents of their revised bill close to their vests in the hopes that they will be able to pass their version of the AHCA under cover of darkness, with no public debate and very little warning.

In this vein, Sen. McConnell invoked Senate Rule 14 on Wednesday, which puts the AHCA on a fast track in the Senate in the hopes of getting a vote before the July 4 recess, bypassing the committee process and all but squashing any chance of open public debate on the bill. Naturally, this has not sat well with health care advocates and Senate Democrats like Sen. Claire McCaskill (D-MO), who castigated her Senate Republican colleagues during a Senate Finance Committee hearing this week for a complete lack of transparency in crafting the AHCA.

“I heard you [HHS Secretary Price], just say we’d love your support…for what? We don’t even know,” an exasperated McCaskill said during the hearing. “We have no idea what’s being proposed.”

We truly do not have any solid idea what is being proposed. At this point in an article like this, it would usually be customary to lay out the details of what will be in the Senate version of the AHCA, but we simply can’t. As of right now, all we have to go on to decipher the contents of this bill are an assortment of rumors, leaks, and brusque remarks from Republican Senators who are determined that the general public know as little about what they’re doing as possible.

With that being said, there are a few things that we think we know about the Senate version of the AHCA. On the contentious issue of Medicaid expansion, it has become increasingly clear that Republican “moderates” in the Senate do not have a problem eliminating federal funding for the program that has provided health insurance to more than 14 million low-income Americans. At this stage, it would seem as if the paramount question among Senate Republicans isn’t if they should end Medicaid expansion, but when. In contrast to the three-year Medicaid expansion exit strategy proposed by Sen. McConnell, The Hill is reporting that Sens. Rob Portman (R-OH) and Shelley Moore Capito are proposing a seven year “phase out” of the program. While not terribly surprising, this move is a clear signal to HIV advocates that we cannot assume that any Republican will fully protect Medicaid expansion.

In addition to the likely decision to eliminate Medicaid expansion, the Senate version of the AHCA will continue to push for wholesale change of Medicaid from an entitlement program where everyone who qualifies for coverage receives it to a per capita cap system where states are allotted a set amount of money each year with which to provide care to low-income and disabled individuals. It also appears as if Senate Republicans are looking to provide states with the ability to waive certain ACA provisions, like those establishing the essential health benefits that plans must cover and enabling insurers to charge older people more for insurance than their younger counterparts. However, it does look like Senate Republicans are leaning toward maintaining the ACA’s insistence that insurers provide coverage to people with pre-existing conditions.

Regardless of the specifics of Senate version of the AHCA, we cannot afford to sit idly by and hope ideological squabbles among Republicans doom the bill. Senate Majority Leader McConnell is deadly serious about getting a revised version of the AHCA on the Senate floor before the July 4 recess, and there’s little reason to believe he cannot get it done. Should it pass, the American Health Care Act would drastically harm people living with HIV, weakening the quality of millions of Americans’ benefits and leading to the loss of coverage and worsening health outcomes. Under the AHCA, people living with HIV only stand to lose. We must not allow this to happen.