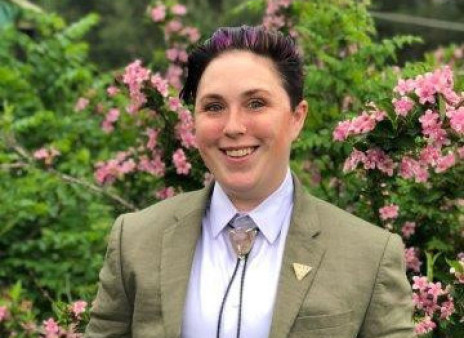 An interview with Christa Daring on the International Day to End Violence Against Sex Workers.

Christa Daring is the executive director of Sex Workers Outreach Project (SWOP)-USA and a founding member of SWOP Baltimore. Daring, who prefers the pronoun they, has been organizing within anarchist, labor, sex worker, anti-war, prison abolition, and queer struggles for the past 16 years since 2002. They are passionate about using popular education and participatory models to build power in historically marginalized and oppressed communities, with the goal of creating inclusive grassroots leadership.

We reached out to Christa and they graciously took time from their busy lead up to International Day to End Violence about Sex Workers to share the history of this day, the current state of sex worker advocacy, and what keeps them motivated in their work.

Tell me a bit about yourself and how you got involved in this work?

I’ve been doing sex work since 2007, and I’ve been a social justice organizer since 2001. I started doing sex work out of financial necessity, but what I thought at the time would be a short-term job has turned into a long-term occupation.

As an organizer, [I started focusing more and more on] sex workers’ rights over the years, and I helped to co-found the Baltimore chapter of SWOP (Sex Workers Outreach Project) in 2015; shortly after I joined the board of directors of SWOP-USA. I was hired as the inaugural Executive Director of SWOP-USA in May of this year. I’m transgender, queer, and basically obsessed with my cats.

How did International Day to End Violence Against Sex Workers come about? Why is this day important?

International Day to End Violence Against Sex Workers, December 17th, was originally observed in 2003 in reaction to the sentencing of Gary Ridgway, “The Green River Killer.” Ridgway was initially convicted of 48 murders, although he has since admitted to murdering 71 women, almost exclusively sex workers. Until this year, Ridgway was considered the most prolific civilian serial killer in the United States, however, tragically last month Samuel Little confessed to killing over 90 women, primarily femme sex workers of color between 1970 and 2005.

Both of these serial killers murdered over the course of many decades, and for the most part these murders were either severely under or never or investigated. In the case of Samuel Little many of his victims were not even ruled homicides, in large part due to the systemic racism and anti-Blackness that pervades law enforcement at the local and federal level. Sex workers are particularly vulnerable to violence because we are targeted as those who are “less likely to be missed,” and because the stigma around sex work encourages the idea that sex workers are disposable.

This year we can confirmed over 50 sex workers throughout the U.S. who have lost their lives; globally we have recorded over 200. Accurate numbers on the death of sex workers are incredibly difficult to determine due to the lack of investigation into missing sex workers and the compounding violences of transphobia, white supremacy, and criminalization. Trans women of color are frequently the targets of violence broadly and that is no different for those doing sex work, on top of which they are often misgendered in death, making it difficult to honor them both for December 17th and Transgender Day of Remembrance [marked every November 20].

This day is so important because we must remember those we have lost, and we must honor those who continue to experience violence that may not be immediately fatal. Sex workers experience disproportionate levels of violence not because of the work that we are doing, but because we are still considered less than. December 17th is a day that we can come together as a community and reaffirm our commitment to each other and creating a more just world, free of criminalization.

We also saw this year the horrific serial killing of sex workers at the border with Mexico by a border patrol agent. Violence by all varieties of law enforcement is common-place for sex workers, either through direct violence of rape or murder or the institutional violence of arrest and incarceration.

On International Day to End Violence Against Sex Workers, what do you want the HIV community to know about sex workers?

The criminalization of sex work, including End Demand (The "Nordic Model”) strategies, harms all of us and makes it harder for already vulnerable populations to access health care, housing and community. Structural racism and transphobia compounded with anti-sex work stigma make it that much more difficult for sex workers to have open and honest conversations about possible HIV risks and exposure. If sex workers are the victims or witnesses to violence there are few if any avenues to that they can access that won’t result in punitive or carceral measures. The criminalization of HIV and sex work are inherently linked and both stem from a system of respectability and violation of bodily autonomy.

Is the movement for sex worker rights connected to the movements for racial justice and transgender rights? Can you speak more on this?

The sex workers rights movement is inseparable from the fight against white supremacy and transphobia. SWOP-USA, like much of our movement, is an advocate for decriminalization, but even if sex work were decriminalized tomorrow that would not stop the criminalization of Black, brown, and trans people throughout the U.S. Efforts like DecrimNow DC are doing the incredibly hard work of intersectional advocacy that could very potentially bring about truly institutional change.

How can people be involved in the movement for sex worker rights? Why is it important that people become allies?

There are over 37 events happening across the United States this year in commemoration of December 17th, and many of these are open to the public. If there is one in your area, please consider participating and getting to know your individual local sex worker community.

Everyone knows someone who is or who has done sex work, whether you know it or not, and our human rights are intricately caught up in so others.

There is so much stigma and misinformation surrounding sex work. What is one misconception or myth about sex work that you want to dispel?

I think one of the most damaging myths is that either sex workers are these middle class sex positive activists or they’re held against their will. The reality is that “the spectrum of coercion” for all labor is so much more complex than that. With few exceptions, we all have to work and we each make daily concessions to put food on the table with the least amount of damage to our dignity. Having sex for money is not inherently more degrading than waiting tables or stocking shelves for many people. We each have to make the best cost-benefit analysis for our own survival within capitalism. Sex workers want rights, not rescue.

How do you stay motivated in your work?

I’m mostly a non-profit bureaucratic who just also happens to be a sex worker and community organizer. I follow @uppittynegress, @thotscholar, @RebelleCunt, @KateDAdamo, @thejessicaraven, @DecrimNowDC and a lot of other really rad women and femmes of color of Twitter, and those folks are really producing a lot of the thought leadership around sex work and intersectionality.

Someone once told me that, “solidarity means taking the same risks”, and as a white sex worker, even one who has experienced my fair share of exploitation in the industry, I’m never going to face the same dangers as so many other sex workers. Continuing to build infrastructure, funding streams, and community dialogue so that the sex workers rights movement can further center and empower the voices, experiences, and analysis of those most impacted by criminalization is what gets me up in the morning. We have to keep pushing to shift power, or else December 17th will remain a day of mourning, one that disproportionately represents our siblings bearing the brunt of white supremacist violence.

Like so much community work, we are trying to raise funds for the end of the year, if you can help support SWOP and our chapters we would be infinitely grateful. We also have pins, totes, tanks, and t-shirts available.