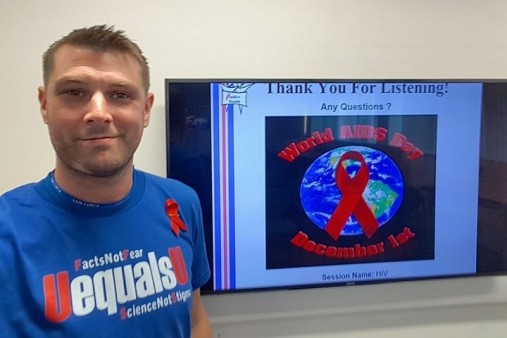 Building Confidence by Teaching U=U to Young People in the U.K.

This is a guest blog in collaboration with RiseUptoHIV by Andrew Gamez-Heath, health educator at Positive Health in Lincolnshire in the UK.

My name is Andrew Gamez-Heath originally from North Yorkshire in the UK but now live in Lincolnshire in the UK. I 3 years ago whilst I was living in London, and at the time I knew nothing about HIV. I thought it was going to kill me. My consultant told me when starting my medication that once I become undetectable, I could not pass the virus on. This statement couldn’t be further from what I thought was going to happen. I didn’t think it was even possible to be uninfectious. It gave me the confidence to continue my life the way I always had. HIV wasn’t going to stop me doing anything. In fact, it frustrated me that the average person doesn’t know this life-changing information.

I went out and applied for a job at a local HIV Charity called Positive Health in Lincoln. We provide social care and support for people with HIV but also go into schools and colleges across the county doing educational workshops on HIV. I love working in a position where I can tell hundreds of kids every week the U=U message.

I feel so privileged to be the one to break down stigma and help educate these students. You can literally see it in their faces as their preconceptions of the virus are blown out of the water.

When I got the job working at Positive Health, the education workshops in the schools was the thing I was most nervous about doing. I had never really done public speaking before but in my heart, I knew that it was so important for students to know the correct information. Now, doing these workshops in schools and colleges is one of my parts of my role. I feel so privileged to be the one to break down stigma and help educate these students. You can literally see it in their faces as their preconceptions of the virus are blown out of the water.

Being able to give students a platform to ask me any question they want and to be to able to spread the U=U message is one of the most satisfying and job-fulfilling things ever. Not only that, being able to tell people about U=U has given me the biggest confidence boost when talking about my own status. I’m not scared to talk about it openly anymore. I want people to ask questions so more people have the correct information.

Prevention Access Campaign’s Undetectable = Untransmittable is a growing global community of HIV advocates, activists, researchers, and over 550 organizations from 70 countries uniting to clarify and disseminate the revolutionary but largely unknown fact that people living with HIV on effective treatment cannot sexually transmit HIV.  U=U was launched in early 2016 by a group of people living with HIV who created a groundbreaking consensus statement with global experts to clear up confusion about the science of U=U. It was the genesis of a movement that is changing the definition of what it means to live with HIV around the world.

“U=U is a simple but hugely important campaign based on a solid foundation of scientific evidence. It has already been successful in influencing public opinion, causing more people with HIV (and their friends and families) to comprehend that they can live long, healthy lives, have children, and never have to worry about passing on their infection to others. The CDC officially backing the science behind the campaign is another key step towards U=U being the most important message of 2017 in the fight against HIV." (The Lancet, November 2017)

U=U is “the campaign credited with beginning to change public perception of HIV transmissibility.” (The Washington Post, December 2017)

Join the revolution! The majority of millions of people with HIV on effective treatment still do not know they cannot transmit HIV, and many do not have access to the treatment and services they need to benefit from it. There are inaccurate information sites and many uninformed policymakers and healthcare workers who are not yet comfortable sharing this information, don’t yet know about or don’t understand the significance of it. Help change that narrative by sharing the groundbreaking news!

For more U=U resources and to learn how to take part, check out www.uequalsu.org