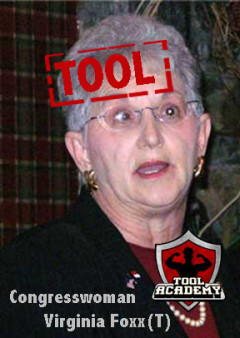 Just when it was starting to look like Shawn’s Tool Academy was an “old boy’s club”, along comes North Carolina congresswoman Virginia Foxx.  Here’s what Crazy-Like-The-Foxx had to say about her vote against hate-crime legislation named after Matthew Sheppard: 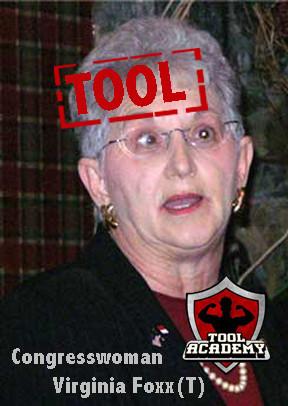 “The Matthew Shepard bill is named after a very unfortunate incident that happened where a young man was killed,” Foxx, a Banner Elk Republican, said. “But we know that that young man was killed in the commitment of a robbery. It wasn’t because he was gay.  The bill was named for him ... but it’s really a hoax that continues to be used as an excuse for passing these bills.”

What’s worse is that Matthew Shepard’s mother was there to hear it.

A hoax is how we allow people like this to get elected.  People who don’t bother to get the facts, who are blinded by paranoia that they are being “swindled”.

Virginia Foxx, you are a tool.  And you’ve broken the glass ceiling in the Tool Academy. This is also the first time a Tool Academy alum’s stupid remarks have been caught on video, which may make Foxx a lock for Tool of the Year honors.