Yes, you read that right- an actor of prominence wore a red ribbon on his suit jacket at the Golden Globe Awards on Sunday night. Before I laud praise, I gotta say that it was wonderful to see one of those little suckers.  Really.  I paused the screen to inspect it, I was so excited.

Back in the 1990s, actors routinely wore red ribbons to award shows to express their solidarity with the plight of those living with HIV.  But once treatments became available to those in privileged areas of the world, the red ribbons started to disappear.  By the end of the 90s the red ribbons had gone the way of the parachute pants, deemed unworthy to enter the new millennium. So big ups to the one and only Steve Buscemi, who continued his tribute to the 90s by losing a Best Actor Award in the TV Series to Kelsey Grammer.

If there’s ever a ribbon made for actors who lose acting awards to Grammer, I’m wearing one in your honor, Steve. 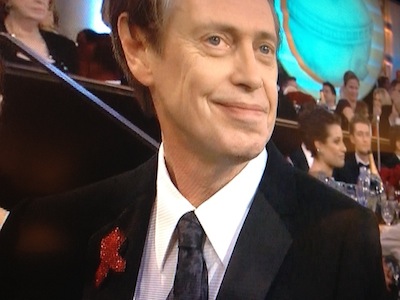