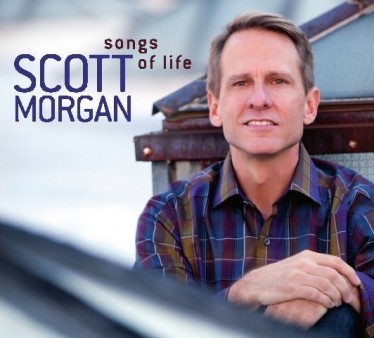 Jazz vocalist Scott Morgan is not your typical debut artist. After all, at age 53, he’s decades older than most of the singers on America’s Top 40. But listening to his gentle and expressive baritone on his first album, Songs of Life, you get the sense that his age, marking as it does a life fully lived, is a point of pride.

After playing music and singing in college, Morgan worked variously in HIV prevention in Tanzania, in a circus as a performer and in the tech industry (he currently works for the Treatment Action Group, an HIV nonprofit) before becoming reengaged in music in in the early 2000s in New York, where he garnered a devoted following via his live performances.

The thoughtfully chosen songs on the album include selections from the Great American Songbook, versions of classics written by the likes of James Taylor, and John Lennon and Paul McCartney, and originals, including a song Morgan wrote with his life partner and onetime POZ 100 cover subject pianist Fred Hersch, whose accompaniment can be heard throughout. (Bassist Matt Aronoff and drummer Ross Pederson round out the rhythm section; guest saxophonist Joel Frahm and vocalist Janis Siegel lend their support as well.)

About his choice of material for the album, Morgan says, “Every song has its own story.” As it happens, HIV is a part of the story of two of the songs, here combined into one: “Little Prayer/Wouldn’t It Be Loverly.” The first half is the work of jazz pianist and composer Dave Catney, who died of complications from AIDS in the 1990s, and which Morgan sings in tribute to a friend he lost to the disease in the 1980s. The second half (a more wistful version of the song by Lerner and Loewe from My Fair Lady) is sung as a tribute to a woman in Tanzania who lost her husband to HIV and was living in a hut. Morgan recalls, “She took me into her house and fed me though she had nothing at all. I thought from her perspective, wouldn’t it be lovely to have heat, chocolate, someone to care about.”

Elsewhere on the album, Morgan’s clear and resonant voice imbues lyrics like “Live the precious day until it’s gone” (from “Song of Life,” cowritten by Hersch) and “No one knows how we got to the top of the hill / But since we’re on our way down we might as well enjoy the ride” (from the James Taylor–penned “Secret of Life”) with an in-the-present-moment assurance that despite the fact that it’s not always smooth, life is, as the song goes, a lovely ride.