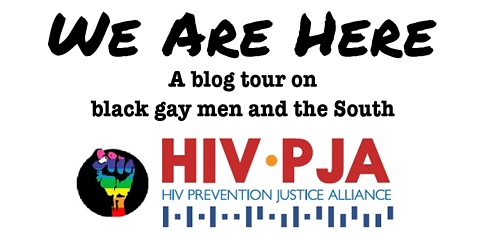 The voices of black gay men in the South are being amplified--thanks to the We Are Here blog tour curated by the Counter Narrative Project and the HIV Prevention Justice Alliance. Beginning on National Gay Men’s HIV/AIDS Awareness Day, a new post is published daily by a different author who addresses another facet of life through the prism of his identity.

Explains Counter Narrative founder Charles Stephens in his inaugural post: “Our charge, not a simple one but an inspired one, [is] to assemble a diverse group of Black gay men’s voices from or in the South, to speak to, provide perspective around, and ultimately bring visibility to our experiences.”

The various bloggers take on topics like HIV criminalization, stigma, condom usage, and aging, writing openly about issues that heavily affect their community. University of Michigan grad student Kenneth M. Pass, considering his history of sex without a condom, writes, “We use condomless sex to survive the realities of being whom and what we are, to reassure ourselves that we are not void of love, eroticism, resilience and intimacy, and to exchange that reassurance with other men like us.” And Robert Suttle, assistant director of The Sero Project (and a POZ blogger), writes movingly about “the profoundly stigmatizing effect of HIV criminalization” and his own experience being convicted under Louisiana’s “Intentional exposure to AIDS virus” statute.

According to the Centers of Disease Control and Prevention, black men who have sex with men (MSM) represent the second-highest rate of new HIV infections, and cases in the South have increased by 13.7 percent.

Follow the blog tour each weekday to read these unique stories from voices not often heard in the mainstream. Find out more about the Counter Narrative Project here and the HIV Prevention Justice Alliance here.