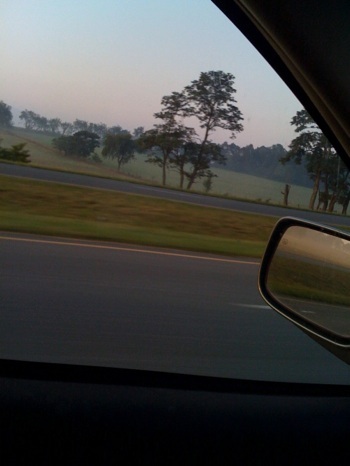 On Wednesday morning, I drove over the mountain... My destination?  Stuarts Draft High School, which is just four miles down the road from the last house I lived in during my Waynesboro Days. (Ages 5 to 23, respectively)

An old friend, Allison Jones Sprouse, teaches English at Stuarts Draft High.  Her colleague and friend, CJ, teaches a class on Leadership, and they both thought it would be a good idea to have me tell my story about overcoming obstacles in my own life.  Also, at the risk of flirting with arrogance, I guess I’m a local boy done good.

Allison and I became friends way back, when she was 16 and agreed to drive me and my best friend over the mountain to the big city of Charlottesville, the place I now call home.  Those ventures were like a sneak peek into the independence that only a set of wheels can provide.  How could I not repay that kindest of favors when she asked if I’d be willing to speak at her school?  Plus, I managed to squeeze a Decker’s Daily iced mocha sponsorship out of her, too. 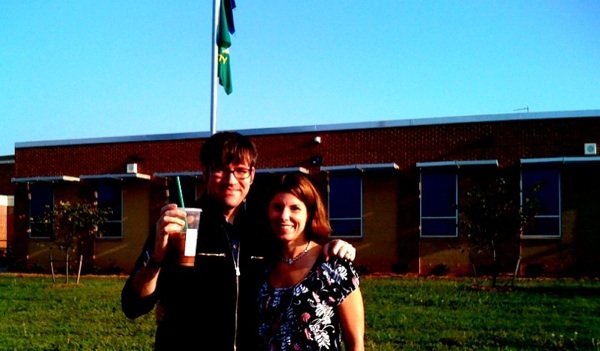 I love speaking at high schools.  Sometimes it’s tough to get in because of the issue, and the schools that do want me and Gwenn tend to be on the other side of the country with no means to fly us in.  This?  This was easy- 30 miles over the mountain... the only hitch was that the class started at 7:30 am.  And I keep vampire hours.

Would I suck because of my Nosferatu sleeping habits?

I was as lively as I could be, focusing on my junior high and high school experiences right after my diagnosis.  I talked about my first girlfriend, Kelly, in junior high school, who was told by a classmate that I had AIDS.  It was a big part of My Pet Virus, because that was the first time I had to deal with HIV infringing upon my love life.  When confronted I lied to Kelly, but only because I didn’t want her to be upset.  When she found out I was positive- and was okay with that- I broke up with her.

Because I couldn’t deal with her knowing my secret.

I explained to the students how I went from the boyfriend who kept his status secret to an educator.  How learning along the way helped me get a point where I was ready to deal with HIV head on.  I threw in my own feelings on the concept of leadership along the way- that sometimes we are too busy looking to others to lead the way, when we are the ones who have to get off of our asses and make a difference.  And how one shouldn’t shy away from surprising ones self with feats that were previously considered unimaginable.  For me, that was my decision to disclose my status at age 20.

The best decision of my life.

Afterward, CJ and Allison were thrilled and several students thanked me.  One guy put it this way: “This is the first time I actually liked a speaker and didn’t fall asleep.”  That was good to hear, since I took a bit of a risk by ending the talk with, “Alright- that’s it!  Sorry, but I’m taking my iced mocha, and I’m gonna drive back home and get back in bed.”

I got great feedback on Facebook, but one message in particular took me by surprise.  It was from a parent.  She told me her son really enjoyed the talk... but, he couldn’t believe one aspect of the story.  See, the parent was from Kelly- my junior high sweetheart!  We’d been in contact on Facebook after My Pet Virus came out.  She was cool about me using her junior high school heartbreak (even with HIV I was a major catch, you see) for educational purposes, and she said her son couldn’t believe that she was “the girl” in that story!

Really, the hero in that story.  Her reaction to my status was the first glimpse I had that maybe, just maybe, my virus wouldn’t cause someone to run for the hills like the girl in the Thriller video when ol’ Jacko finally got the courage to confess he wasn’t like the other guys.  It took a while to figure that out, but eventually I did.

I’m so happy that my own ideas about how to live with HIV morphed just as dramatically, albeit over a longer period of time.  I’m thankful beyond words that I survived those early years of doubt, when I couldn’t even say the word “AIDS” because it meant nothing more than doom... when I got confidence that I could physically survive, then it became important to insure a peaceful co-exist emotionally with an aspect of myself that I’d willfully ignored.

Sometimes, and especially when I am speaking sans Gwenn, I can get lost on just what is the best use of a 45 minute long talk.  Often, it’s the one chance you have to connect with someone on this issue.  Prevention is key, but it is just as important is to let people know that those with HIV are out there and share the same feelings and lives as they do.  I don’t think that prevention talk resonates unless the issue becomes real.  People need to hear that they’ve been around people with HIV plenty of times in their lives.  It sounds simple, but sometimes the solution to a problem is simple.

As for the morning class, well, I can’t complain for having to get up early to go speak about HIV at a high school.  Mainly because, back when I was in high school, I slept in many of days, skipping school by using HIV as an excuse.

Karmic justice has never been so rewarding. 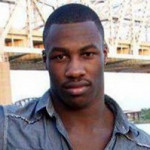 How Is Michael Johnson Adjusting to Life on the Outside?