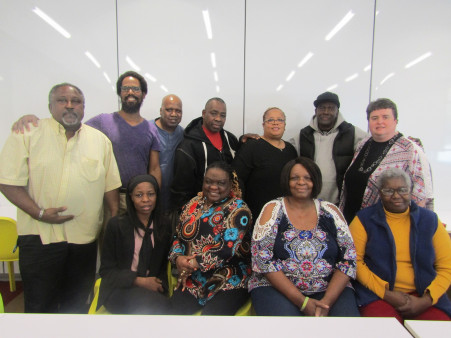 March 27, 2019: In 2015, Pat Kelly, founding member of Positive Women’s Network, held a discussion with the regional chapter of South Carolina about efforts to repeal or modernize HIV criminalization laws in other states in the U.S. That conversation prompted fierce advocacy and funding efforts to create the “South Carolina Dream Team.”

PWN SC is in its third year of funding through the AIDS United People Organizing Positively (POP) grant for their work toward modernizing their state’s HIV criminalization laws.

PWN interviewed Bonetta Spratley (PWN SC co-chair) and Stacy Jennings (former PWN-SC co-chair) about their work building this coalition, the highlights and challenges, and what they’re working to achieve.

Q. Tell us a little about what the chapter has been working on in South Carolina. How did you get started? What have you accomplished thus far?

We have been successful in developing a network of 14 new Black trainers living with HIV throughout the state who are well-versed in HIV criminalization laws and strategies to change them. We established a women’s working group at the SC Department of Health and Environmental Control (DHEC) and have rewritten DHEC’s HIV 101 training to include people-first language. We have built a broad base of support from non-traditional partners poised to signed on in support of modernizing HIV criminalization laws in addition to a range of HIV organizations.

We also developed a curriculum for a Training of Trainers (TOT) to outline a vision for the coalition, educate trainers on the Denver Principles, South Carolina HIV laws, and prosecutions that have taken place using a human rights framework for community mobilization and coalition building. We held a 3-day training in 2017 and 2018 open to people living with HIV. Through delivering these trainings and workshops, we built our base of SC HIV Criminalization Ambassadors (SCHCA) and advocates who host 8-hour trainings for other people living with HIV and  a 2-hour workshop for organizations.

Q. You’ve been building a coalition there which includes non-HIV groups: Who is part of it? How have you recruited organizations and individuals to join the coalition? What have been the biggest challenges and successes so far?

A. Our coalition includes champions such as the Women’s Rights Empowerment Network (WREN), a grassroots organization of women across the state who come together on many issues women face such as economic injustice, attacks on reproductive rights, and health rights violations to name a few. Representative Gilda Cobb Hunter is another champion. We wrote letters or met in person to invite these groups and individuals to join our coalition after informing them about our efforts to modernize South Carolina’s HIV criminalization laws. Our biggest challenge is getting everyone together for the meetings outside of calls and zoom, as South Carolina is a rural state. But we keep everybody in the loop through the meeting minutes.