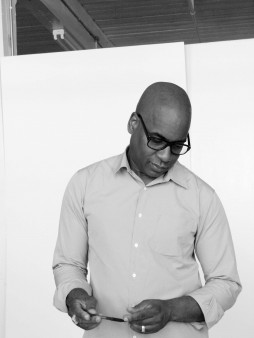 The 11th annual Visual AIDS Vanguard Awards (VAVA Voom) recognize the contributions of individuals who, through their work, talent and dedication, strengthen our communities and reinforce the mission of Visual AIDS. This year Visual AIDS is proud to honor Gregg Bordowitz, Glenn Ligon and Jessica Whitbread.

Visual AIDS: How did you and Glenn first meet, and how has your creative friendship developed over time?

Stephen Andrews: “Runaways” was my first encounter with Glenn’s work, in 1993, so really I met the work before I met the man. I suggested to Wayne Baerwaldt to check out his show and likewise he was blown away. As a result, Wayne ended up curating us both into a show the following year at the Museum of Modern Art in Sao Paulo. The night Glenn arrived in Brazil he was unable to check into his room right away due to ”extenuating circumstances." We met in the hotel bar over caipirinhas. I don’t know if you have ever had one of them but they are like a truth serum. At that time, we were all experiencing such tremendous grief from the loss of so many friends that I felt blessed that I had found a new one in Glenn. We were there for a number of weeks and the hijinks that ensued were really the crucible in which the friendship was forged. Work and play are always collapsed together for me so the fun was always very serious. Very little went unnoticed or commented on. Glenn’s take on the world is very generous but he can be very observant. When talking about work together you will always get a very considered but unvarnished truth, something I cherish. He can be his own harshest critic. As we live in different cities, a lot of our studio visits tend to take place over the phone and are illustrated with messaged photos. It is how we keep up with what is on the slab in the lab.

VA: Can you describe Glenn’s studio and what you know of his artistic process?

SA: Glenn has 3 studios plus a couple of annexes that I know of. The studio upstate strikes me as an incubator. Smaller works and works on paper seem to be the order of the day up there. The Brooklyn studio has a small staff of assistants now. Most of the painting and business is done there. There is also a studio down the hall where Glenn can get away and think. The neon studio is in the same building so all those works are made down there. The screen printing is done in another part of town. Glenn works with the printers very much like with painting. He is very hands on, deciding in the moment where to place the screens on the canvas and where to overlap the printing to create the beautiful moray patterns of some of the recent works. I know there is a great deal of deliberation on the choices of materials and approaches behind the work. He has to see how the ideas are manifested before deciding on the direction to pursue. However, that said, everything seems to come off with the greatest of ease. They never betray the labour of their manufacture.

VA: How do you see Glenn’s work relating to the moment of the 1980s / 90s that it was created in, particularly in relation to HIV/AIDS and activism?

SA: Identity politics and AIDS activism have always marched side by side. The alliance of the two currents in the culture of the time that have helped shape the world we live in today. The struggle is far from over but the gains made are undeniable, despite recent setbacks. Glenn’s grappling with queer and black struggles from that time forward have participated in making visible what the mainstream would rather have ignored. He takes the lessons of the past and re-inscribes them in the evolving contemporary context. Not to sound too socialist but it is only through the solidarity of coalition politics that things get done.

VA: Did you see Glenn’s AMERICA mid-career retrospective, curated by Scott Rothkopf, at the Whitney or any of its traveling venues? What did you think, and what are your favorite artworks by Glenn?

SA: That exhibition was genius! The 20/20 hindsight that a retrospective affords gave us all a great chance to reflect on the scope of his project. It was a history lesson that seemed so fresh though some of it was twenty years on. Probably because some to the lessons have yet to be learned.

For me, his work is one series of favorites followed by another. It is the evolution of his ideas over time and also trying to keep up with the direction they take that I find most exciting. It’s Glenn’s restless inquisitiveness and the rigor of his practice that produces this steady stream of favorites.

SA: Hanging with Glenn’s is a bit like taking a magic carpet on his coattails. Last summer we spent two days bombing around England together. Although they were atypical for me, they struck me as just another day in the life for Glenn. Frankly I don’t know how he does it and gets work done. It requires being on 24/7. In 48 hours we were in 4 cities, starting in Liverpool for an opening at the Tate with the requisite post opening dinner and bacchanal. The following morning found us in Manchester for a cruise through the Whitworth Museum and lunch with the curator and our generous tour guides Ivor and Thomas. After lunch we hopped on a plane. (Ivor sat in the proper part of the plane while we were installed further back). Off we went to Norwich to spend the night in Ivor’s Gastro pub in the restored Gunton Deer Park where all the meals were cooked over a wood fire and you can frolic among the 1000 head of deer while waiting for supper to be prepared.

I found out we were there as a thank you to Glenn as he had written a letter to a judge presiding over Ivor’s travails. Having bought one of Glenn’s Richard Pryor joke paintings, it was hung in the pub with the rest of the collection. Apparently one of the clients of the establishment took offense with the text and brought charges against our host. Glenn’s letter explaining the work of art exonerated the thankful Ivor.

The following morning we decamped for London where we took in a couple of shows before catching a plane to Reykjavik. But that is another story.

VA: Describe Glenn in a sentence.

Stephen Andrews was born in 1956 in Sarnia, Ontario Canada. Over the last thirty years he has exhibited his work in Canada, the U.S., and internationally. He is represented in the collections of the National Gallery of Canada, the Art Gallery of Ontario, the Schwartz Collection, Harvard as well as many private collections. His work deals with memory, identity, technology and their representations in various media including drawing, animation, painting and recently dance.

Glenn Ligon lives and works in New York. He received a Bachelor of Arts from Wesleyan University in 1982, and attended the Whitney Museum Independent Study Program in 1985. A mid-career retrospective of Ligon’s work, Glenn Ligon: America, organized by Scott Rothkopf, opened at the Whitney Museum of American Art in March 2011 and traveled nationally. Ligon has also been the subject of solo museum exhibitions at the Camden Arts Centre in London, the Power Plant in Toronto, the Walker Art Center in Minneapolis, and the Studio Museum in Harlem, among others. He participated in All the World’s Futures at the 56th Venice Biennale (2015), and he curated the group exhibition Glenn Ligon: Encounters and Collisions (2015) with Nottingham Contemporary and Tate Liverpool. His awards and honors include a John Simon Guggenheim Memorial Foundation Fellowship and the Studio Museum’s Joyce Alexander Wein Artist Prize. His work is in the collections of the Tate Modern, London; Centre Pompidou, Paris; Museum of Modern Art, New York; Whitney Museum of American Art, New York; National Gallery of Art, Washington D.C.; Walker Art Center, Minneapolis; Art Institute of Chicago; San Francisco Museum of Modern Art; Los Angeles County Museum of Art, and Hirshhorn Museum and Sculpture Garden.