I have been a lameduck blogger for the past week, and for that I do apologize. I’ve rendered myself culturally irrelevant on many fronts- I haven’t even seen Batman yet.

Lots has been going on, though. Last week, Gwenn and I went to Cleveland to help her Mom (not pictured here) straighten out her home, which she’d not been in for several months due to health issues. Though there were social overtones, our purpose there was like that of a TLC show. Gwenn would go through a drawer and hold up an item, like an opened, empty envelope. 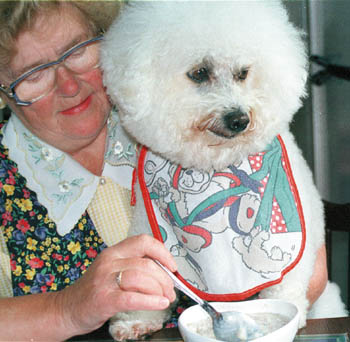 I was on trashbag duty, and stayed above the fray whenever possible, only chiming in for key tie-breaking votes. I sided with Bev, Gwenn’s mom, a couple of times to build her trust and legitimacy as an Independent voice of reason, but when a gnarled stuffed rabbit reappeared from behind the television set, his white cotton guts hanging from a gaping wound to the abdomen, I had to say...

Isobel- not pictured here- was her dearly departed Bison Frise dog. Hazel the replacement dog that now resides with Bev’s sister. As she reminisced about her old pal, a life-size Bison statue was seated by the TV, staring up at me with it’s lifeless eyes, in which I saw an opportunity to send the bunny to its fate at the bottom of my trash bag.

“Look,” I said, giving the Bison statue a little pat on the head while holding the bunny with two soon-to-be-washed fingers. “There’s Isobel right there. This,” I said, dangling the bunny. “Is unsanitary.”

Bev wouldn’t budge on the bunny, embedded with the DNA of two beloved canine friends, but after that victory she was a real trooper for two long days, allowing us to consolidate and organize her home. Each night, under the cover of darkness, Gwenn and I took ten trash bags to nearby townhomes, dumping them in large bins, rubbernecking for ill-tempered residents catching a late-night smoke in the shadows.

This Judas Priest song and video always goes through my mind whenever I find myself stretching the laws of the land.

So that vid didn’t age very well. In terms of music videos, I got an email recently from a guy in town who wants to make a music video for Synthetic Division. “Do I have to be in it?” I asked, haunted by the above images of Rob Halford and realizing the limitations of how cool I could look lip-syncing.

Trips and other things aside, in the last few weeks I have found time to post some Synthetic Division visual treats, just little shout outs to friends. Fans of the Gilmore Girls might be interested in this diatribe, aimed squarely at Lauren Hoffman, my friend and new (!) neighbor.

I’ve got one fan of these vids, and everyone else thinks I’m high in them.

In other news, Bella Morte are back from tour today. As some of you know, Gwenn manages the band, and they actually look really cool and not high at all in their soon-to-be-released video, directed by Eric Thomas Craven.

Here’s a photo from the day they left for tour, posing with Lauren. 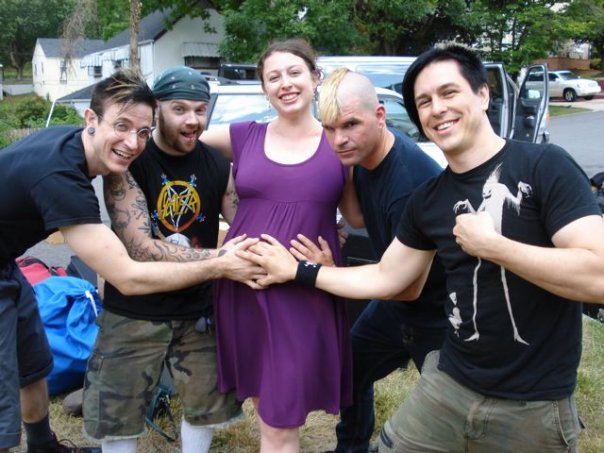 OK, this definitely constitutes as a MEGA-BLOG, and I don’t feel bad for laming out anymore. Hope everyone’s summer is going well!