The Story Behind “Silence = Death”

If you’ve ever attended a gay pride march or AIDS rally, then odds are you’ve encountered—on a T-shirt, a poster, a pin—the image of a pink triangle on a black background with the words “Silence = Death” printed in white beneath it. Created in 1986 for a poster first produced in 1987 by six New York friends seeking a visual shorthand to express their anger at the government’s silence around the AIDS epidemic (and rouse elected officials to do something about it), the graphic was later adopted by ACT UP as one of its main visual references. Today, the instantly recognizable symbol is synonymous with AIDS activism, but many people are unfamiliar with how it came to be.

In an article for The Village Voice, writer Theodore Kerr caught up with the surviving members of the Silence = Death collective, as the men came to be known, and had them tell the iconic symbol’s origin story. Kerr’s interview with Avram Finkelstein, Charles Kreloff, Jorge Socarrás, Brian Howard and Chris Lione (the sixth member, Oliver Johnston, died of AIDS-related complications in 1990) marked the first time the men were interviewed together about the poster and served to promote the yearlong Silence = Death installation commemorating the poster’s 30th anniversary. For the installation, which debuted in early June and graces 20 windows along the facade of the SoHo building that houses the Leslie-Lohman Museum of Gay and Lesbian Art in New York, the words “Be Vigilant. Refuse. Resist” have been added to the original tag line. 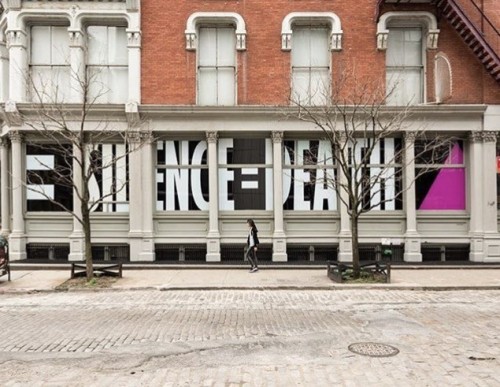 In 1985, stunned by the many friends they had lost to AIDS, the men started gathering informally over dinner to share their grief and to form a consciousness-raising group that might address the epidemic in a way that the powers that be weren’t. After the idea of a poster was floated over a meal at a diner one night, the men—several of whom had backgrounds in graphic design and visual art—got to work.

Because the pink triangle that the Nazis had pinned on homosexuals during the holocaust had already been appropriated by the gay liberation movement of the 1970s, the men decided to start with that, changing the color from a pale pink to the more in-your-face fuchsia seen today and in the process inadvertently flipping it so it pointed up. (In another example of subversion, the collective decided to “own the flip,” as Kerr puts it, further distancing its symbol from the Nazi original’s association with victimhood.) Several iterations of the final words that would accompany the triangle (“Turn anger, fear, grief into action,” “Gay silence is deafening”) were rejected before a consensus was reached. Today, to quote Kerr, “Silence = Death stands alongside We Shall Overcome, Sí Se Puede, We Are the 99%, and #blacklivesmatter as a touchstone of social justice movements.”

Finalized in December 1986, hundreds of posters were wheatpasted alongside corporate advertisements in key neighborhoods in New York affected by AIDS (the West Village, Chelsea and others) starting in February 1987. In an interview with the New York Public Library (NYPL) in 2013, Finkelstein said, “The primary objective of Silence = Death was twofold: to prompt the LGBTQ community to organize politically around AIDS and to imply to anyone outside the community that we already were…. It needed to be advertising.” Thus, the poster helped sell activism in what Finkelstein says was then still an apolitical moment.

Once ACT UP was up and running, the Silence = Death collective surrendered the logo to the activist group because, as Finkelstein said in the NYPL interview, once out in the world, “Silence = Death belonged—and it always will—to those who respond to its call.”

Silence = Death is on display at the Leslie-Lohman Museum of Gay and Lesbian Art in SoHo in New York (26 Wooster Street, at the corner of Grand Street) through 2018. 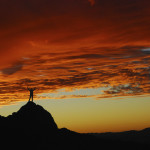