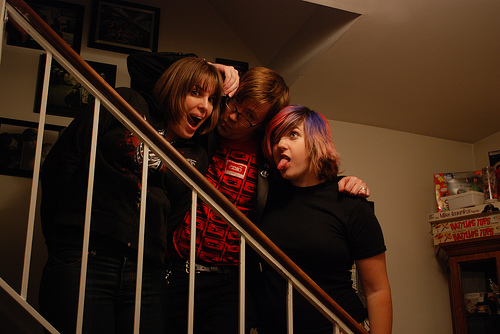 At the beginning of August, I was honored to entertain my secondish-cousin, Holly, who was in Virginia for our family reunion.

Holly is a Red Shirt from Kentucky, I’m from the Navy Blue shirt clan based here in Virginia.

Holly is 17, and traveled all the way for Louisville (“Lua-vuh”, as she says). I was lame and skipped out of the reunion this year, but I was there last year and that’s when I got to know Holly. She rocked out for the dreaded Talent Competition of the family reunion, playing either the clarinet/trumpet/sax.

I’m terrible with wind instruments. (“A trumpet!” Holly has corrected me.)

After the dreaded Talent Competition, which I watched from the sidelines, there was the dreaded Family Reunion Auction. Family members make homemade jams, ovenmitts- you name it we make it. Inevitably, feelings are hurt when hours of work are auctioned off at less than wallet-busting prices.

Last year, one of Holly’s relatives bought My Pet Virus at the discounted rate of $3. A signed copy, no less! This slight only occurred because my Mom wasn’t there to insult the family into putting more bids towards the single greatest professional achievement of my lifetime.

After tipping a tray of nachos, I regained my composure and noticed the trumpet player had my book. I complimented her on her outstanding musical abilities. We exchanged MySpace and email addies, and stayed in touch.

I even sent her a Synthetic Division CD, based on her impressive lists of favorite bands on her site. She liked it, so when I got a last-minute show in Charlottesville that coincided with her trip to Virginia, I invited her to come along.

A talented photographer, Holly brought her camera along to document the show and the fun, which involved her meeting our friends in town and a late-night, post-show trip to iHop. “We don’t have one back home!” Holly said, lighting up at the opportunity. 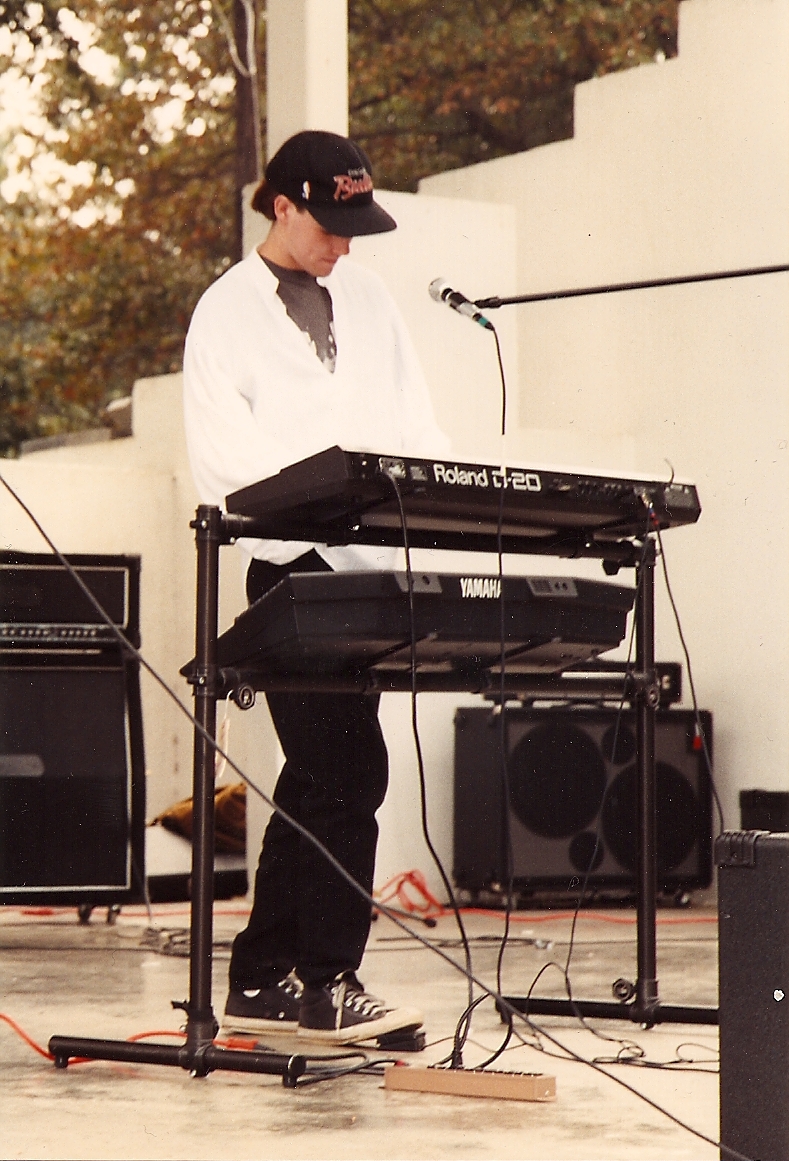 One of the things that bonded me to Holly was the fact that, around her age, I too competed in the dreaded family Talent Competion. It was one of Synthetic Division’s first gigs, taking place at 1 p.m. at Dupont Park in the dead heat of summer in 1992. Armed with a synthesizer, I played an instrumental ditty, backed by layers of preprogrammed drums and synth lines.

The Green shirts, our beloved and most rural branch of the family, didn’t know what hit them.

Aside from the curious sounds, a fair amount of confusion and concern surrounded my fate in ’92. I pinned so many hopes on making it in music, and the hours I spent listening to Depeche Mode and fiddling with my keyboards provided a safe haven from the doomed visions of AIDS, and what it may have held in store. Regardless of shirt color, I believe that most of the family members thought that that moment would be their only opportunity to see Synthetic Division live.

But that had little to do with Synthetic Division staying alive.

Proof of my confidence that I’d be around for a lot longer dates back to that Talent Competition in 1992. Painfully shy about my music, I agreed to give the family a Synthetic Division, but only under the agreement that I’d never have to participate again if the performance didn’t help secure the Trophy.

I played a couple of instrumental songs, and then the rest of the family came and clapped, playing the fools to the delight of no one. And seeing Dad shirtless in a faux-diaper made me realize what a masterstroke my deal was. 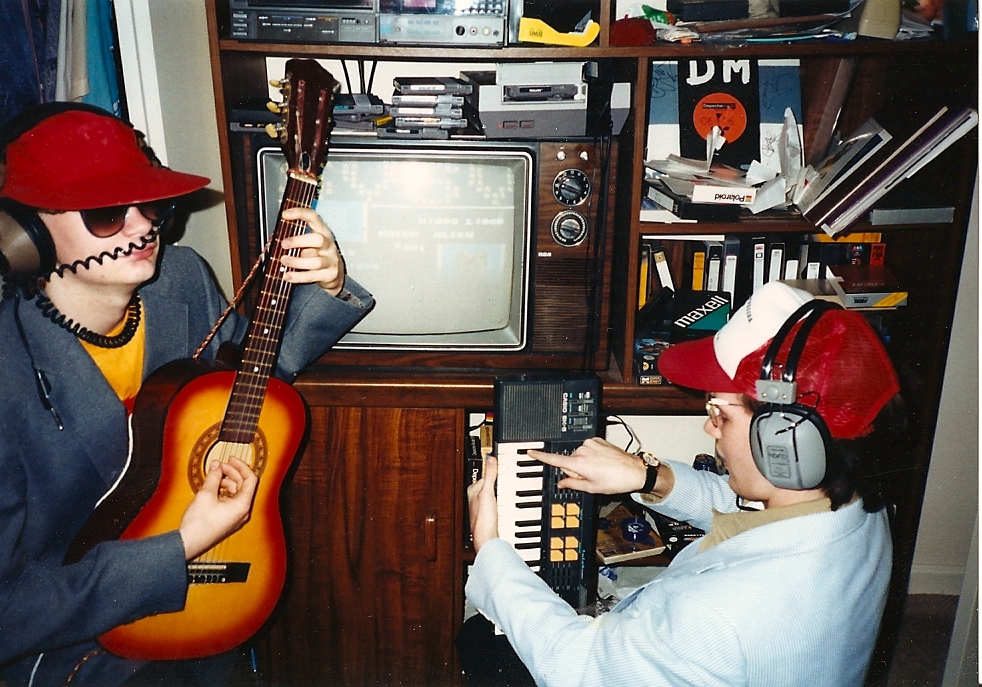 In 1989, Synthetic Division was more about image than actual music. (That’s me on right) 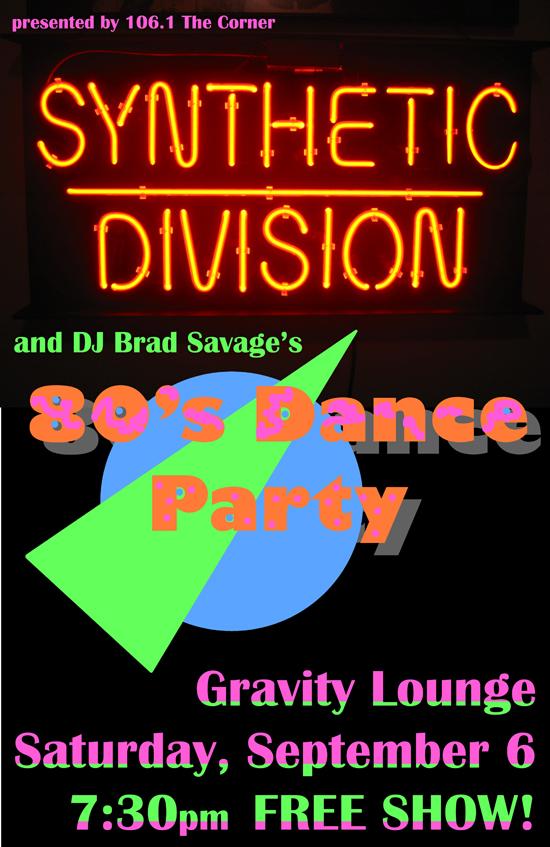 Mom figured that the judging panel would be swayed to reward me for my brave battle with AIDS, and could see the delight in her own mother’s eyes when the trophy came back home to the Navy Blues. What they didn’t figure in is that my music sucked, AIDS or no AIDS. Also, this reunion was a full five years after my diagnosis, and the family was starting to get comfortable with the thought that I’d be around for a while.

“There’s always next year, kid,” as they say.

We lost that year. And I’ve stuck to the terms of the agreement, never participating in Talent outside of judging for the Blues. I like that. And I like the thought that the only time I will attend the family reunion as an adult in diapers won’t be until the year 2060.