Saturday night a synthpop duo played their hearts out in Charlottesville. Then, on Sunday night in Los Angeles, MTV gave all their awards to Britney Spears. What?

No Best Synthpop Duo. No Outstanding Thinblooded Male Vocal. Not even a Video Vanguard Award for this.

Nothing! How many other artists can get up there and tear it up with a bleeding disorder?

Despite the snub to the bleeding disorders community, the weekend could only be considered a success. The rain stopped early in the afternoon on Saturday, and a good amount of people came out to shake their booties even though they saw us last month at the Dawning benefit show. (Cool live shot by Cousin Holly!)

This time, we were at Gravity Lounge, a place that holds fond memories. Gwenn and I had our rehearsal dinner there, and I did a reading at GL last year for the Festival of the Book. But this time? My only purpose at Gravity was to bring the rock. 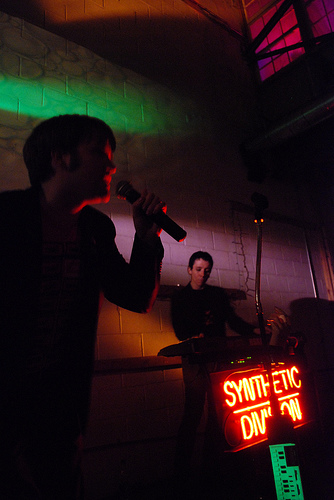 The show was originally to be headlined by Girlfriend in a Coma, but the Smiths cover band broke up a couple of weeks before the gig... just like the original band! Still, the night was salvaged- Brad Savage from The Corner 106.1 spun 80’s and early 90’s tunes in between two Synthetic Division sets... the highlight of the evening? Watching Gwenn dance to Prince’s “Pussy Control”.

The day or so after a gig, I’m always limping around. Sometimes I’ll take a nasal hit of Stimate, a clotting agent, before a show, because I have so much fun on stage hopping around like an idiot with the proper amount of clotting factor. If Synthetic Division ever toured, I’d have to tone the antics down. But, at one gig a month, I think I can handle the fleeting discomfort.

In a long overdue move, on Saturday night Synthetic Division did a Depeche Mode cover, programmed by JDavyd Williams, who works with Marshall in another C’ville dynamic duo, Tacit Act. If you are on Facebook, check out a video of us performing the Depeche classic from 1981, “Photographic”, recorded by Stephanie DePaolis, who ironically has taken lots of photos at Synthetic Division shows... thanks, Steph!

If you’re not on Facebook, I’ll try to get an embed on the next blog.

Hope everyone else had a picture perfect weekend.