The Curious Case of Shawn’s Buttons

So of course, I post a glorious blog last week about getting over my cough and it comes back about a day later.  Figures.  I got cocky and went to a smokey club to have fun with friends and spread the word about this Saturday’s HIV benefit show with my band...

Which will be- of course- a smokey club.

I’m going to check in with my doctor and let him know what’s happening so I’m not assuming this isn’t treatable.  Because it’s been over two weeks now, which is ridiculous evening by my standards of recovery.  Overall, I’m feeling a bit better again, but don’t want to be coughing the night away needlessly if I don’t have to. 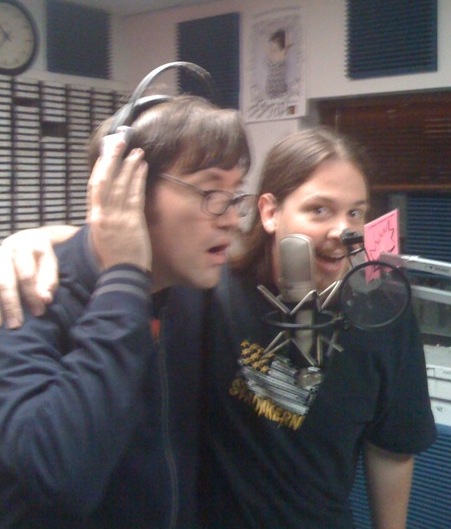 Tonight I had band practice with Synthetic Division- the set is really coming together.  After practice, Marshall the keyman and I lit a firecracker in drummer Mike’s driveway, then went to WNRN’s Subculture Shock radio show to talk about the event this weekend.  That’s me and Silent Muse (who are also playing) band member Chad.  I was pretending to sing “We Are The World”.


One of the best things about being in a band is making buttons.  This time around, my good buddies in Bella Morte donated the button-making facilities (thanks guys!).  I enlisted a graphic designer and one of my best friends, Josh, as well, and he sent along the button art below, which was so good I kind of lost my mind, as you can see.

Josh is a talented musician and played a Synthetic Division set with me last year when Gwenn and I went to Los Angeles. Right now, he’s working on album artwork for Lauren Hoffman’s Interplanetary Traveler, the subject of the last blog entry.  Josh is probably one of my favorite artists on Earth and it’s nice that his artwork, and creative spirit, will be at the show.

As for others who can’t be at the show, but would like to donate to the cause... Well. You can go to me and Gwenn’s official fundraising page here. Also, any Decker’s Daily coffee sponsorships of $5 from now until Saturday will go to benefit total this Saturday as well.