The Fabulous Wizard of POZ

Every month or so, a group of people in my area host “poz socials,” a house party for people living with HIV. I found myself at one recently, because I thought it was important to make an appearance since becoming a literary superstar.

I was settled into the living room sofa and liked the spot very much. Sharing a couch with regular folk has an air of humility about it, while its angle allowed me to be viewed by a large number of the guests milling about. 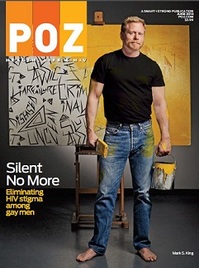 The man next to me leaned in closely to be heard over the hubbub of the party. “Are you on the cover of that magazine...?” he asked, of course.

I should proceed with caution, I thought. If he is a stalker and I engage him haphazardly, he’ll steal my social security number and soon claim we’re Minnisota’s latest newlyweds.

"Well now, what magazine do you mean...?" I said, and then I smiled demurely. It’s best to display warmth when you are recognized in public. But carry mace.

“The magazine you’re holding in your lap...” he said, “with the cover facing me? I saw some copies on a table at the front door, I think. That’s you, right?”

"Oh, this magazine!“ I said, waving it in my hand as if I’d just discovered it, ”yes, well, they’re sending me so many you know, boxes of them, I just thought people might appreciate me bringing a few of them to -"

“...and there’s a stack of them in the bathroom, too,” he continued, "which I thought was odd, and outside on the back lawn. Someone laid them across the grass to spell out OZ. Is this magazine about The Wizard of -"

"No! POZ.“ I fingered the cover’s masthead like I was teaching the alphabet on Sesame Street. ”P-O-Z? POZ. POZ Magazine."

“Well, it just says ’OZ’ in the back yard now. I think they had to make room for the lawn chairs.”

This man was irritating me. He hadn’t even begun to ask about my thoughts on fame or on balancing family with my public persona or about Having It All. I became concerned with his comprehension skills.

“I wouldn’t worry about it,” he went on, “it’s sprinkling now so I don’t think anybody is out there anyway.”

"It’s what?" I asked. I scrambled up and dashed outside to retrieve what were now slightly soggy copies of the magazine off the lawn.

I settled for a while on the back patio, carefully dabbing the magazine covers and giving the crowd inside some relief from the excitement of my presence. I wondered if the Kardashians ever had to dry their own magazines. I suddenly realized how very alike we are, those girls and I. Well, maybe not Kim. Unlike her, my sex video was a crystal meth-induced camera phone escapade that I have refused to commercialize. No, Khloe is my true soul mate. The sassy one.

The party’s host, Sebastian, stepped outside.

“Hello, Sebastian. You have a lovely home,” I offered. Graciousness. So important. “I wonder if I might trouble you for some ballpoint pens. The Sharpies I brought are going to bleed if I have to autograph these wet magazines...”

“I was just going to ask you about that,” he said. “The buffet table seems to have been set up for... some sort of signing?” I had arrived early to hang the poster-sized blowup of the cover in just the right spot, scotch taped over Sebastian’s original Keith Haring lithograph. The Haring seemed a tad pretentious anyway.

“Yes, that’s right,” I answered. He had an expression that I clearly mistook for annoyance.

“There are magazines stacked all over the buffet table,” he said.

I raised an eyebrow. “I brought plenty to accommodate the crowd so -”

"There are only fifteen people here..."

Sebastian breathed a little too strongly through his nostrils for a moment. “If it’s all the same to you,” he said, rather slowly, “I really need the buffet table.”

“You need the buffet table?” This was the first I had heard of this. I bet Khloe has people for this sort of thing.

Jealousy is a common response to intense fame. You see it all the time. Well, maybe not you. But I do.

My road to sizzling celebrity began a few months ago, when I was invited to appear on the cover of POZ Magazine because of an essay I had contributed about HIV stigma among gay men. I give full credit to the staff of the publication, for instinctively knowing exactly what the world needs right now.

And if you’re thinking the answer is me, well, that’s lovely and understandable but not really true. What the world needs now is a message of tolerance toward people living with HIV.

Negotiations between myself and the publication were heated, I will admit. First they claimed Leibovitz was busy and Scavullo was dead, and then they rejected my request for body painting at the studio to sculpt my abs. Oh, and I had to wear a shirt. 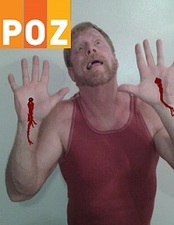 I don’t mean to embarrass anyone, but allow me to share with you portions of the email I received from the POZ editorial team. They responded together, they said, to put a stop to my “playing staff members against one another and telling us each that you liked us best or that a fellow staff person wanted us fired.” Like I would be caught doing that.

They then went on to say that “while we appreciate your enthusiasm for this cover shoot, we don’t believe that having you pictured in the throes of actual stigmata would serve the story or our readership.” My concept was meant to be ironic, although I can’t really explain why and it’s my response to most situations in which I don’t get my way.

"And although we do acknowledge that Carrie is an iconic film about stigma,“ the irksome memo continued, ”our readers might respond unfavorably to a cover model with a bucket of pig’s blood dumped on their head. People with HIV are sensitive about blood. Even pig’s blood. Your being outfitted in a prom dress does little to minimize the impact."

They said nothing about the remake of Carrie to be released this fall, and the obvious promotional tie-ins I had outlined in my proposal. Which is all to say that we must stand tall against those who wish to blunt our artistic vision. 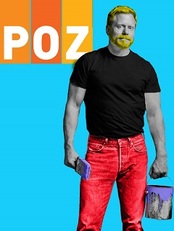 Now that the June issue has been released, available everywhere fine periodicals about HIV are available, I’m mulling over the idea of a multi-city tour or better yet, an AIDS benefit in which famous artists recreate my POZ Magazine cover, people like Peter Max or Warhol, and then auction them off. The powers that be at POZ, as you might guess, say this idea is quite impossible for reasons they refuse to enumerate.

I considered all this as the poz social was drawing to a close and I was slipping copies of the issue under the windshield wipers of the cars on the street. Face down, of course, so my face might greet the driver as he settles in his seat. I continued up the neighboring blocks, because good literature appeals to everyone and Sebastian was giving me attitude for the boxes of magazines he claimed were blocking his driveway.

Should you care for a personal appearance at your next gala, by all means contact me. I require the usual fees, Perrier water, and Intelence and Norvir and Isentress and Flomax. And please find me a sizable entourage, to do entouragey things with me.

All kidding aside, I could not be more humbled and heartened by the response to my POZ Magazine essay on HIV stigma and gay male community. Even if you have read the piece, I would encourage you to visit the comments section on the POZ site -- now with over 100 comments that will inspire you, anger you, and break your heart.