When it comes to HIV prevention messages, most of the time the messages center on two groups, men who have sex with men and of these campaigns, it’s mostly men of color. The second targeted campaigns are directed to women, a group that is rising in rates of infection.

Yet there’s another community that most HIV prevention doesn’t target or seems to not have on their radar. I call that group the ’forgotten’ community or more commonly known as men of color who identify as straight. In this absence of direct marketing we have a situation where complacency is fostered and the education of protecting oneself against HIV is irrelevant as the messages in not targeting straight men creates a self-dialogue where a heterosexual man may think, “I’m not gay therefore I don’t have to worry about HIV”. An unfortunate statement that is far from the truth.

Thank God for a new program introduced by Iris House which is based in Harlem and has an office in the Bronx which has taken the initiative to give focus to this overlook community. The program is called Keepit100nyc with the subheading of ’Love Your Life" a program designed for men of color between the ages of 18-24. As reported by the Executive Director of Iris House Ingrid Floyd she makes it clear that ’it takes a village’ as she lays out the approach of the interventions.

I’ve always felt that when it came to any type of HIV interventions within the community, overlooked are the neighborhood members who are either directly or indirectly affected by this disease. Harlem is one of the hardest hit areas when it comes to rates of infection and recognizing that Iris House uses several innovated ways to reach straight identified men. The first way is that it trains and works with local barbers to provide information and education on HIV to its patrons. This reduces barriers of men who may avoid agencies that provide HIV interventions based on the stigma of simply walking in the physical building itself.

Anyone familiar with barbershops know that it’s a conduit of information as men talk about random issues and as you wait for your turn in the chair you are privy to the conversations happening even if you’re not participating in the talks. This over hearing of info, especially when its of HIV interventions is ideal as there’s something of value when you hear straight men talking of a subject that is usually sung by gay men, of which a straight man may dismiss based on the sexuality of the messenger.

According to Keepit100nyc coordinator Serge Jean, he discusses the most important part of the intervention which has participants in the program which is called Nia Interventions. Nia which is Swahili for ’purpose’ is a six hour, two to four session small group interventions. The goals of this intervention are to educate African American men about HIV/AIDS and its effect on their community, bring groups of men together, increase motivation to reduce risks, and help men learn new skills to protect themselves and others by promoting condom use and increasing intentions to use condoms.

Videos of straight men talking to their female sexual partners of condom usage and even discussing safe sex with their homeboys bring an authentic feel as media plays a big part of not only how we learn about HIV but again it breaks and shatter the myth that only gay men are affected by this disease.

By showing real situations in the videos that straights can identify with, it debunks the falseness of straight men and condom usage and informs them that condom usage with their female partners are not just about preventing pregnancy. It also introduces the most important piece which is how you talk to your female partner about using condoms without the face of mistrust or one of the partners cheating appearing. It makes condom usage a symbol of caring about the health of yourself and your partner.

For those who test positive the program also provides case management which can help navigate participants to better care and support which goes beyond the programs interventions. Most importantly it connects men to health care within their community without the belief that quality care only exist outside your zip code.

I feel that when it comes to HIV we all should be talking about it. It’s not about focusing on how you identify sexually. It’s about how to make accessible information to those who may not check off on the intake sheet that they’re gay.

It’s making the invisible, visible and most of all it’s about keeping it real and recognizing that we can no longer have a ’forgotten’ community and especially in communities of color, shattering that fairy tale that straights are not affected. We have to become affected, no matter how we identify, before we become infected.

Hats off to you Iris House for keeping it real and helping men of color love their life!!

For more info click on the link or go to 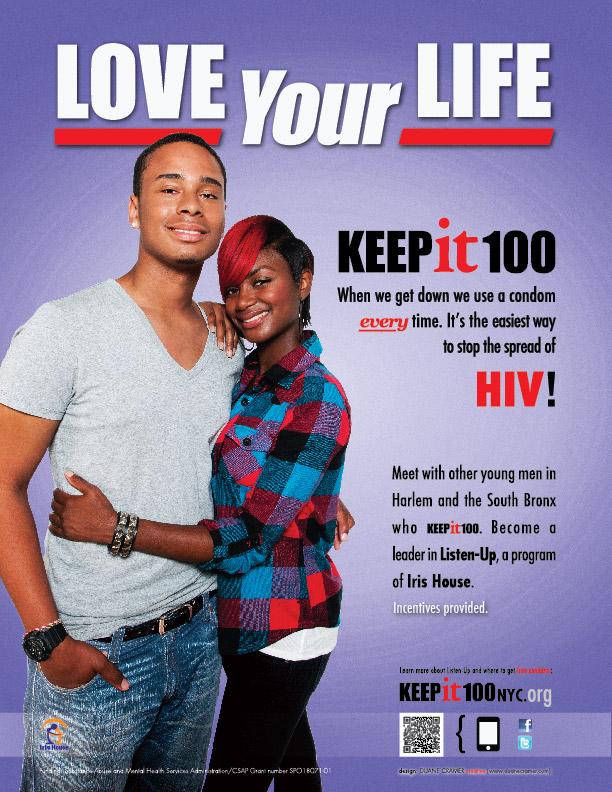