The Immune System, Aging, and HIV

Little more than a decade ago, it was almost inconceivable that the issue of aging with HIV infection would emerge as an important concern. But it has now become clear that antiretroviral therapy can suppress virus replication for many years--likely for life--in most people who can access the drugs, and the opportunistic infections that were once the primary causes of illness have largely evanesced everywhere treatment is available. Morbidity and mortality from HIV infection has plummeted, and the survival of HIV-positive individuals is edging ever closer to that of comparable HIV-negative people. With the specter of AIDS having finally been chased from the near horizon, attention has turned to health problems that may lie further down the road. 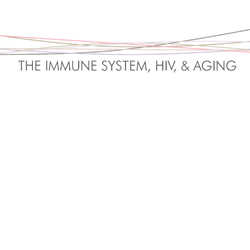 Looming largest are illnesses typically associated with aging. Examples include cardiovascular, kidney, and liver disease; bone loss and increased fracture risk; frailty; cognitive impairment; and cancer. Evidence is accumulating that the risk of these conditions is elevated in HIV-positive individuals and, in some cases, they may be occurring at a younger age, on average, than is typically observed among comparable HIV-negative populations. As the proportion of older individuals living with HIV grows, there is an urgent need to understand how a broad array of factors may be contributing to this phenomenon; these factors include inflammation, immune dysregulation, polypharmacy, long-term drug toxicities, and coinfections and comorbidities that are disproportionally prevalent among people with HIV, such as hepatitis B and C, current or former substance-use disorders, stress, and depression.

It is important to emphasize that the reported elevations in risk for aging-associated diseases among people with HIV (compared to their HIV-negative counterparts) are typically relatively small. There are also inconsistencies between studies and as yet unresolved controversies regarding the extent to which HIV infection is an independent risk factor for specific illnesses. So while there is cause for vigilance and concern, there is no reason to panic, and it is likely that many HIV-positive people will not face a significant additional hazard of aging-associated conditions. As a general recommendation, HIV-positive individuals should consider the lifestyle factors that are now known or expected to maximize health once a person reaches old age; these include daily exercise, a healthy diet, maintaining low blood pressure and cholesterol, and avoiding substance abuse and excess fat gain.

In a new report published by the Treatment Action Group, Richard Jefferys and I outline current scientific knowledge regarding the immunologic connections between HIV and aging, and provide an introduction to some of the unresolved questions that are being addressed--or need to be addressed--by research.

Have a look, give it a read, and let us know your thoughts!