The Timeless Virtue of The Normal Heart 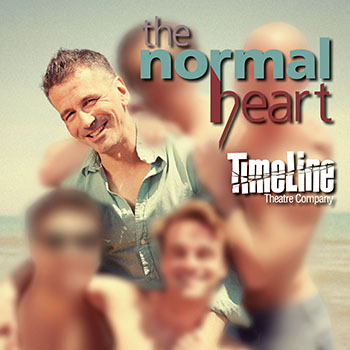 Larry Kramer’s The Normal Heart returns to Chicago for the first time since its Tony Award-winning Broadway revival in 2011.

This fall, TimeLine Theatre Company will breathe new life into one of the strongest historical dramas of the 20th Century.

For younger audiences who never knew the dark, deadly days of the early epidemic, the play relives the fear and panic of the early 1980s in urban America. To expose young viewers to this era--and the grassroots activism it galvanize--seemed to me its greatest virtue.

But of course The Normal Heart is so much more.

TimeLine Theatre Company graciously provided me a behind-the-scenes viewing of The Normal Heart, directed by Nick Bowling. I was moved to tears.

Yes, the drama chronicles the dawning of AIDS activism in the wake of unconscionable political and institutional neglect. Fueled by judgmental and homophobic disregard, the early crisis gained strength in the absence of a robust government response. Yet a humanistic virtue will always be at the heart of this drama.

Timeless and poignant, the play’s call to action is as relevant now as it was when play debuted in 1985.

Ned Weeks, played by David Cromer, is a confrontational activist in New York, fighting to bring attention to a disease plaguing gay men. He organizes likeminded individuals and creates a grassroots movement that struggles to gain steam in a culture that would rather turn a blind eye.

That’s not merely a glimpse at where we were. It’s a commentary of where we are today.

Modern medicine has given many affected individuals opportunities to survive and thrive with HIV, where once they faced certain death. Yet the stigma associated with HIV continues to result in delayed or deferred care for hundreds of thousands of Americans with HIV.

The AIDS Foundation of Chicago (AFC) estimates that more than 35,000 people are living with HIV in the Chicago metropolitan area; however, less than half enjoy access to care. Half. That means that less than 50 percent of this population is living with a life-threatening disease. Without interventions, they will remain at risk of serious health decline. What’s more, studies indicate that more than 6,000 individuals in metropolitan Chicago don’t even know that they are HIV-infected. This group is at high risk for other serious medical conditions and may inadvertently be exposing others to HIV.

The Normal Heart confronts these disparities and it does so with gifted acting and storytelling.

Every character is deeply complex. Even in rehearsals, the acting was so crisp and powerful that I looked beyond the lack of costumes, beyond the missing props, beyond the bare stage, and I returned to the early ’80s. I stood with Ned who knelt by his partner’s bed in the hospital room. I sat in the grassroots campaign office, as the fledgling organization struggled to get the government’s attention. I was there because the characters became real to me.

Yes, I encourage young people to see The Normal Heart for historical reasons. But more than that, this drama is about our time. It’s about spurring people into action whether they’re gay or straight, government officials or private citizens. Everybody has a role to play in ending this epidemic, and we can only end it if we work together.

AFC is selling tickets to The Normal Heart for two nights: Saturday, November 2 and Sunday, December 1, which is World AIDS Day. Proceeds benefit AFC--but only on these dates and only if you reserve your seat through AFC.