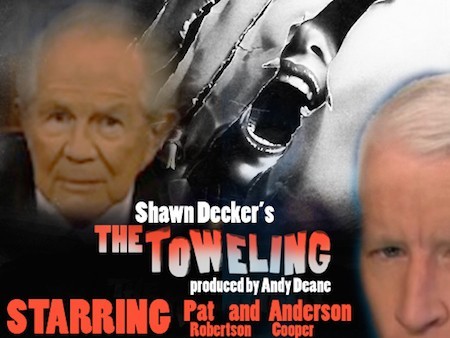 Gary lays naked on his bed in his modest NYC apartment in the East Village. The window is cracked open and a breeze comes in as he channel surfs. He shouts towards the cracked bathroom door that is several feet from the bed. “Save some hot water for me!” Gary tugs the sheet with his toes, managing to cover his knees without the use of either hand. “Don’t pretend you can’t hear me... ACE?” A loud laugh echoes from the shower. “You jackass,” Gary says as he sighs, speeding through the channels before landing on a friendly face. “Oh, Anderson- now we’re talking.”

“Alright Gary, it’s all yours-”

“Then pause that shit, Gary.” Ace grabs a toothbrush, squeezes some paste onto it and hurriedly begins to brush as Gary bursts into laughter.  “Whash sho funny?” No answer. Just more laughing.  “Paush it, Gauwee!!!” Ace spits into the sink and rushes to the bedroom, which is the living room as well. Gary manages to shift his attention from Anderson to Ace. “Sorry, you took too long, missed all the good parts.” Gary says teasingly as Ace stands beside him, dripping wet and still naked.

“Back it up- I want to see something funny.” Ace demands.

“I guess it’s only fair that we both get to see something funny right now,” Gary says, prompting Ace to suck in his stomach before making a play for control of the remote. They wrestle for it until Gary agrees to Ace’s demands. “Alright, alright, I’ll back it up, geesh... but shut up because you gotta hear this.”

Ace starts heading to the bathroom; but Gary stops him just long enough to grab a condom, wrapper and stack of tissues from the nightstand, plopping them into Ace’s hand. Gary grabs Ace’s elbow. “And don’t forget to take your prep.” “I never do,” Ace replies.

“Any side effects?”
“No- two months in and I don’t notice anything...”
“You know, Ace,” Gary begins. “I’m undetectable, we use condoms... you don’t have to-” “Shush, Gary,” Ace says. "I’m not scared and don’t mind. It’s more for the guys out there who don’t know their status, anyway, they’re the ones I’m worried about."
“Well, you shouldn’t be worrying about them at all,” Gary says.
“Oh, ready to lock this down are we?” Ace asks.

Ace leans into Gary for a quick kiss before heading to the bathroom, where he discards the sex paraphernalia into the trash can before gazing into the mirror, shaking his head and smiling to himself. Ace flicks open the mirrored  cabinet door and retrieves a prescription bottle. Before he opens it, he looks around for a towel but doesn’t see one. “Please don’t tell me you are out of clean towels,” he whispers to himself before squatting down to check the cabinets underneath the sink.

As Ace emerges from the bathroom he sees Gary laying on the bed, only now he has a white towel over his face. “You goof, playing peek-a-boo with yourself?” Ace asks as he walks toward Gary. “Give me that-”

Before he can finish his sentence, the towel flies up from Gary’s face and floats above the bed. Gary’s eyes are open, but are lifeless and white. Ace stumbles back towards the bathroom, reaching behind him for the doorway as the towel floating above the bed takes on the form and physical characteristics of a bat, flapping its wings. Through the cracked window several more towels fly in and head straight for Ace, knocking him into the bathroom and sending him spiraling through the shower curtain and causing him to fall into the bathtub.

The bathroom door closes. The only sounds to be heard throughout Gary’s apartment now is the crackle of city life on the streets below and Anderson Cooper sarcastically taking Pat Roberston’s warning to task: “Overseas... everything overseas is bacteria... you just can’t even imagine. I’m starting to think that we’d be better off not traveling at all.”

I want to thank everyone who made The Toweling possible, including my friend and horror author, Andy Deane. Andy generously donated $5 to my cause when I posted that my towels had AIDS on Facebook in a desperate attempt to swindle his Friends out of money. Without his contribution this story would not have been possible. Please repay him by buying his music (new Bella Morte album, Exorcisms is out NOW on CD and vinyl!) and real horror books (including The Sticks!).

I’d also like to thank Pat Robertson and Anderson Cooper for their roles. Without Pat’s imagination stories like The Toweling would not be possible.