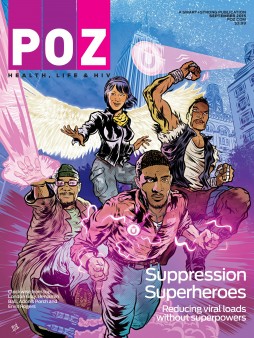 I Need a Hero: Reducing Viral Loads Without Superpowers

The September 2015 issue of POZ magazine is online.

Here’s an excerpt from my editor’s letter:


Fighting for justice was and still is what superheroes represent.

Despite not really knowing the source material, I did love watching Saturday morning cartoons, especially Super Friends, which featured Superman, Batman and Robin, Wonder Woman, and Aquaman. Their aggression was trumped by their teamwork (and their skintight outfits).

The Undetectables--a new program from New York City’s Housing Works that helps participants reduce their viral loads--taps into that superhero spirit. The program uses a comic book series to educate participants about HIV treatment adherence. That series was the inspiration for our cover.

The Undetectables comic books include fictional characters, but our cover and the accompanying feature article include real participants in the program. Click here to read how London Gray, Benjamin Ball, Adonis Porch and Ervin Rogers are lowering their viral loads without superpowers.

To read my complete letter from the editor, click here.