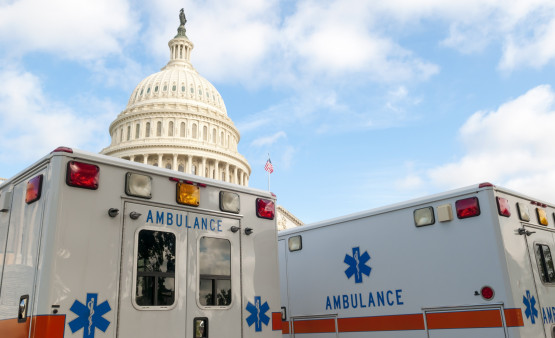 Time Is Ticking on Congress to Pass COVID-19 Relief

Meanwhile, the House subcommittee responsible for many federal HIV programs has approved its funding for fiscal year 2021.

As COVID-19 continues to devastate the United States, July is proving to be busy in Washington, D.C. While the Trump administration continues to downplay the pandemic and encourage the country to reopen, Congress is taking action to continue to fund programs that will assist in fighting the pandemic through the appropriations process.

July will also be important for millions of people who lost their jobs in the wake of COVID-19’s spread, as federal unemployment relief provided by a previous Congressional stimulus package is set to expire at the end of the month.

In approximately 120 days, more than 3 million people have been diagnosed with COVID-19 in the U.S., with more than 130,000 people dying from the virus. Mass shutdowns have taken place all over the country, resulting in approximately 30 million Americans claiming unemployment benefits.

For the week ending on July 5, 24 states saw increases in positive cases that exceed the 5% positivity rate of which the World Health Organization has warned. The organization released guidelines that if new infection rates exceed 5%, it would be an indicator that the virus was not well controlled.

Additionally, while there has been a steady decrease in the number of deaths nationwide, states such as Alabama, Florida, South Carolina, Texas and Tennessee have seen worrying increases over the last two weeks. Overall, cases have continued to decline in the Northeast — but have begun to significantly climb in the Midwest and sections of the South.

The Trump administration’s reaction to this increase in cases has not been in line with warnings and guidance from scientists and other public health officials, and Trump’s remarks have downplayed the severity of the epidemic. According to CNBC, these remarks have been in direct contrast with statements from key public health officials within the administration, including Dr. Anthony Fauci.

Additionally, the president has taken steps to withdraw from the World Health Organization, citing allegations of mishandling of the COVID-19 pandemic and what he views as undue submission to Chinese influence as reasons for the withdrawal. According to a recent story in The Hill, Trump is placing additional pressure on states in a push to reopen schools, threatening to cut federal aid to schools who do not reopen.

As stimulus funding continues to dry up, Congress is considering additional funding to help the country cope with the impacts of COVID-19. Congress is faced with an additional COVID dilemma as unemployment assistance that was included in an earlier stimulus package is set to run out at the end of July. While Republican members of Congress wanted to wait and see what effect the already distributed stimulus funds would have on the economy before passing another package, the recent surge in cases and subsequent scrapping of many states’ reopening plans necessitates immediate action.

Though the HEROES Act has passed in the House of Representatives, many Senate Republicans are set against passing it. According to a recent article in Forbes, Senate Republicans see this bill as a “liberal wish list.” With several contentious Senate races ramping up as we come closer to November, senators will likely be using this time to bring back a win to their constituents before the August recess.

The House side has been busy working through appropriations bills. This past Tuesday, the United States House Appropriations Subcommittee on Labor, Health and Human Services, Education and Related Agencies approved its FY 2021 appropriations on a 9-6 vote along party lines. The Labor-HHS appropriations subcommittee is responsible for funding a variety of programs important to HIV advocates, including the Ryan White HIV/AIDS Program. While a full committee meeting date has not been set for this appropriations bill, this is a bill to watch as the nation continues to confront COVID-19.

The administration and Congress will largely be focused on COVID-19 in the upcoming weeks. With appropriations coming through the House, things will likely remain busy for congressional offices until the August break.

Check back with AIDS United to stay up to date on the latest happenings in Washington impacting those impacted by HIV.