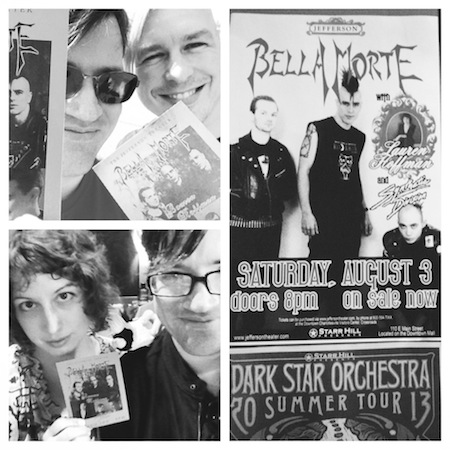 Tomorrow night I’ll be playing a Synthetic Division show, opening for my friends in Bella Morte. Another talented musician and friend, Lauren Hoffman, will also be playing. The venue is the 800-capacity venue, The Jefferson. It’s a big gig.

When I first moved to Charlottesville in 1998, one of the reasons was to pursue my music. It was just a cooler town than Waynesboro, where I grew up. Plus, Dave Matthews had broken out of Charlottesville, so why not Synthetic Division as well?

Well, the plan changed when I got really sick in 1999. My t-cells crashed, my viral load skyrocketed. I had no energy. I sometimes complain today about waning energy levels- but in ’99, getting off the couch was a chore. Gwenn had just moved in with me- the ruse of my failing health revealed by our newfound proximity- and I remember her coming home from work around 4 pm. And me being proud to tell her, “I got myself some orange juice!”

Around that time, the local paper did a story on us. It would be our first interview as a couple. I was used to being a poster boy for AIDS, having graced the cover of Poz a couple of years earlier, vibrantly smiling out to the world- my dimple on full display. Gwenn was about to compete at Miss Virginia, and the paper asked her to bring her Miss Powhatan crown to the photo shoot in the park.

The writer was a good guy, I hit it off with him and gave him a CD. “Aside from having HIV, I also do music,” I said not-so-slyly. “Think you can put that in the story?” Charlottesville needed to know their next Dave Matthews was in town, it was more of a humble public service announcement than anything else. “Sure,” the writer said. “Have you heard of Bella Morte?” He gave me a CD, and said their bass player worked at a place called the Cosmic Coyote and he was the person who booked local acts like Synthetic Division.

The album was Where Shadows Lie, and I was hooked. I couldn’t believe an electronic goth act was based in Charlottesville. They had a sound that was every bit as capable as my heroes in Depeche Mode...

Before I could pay that bass player a visit to pitch my band, the newspaper article came out. The cover read, “LOVE AND DEATH”. It was a close-up of me, not really smiling. A Mona Lisa expression. I couldn’t really see my face, my eyes were focused on that one word: “DEATH”. The writer apologized profusely, cover text wasn’t his real estate. The article itself was wonderful and full of heart. And even though my t-cells had dipped well below 100 for the first, and I was actively in the process of dying, I was still taken aback by that word.

After I started HIV meds, I decided I better get that music career going. So I paid Gopal of Bella Morte a visit at the Coyote. When I handed him my music, he immediately put it in the CD player. My songs filled the store. I was terrified. After the six songs were over, he handed the CD back. “So, when do you wanna play?”  On spot, we picked a date. When the show came 6 weeks later, I was hoping no one would notice that half of the 25-minute set had been written in the previous 6 weeks...

When the show came, Gopal helped me set up. Gwenn carried my gear in, because she was worried I was too weak to carry my keyboards down the steps at the Tokyo Rose. The one thing a hemophiliac wants to avoid before a show is tumbling down the stairs. Ultimately, I made it through the set, and any mistakes made during my set went unnoticed since Gopal and Gwenn were the only people in the room who’d ever heard my music.

That night started a series of live shows, each one getting better as my health returned. I struck up friendships with Andy, the lead singer, whom I’d sent a fan-email to before I went to see my first show at the Tokyo Rose a few months before I played there myself. I remember oversharing in that email, talking about being sick and just moving the C’ville, and of course my band. Which was just me at the time, by the way. He dedicated a song to me- I walked into that first show alone... when I came home, I told Gwenn, “YOU HAVE TO GO NEXT TIME, IT WAS AWESOME!”

A few years later Andy introduced me to Lauren, another local musician. I didn’t know it at the time, but Lauren had a major label deal at 18. Her experiences with the music industry were what I thought I wanted- until I got to know her and she explained what a major label can do to basically ignore/misrepresent you. As I discovered Lauren’s music after becoming friends with her, I stood in awe of her gift as a songwriter.  Like Bella Morte, she had a talent for writing music that inspires genuine emotional reactions.

Being friends with Bella Morte and Lauren Hoffman was a good education for me, and my little misinformed fantasies about “making it in music” were laid to rest- I realized that what’s really important is making good music... creating songs you are proud of that properly represent the emotions that come with this shared human experience...

That is making it in music.

Today, I’m still close with everyone playing this show. One of my best friends since high school, Josh, joined me on my first tour with Bella Morte in 2010 and subsequent shows since then. He lives in Los Angeles and flew into town just to play this show.  It’s so much better having a friend onstage than standing up there alone, as I did well over ten years ago... and now, I’m strong enough to carry my own equipment..