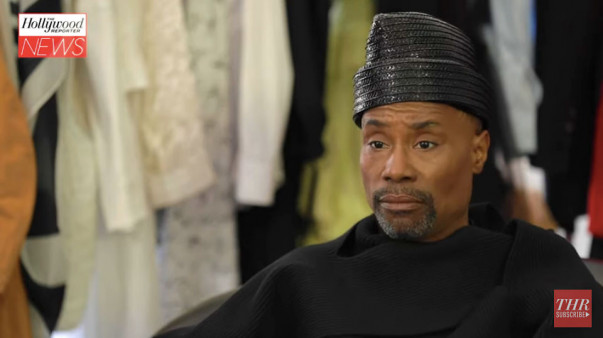 Click to watch a May 2021 video in which Billy Porter talks about his HIV experiences. YouTube/The Hollywood Reporter

AIDS United’s HIV-themed review of the year (complete with tweets!) gives you 10 reasons to celebrate 2021.

What a year it has been! Whether we were hearing celebrity testimonies, honoring our AIDS United family as advocates or reading the updated National HIV Strategy, it seemed like our community of advocates was always uplifting people living with and vulnerable to HIV. As we wrap up our year at AIDS United and celebrate our tenth anniversary, we want to acknowledge our top ten moments to celebrate 2021.

1. Billy Porter shares his story of living with HIV.

In May, Tony-award-winning performer Billy Porter shared that he has been living with HIV for 14 years. In a powerful interview with The Hollywood Reporter, Porter talked about living with HIV and the shame he felt silenced him for many years. And then quarantine forced him to sit and listen to his thoughts for the first time in a while.

My truth. In my time. Thank you @THR. https://t.co/QWLe8jfdrc

2. Harold Phillips is appointed the head of the Office on National AIDS Policy.

Not only does Harold Phillips have more than 20 years of experience in the HIV policy field, he is also a Black, gay man living with HIV. His lived experience, combined with his dedication to his communities, will help us reach the goal of ending the HIV epidemic by the end of the decade. Phillips spoke at our fall AIDSWatch, hinting about what he was working on for the promised National HIV/AIDS Strategy update schedule for World AIDS Day 2021.

The @POTUS’s priorities to be included or strengthened in the updated National HIV/AIDS Strategies, as presented by Harold Phillips, director White House Office of National AIDS Policy. #AIDSWatch pic.twitter.com/WH071NuiSH

This July, we helped our friends at Prevention Access Campaign celebrate five years of U=U — or undetectable equals untransmittable — which means that a person’s viral load is so low that the virus can no longer be passed to anyone. What started out as a grassroots movement created by the Prevention Access Campaign has quickly blossomed into a nationally known concept. The U=U campaign has revolutionized what it means to live and love with HIV and how health care providers should talk to their patients about HIV.

Did you miss the #UequalsUat5 U=U birthday celebration? Stream any time here!https://t.co/ueQejyXFqt#UequalsU

After a year of increased political attacks against transgender people, Tori Cooper hopes to use her position on PACHA to advocate for both the transgender community and non-binary folks. In an interview with NPR, Coopers says, “Being the first of anything is always daunting. But it also is a great opportunity to break down barriers and open doors for other people as well.” We stand with her and can’t wait to see how she reinvents the position to uplift the LGBTQ community.

.@HRC’s Tori Cooper is the first Black transgender woman ever appointed to the Presidential Advisory Council on HIV/AIDS. We’re grateful for her voice and her longtime advocacy. Congratulations on this historic appointment! https://t.co/DyDBT5Nmdo

Do we really even need to explain ourselves here? Lil Nas X continues to impress us with his musical performances and amazing outfits, but also with his capacity to care for and uplift the Black LGBTQ community in the South. Lil Nas X hails from Atlanta, Georgia. He recently made a trip down to his home city to talk with HIV advocates about the epidemic in the South. Earlier in the year, when his debut album Montero released, he created a baby registry to raise money for organizations on the frontlines of ending the HIV epidemic in the South.

Congrats @LilNasX! We want to give a shoutout to our current and past partners on this list:

93,331 people died from overdose deaths in 2020 in the U.S. alone. We can’t let this happen again.  Supervised injection sites and syringe services programs have proven time and time again to be effective in preventing overdose deaths, providing clean needles and opening up opportunities to access health care. New York is following the evidence. It is time we implement harm reduction federally if we want to end the HIV epidemic and prevent overdose related deaths.

In September, we hosted our second Fall AIDSWatch — a virtual event to help us connect as advocates and guide us as we strategize to end the U.S. HIV epidemic. This year, our panelists focused on four major topics: quality of life, health care access expansion, voting, civil rights and justice. Harold Phillips, the director of the Office of National AIDS Policy, started off the event with an update on the National HIV/AIDS Strategy, which was recently released on World AIDS Day 2021.

Throughout the panels, participants were encouraged to ask questions and interact with our knowledgeable experts. Some topics we discussed were aging with HIV,  discrimination in health care settings, making our advocacy accessible to all and how we can meaningfully involve people living with and impacted by HIV in this work.

“Ultimately the work we’re doing at AIDSWatch is about ensuring basic human rights for everybody.” — Jaron Benjamin from @housingworks #AIDSWatch

Our very own Jesse Milan, Jr., Carl Baloney Jr. and Marvell Terry II were named to “2021 POZ 100” for the differences they are making in the HIV community. This year’s list focused on Black advocates in the United States. Although POZ points out that HIV does not discriminate, a history of health inequities and barriers to accessing quality care have caused increases in the number of Black people living with HIV. We cannot end this epidemic until we address these health inequities and work towards equitable care for all. By highlighting these advocates, POZ hopes to raise awareness for their work and get us one step closer to ending the HIV epidemic.

Our very own Jesse Milan Jr., Carl Baloney Jr. and Marvell L. Terry II were recognized in @pozmagazine’s “The 2021 POZ 100.” This year, POZ is celebrating Black advocates who have made a difference in the HIV community. Read the full list: https://t.co/2lxwTGXaB4

AIDS United celebrated 10 years of service on World AIDS Day with a virtual celebration and a wine and cheese tasting. The event was hosted by actor and advocate Daniel Franzese and singer-songwriter Kimberley Locke. During the celebration, we awarded 12 awards to people working to end the HIV epidemic, including actor Judith Light and Speaker Nancy Pelosi.

We are so thankful for an administration that is approaching the HIV epidemic from a holistic perspective. We cannot end the HIV epidemic unless we prioritize all those impacted by  systemic racism in the health system. Biden’s proposed budget, which was introduced this World AIDS Day, allocates $670 million to partner with Veterans Affairs, Labor, Education, Agriculture and Housing and Urban Development to end the epidemic by the end of the decade.

We are ready to work closely with the administrations to implement the new NHAS and end the HIV epidemic by the end of the decade. Read our CEO’s full remarks following @POTUS’s updated HIV/AIDS strategy on #WorldAIDSDay: https://t.co/HW66w7zy1J